Online petition drive to save Americorps strikes a chord 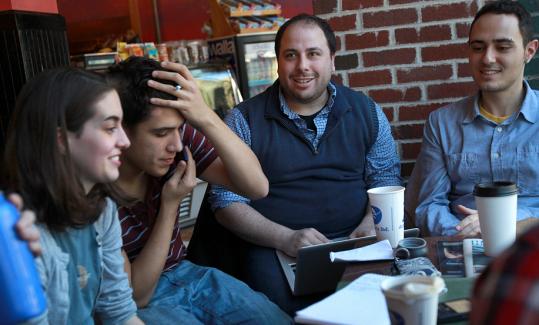 Caleb Jonas (second from right) is getting help in his drive from Kate Leist and Sam Novey, both Harvard students, and Frank Marino from Northeastern. (Suzanne Kreiter/Globe Staff)
By Linda Matchan Globe Staff / February 26, 2011

Caleb Jonas is a mellow, industrious Harvard graduate student who occasionally signs petitions but had never circulated one.

Until two weeks ago. That’s when he learned that a cause close to his heart — AmeriCorps, the national service program — was targeted for elimination by House Republicans. Someone told him about Change.org, an online organizing platform to circulate petitions, and he decided to give a Save AmeriCorps campaign a try.

“I wanted to see if there is a constituency that would agree with me,’’ said Jonas, 26, who spent a year serving with AmeriCorps in Minnesota.

Was there ever. Armed with a laptop computer, he set up headquarters in Darwin’s Ltd. coffee shop near Harvard Square on Feb. 9, created the online petition, and invited four people to sign it, then a few more.

“I figured I personally knew about 50 people who wouldn’t just delete the e-mail and were computer-literate,’’ he said. “If they each found 10 people who cared, I thought I’d get to 500.’’

He didn’t expect that his campaign would strike a chord with tens of thousands of young people across the country. Over the next few days, as word came that the House of Representatives had passed a bill to cut $61 billion from the federal budget, including AmeriCorps’ funding, it shifted into a massive, national grass-roots effort to urge the Senate to save the program. By late yesterday, nearly 105,000 people had signed the petition.

“I am pretty fairly shocked,’’ said Jonas, who is pursuing a joint degree at Harvard and Stanford University.

Ben Rattray, founder and chief executive of Change.org, which launched four years ago, said the AmeriCorps petition has generated more traffic than any other on Change.org except for one that dealt with rape in South Africa. “This is a pretty rare achievement,’’ Rattray said.

Jonas’s petition has also generated impassioned responses and stories from across the political spectrum, including AmeriCorps alumni as well as teachers and nonprofits that rely on AmeriCorps volunteers.

“What’s unique and impressive about this kid is that he’s not a big nonprofit that has an e-mail list of hundreds of thousands or millions of people. Al Gore has an [e-mail] list of 2 million, and for him to get 200,000 people to sign a petition is pretty impressive. If you can get 10 percent of an e-mail list to sign it, [it] is a successful benchmark. This kid, I imagine, did not have an e-mail list of 2 million. He was actively recruiting people to his cause . . . starting from nothing. This happens rarely.’’

How does Geer account for it? “It’s a compelling issue. He’s speaking from a place of personal experience. And I think it’s the timing in the moment. This is a particularly active time in the world of grass-roots organizing. There are the examples of Egypt and Libya and also Wisconsin and Ohio, places organizing around collective bargaining. Those protests are undoubtedly fueled by a sense of solidarity with people around the world.’’

AmeriCorps is a national network of thousands of service programs created in 1994 by President Clinton whose 83,000 members teach, mentor, provide disaster relief, build homes, and do health education and environmental work, among other jobs. Organizations supported by AmeriCorps include Boston-based City Year, Habitat for Humanity, Teach for America, and Boys and Girls Clubs of America.

Jonas worked as an AmeriCorps VISTA member in St. Paul, building a coalition of tutoring programs for at-risk and low-income kids. “It was a real way for me to make a difference in the community,’’ he said. “I’ve seen it do amazingly beneficial things for at-risk families and communities.’’

Thursday morning, Jonas and six friends convened at the coffee shop to keep the momentum going. Kate Leist, 21, a Harvard biology major, is signed up with Teach for America for the next two years, and everyone had friends who had AmeriCorps experience or had done volunteer service work themselves.

“Our generation wants to make a difference, one on one,’’ said Sarah Groh, 22, a student at Lesley University.

On Thursday, they were not only monitoring the petition but directing people to a rally at Harvard University that night to protest a visit by House majority leader Eric Cantor, who was speaking there. Their strategy was to sort through the tens of thousands of names on the petition and isolate those from Cantor’s home constituency in Virginia. (There were 312). They wanted to present the list to him that evening, with a cover letter from one of his constituents.

It worked. Jonas got the letter and petition to Cantor “through an intermediary,’’ he said.

“As impressive as it would have been to give him 100,000 names, this is not about raw numbers but real activities,’’ Jonas said. “These are not just anonymous faces on the Internet, but real people in his community providing real services.’’