Increasingly, traffickers are using remote areas of Mass., such as Ashby, to distribute narcotics 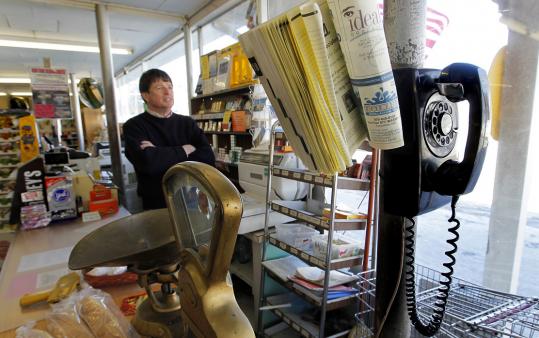 Owner Bill Arnold still has an old-style rotary phone available for use at the Ashby Market. (Cheryl Senter for The Boston Globe)
By Maria Cramer Globe Staff / February 25, 2011

ASHBY — People usually come to this rural, forested town about 60 miles northwest of Boston to hike along Willard Brook or camp near Damon Pond.

The community of about 3,000 has only five full-time police officers, who work out of a doublewide trailer behind Town Hall.

“It’s a sleepy, quiet town,’’ said Beth Ann Scheid, the town’s tax collector. “You have to want to be here to be here.’’

But in recent years, the town has had unwelcome visitors.

Drug dealers have been using quiet side roads and nearby state parks to pass cocaine and heroin to other dealers or to sell drugs to addicts, many of whom drive there from New Hampshire towns just over the border. Sometimes dealers bury drugs in snowbanks and under stones so clients and colleagues can find them later.

The quick, but disturbing exchanges are taking place not only in Ashby, but in similar rural outposts such as Townsend and Ashburnham, where the police departments are too small to keep up with the numerous deals.

“They’re organized and they do their homework,’’ Ashby Detective John Dillon said of the area drug dealers, who police say are usually based in larger nearby cities such as Fitchburg, Lawrence, and Gardner. “If I was going to sell drugs, I wouldn’t do it in front of 100 people. It’s a very isolated area. You could go to certain streets and not see a house for a quarter mile.’’

Tuesday afternoon, on a cul-de-sac of neatly kept homes surrounded by pine trees, the drug dealing was exposed when a state trooper conducting surveillance fatally shot a 21-year-old man he had been watching.

The man, Roger Reyes Padilla, was shot after the trooper cornered him on the closed street and ordered him to stop. The trooper opened fire when Padilla, instead of stopping, drove toward him, State Police have said.

State Police say that the shooting is under investigation, but they have identified Padilla as a Fitchburg drug dealer, who was in a section of Ashby that abuts Willard Brook State Forest, a 2,600-acre park thick with trees that makes it ideal for cross-country skiers, hikers, and drug dealers looking for a quiet area to make their exchanges.

Farther west, dealers have been known to arrange drop-offs in the parking lots and trails near Mount Watatic, a popular hiking area that attracts leaf peepers in the fall, said Ashburnham Detective Robert Siano, who serves on the North Worcester County Drug Task Force, a regional unit of 11 cities and towns in the area.

“They meet in various locations, dead-end roads, state parks, state park parking lots,’’ he said of the dealers. “What they do is, the customer contacts the dealer and the dealer sends a runner or goes himself to meet at certain locations and exchange drugs for money.’’

Using rural outposts makes sense, police say. Drug dealers are subject to wider scrutiny if they deal in bigger cities, where police have a larger presence. Shopping mall parking lots, once convenient spots for drug deals, are more likely to have cameras and higher security. And GPS devices have made it easier to plan out-of-the-way meeting and drop-off spots, said Gardner Lieutenant John Bernard.

“It’s just another way of doing business,’’ he said.

Bernard, a supervisor on the drug task force, said that when the unit busted one dealer a year and a half ago, they found him with more than $7,500 worth of narcotics. He had picked it up from its hiding spot under a rock in Lunenburg, a town of about 10,000 people.

The exchanges are most likely happening between people who know each other well, Bernard said.

Police say addicts and dealers alike are mainly coming from New Hampshire border towns such as Mason and New Ipswich, which are just a few miles away and are drawn to Massachusetts because the drugs are cheap and easily available.

The town, with about 2,400 people, offers dealers in Massachusetts a large supply of customers, many of them addicts in their late teens and 20s, he said.

“Ten years ago, you primarily dealt with marijuana, and occasionally you got someone for cocaine,’’ McTague said. “Now 80 percent of what we do is heroin. It’s amazing. It’s such an epidemic all around. We’re playing the catch-up game.’’

Many Ashby residents are unaware of the drug trade because it is taking place in backwoods and on country roads. The dealers are as likely to arrange meetings during the day as during the night, and their locations often change, police said.

But on Pine Road, where Reyes was shot, some residents said they have seen evidence of the trade, sometimes right in front of their homes.

One woman found several bags of powder near her driveway, neighbors said. A police officer later told her it was heroin.

Al Boyarsky, a 52-year-old plumber, said he and his wife have occasionally seen hypodermic needles strewn along trails during walks near home.

“You go walking along the margins of the road; if you’re paying attention, you’ll see stuff,’’ Boyarsky said.

His neighbor, Mark Kelley, said that during a hike in Willard forest with relatives last summer, he saw a van with tinted windows slowly driving back and forth. When the driver got out, he was holding a small shovel, but upon seeing the family, the man scowled and drove off.

Suspicious, Kelley, a 74-year-old retired meat cutter, called police, who, he said, rushed to the park and later told him the man probably wanted to conceal drugs in the woods.

“I don’t think he was burying the pet canary,’’ Kelley said.

Still, he said, residents were shocked by the shooting, which occurred while many neighbors were at home, watching television and doing laundry.

“Ninety-nine out of a hundred people would want to live here,’’ Kelley said. “You can hear a pin drop at night.’’