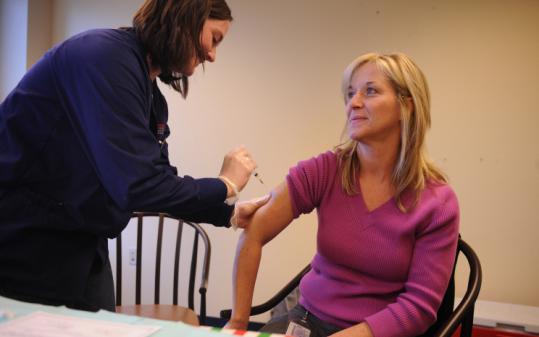 Nurses vaccinated about 80 workers in a Back Bay office building yesterday, as Boston disease trackers moved to contain the potential spread of measles after an employee at the French consulate fell ill this month with the highly infectious germ.

So far, the consulate worker, a woman in her 20s believed by health authorities to be on a short-term internship, is the only person who has developed symptoms of the respiratory illness, said Dr. Anita Barry, the top disease specialist at the Boston Public Health Commission.

But Barry estimates 1,500 to 2,000 workers flock to jobs every day at the ornate Park Square Building on St. James Avenue. And the infected woman had taken the T while contagious and sought treatment at a busy Roxbury community health center.

Barry knows all too well the peril that can be spawned by measles, which can cause life-threatening respiratory and nervous system complications: In 2006, the virus landed at the John Hancock Tower and swiftly spread to restaurants, East Boston, and an office building in the financial district.

“Measles is so contagious that I’m concerned that we’re going to see secondary cases,’’ Barry said.

For children and adults who have already had the recommended two rounds of measles vaccine, there is little reason to worry. The same is true for older adults who acquired natural immunity by being exposed to the disease when it was prevalent.

But the virus remains a very real threat for certain people. Some immigrants and travelers hail from countries where vaccination is not routine. And some parents in this country refuse to have their children inoculated, citing safety fears that most specialists regard as unfounded.

So fliers went up this week at the Park Square Building, home to several consulates, announcing the possible danger and promoting measles vaccinations for anyone who had been in the building from Feb. 7 through 10. A shot will not protect people who are already infected, but the aggressive vaccination campaign acts like water poured on a potential wildfire: Protect enough people from contracting the virus, and it cannot get a foothold.

Nurses arrived at midday and stayed until dusk, offering shots to anyone who had not been vaccinated previously or exposed earlier in life to the virus.

In the hallways of the building, there was an air of concern, although nothing close to alarm.

The principal of a ninth-floor language school called OISE was not worried about his own health; it was that of his staff and students that gave him pause.

“I wasn’t sure if they had been vaccinated, but I found out soon enough that they have and were safe,’’ principal Alain Cabache said.

Pat Kelleher of the Home Care Alliance of Massachusetts said she had been vaccinated as a child. “I think people have to take precautions and should go get vaccinated,’’ the 50-year-old said.

Laboratory tests confirmed the consulate worker’s diagnosis on Friday. The woman, who had not been vaccinated against measles, had classic signs of the disease: cough, runny nose, fever, red and watery eyes, followed in a few days by a signature rash.

Disease detectives then swung into action. They began piecing together who in the French consulate had been vaccinated, who was old enough to have been exposed to the disease when it was widespread in the developed world, prior to 1957, and who lacked any medical records.

That was important because the woman had come to work sick, and measles, carried on a cough or a sneeze, can spread with ease: The US Centers for Disease Control and Prevention estimates that if one person is stricken with measles, 90 percent of unvaccinated people nearby are destined to fall ill.

Nathalie Bastin, press attache in the French consulate, said 17 people work in the office. By yesterday, eight employees had been cleared to come to work, she said.

“People at the French consulate who were vaccinated, we can work without problem,’’ Bastin said.

Other staff members hunkered down at home until they could provide evidence they had protection against the disease or until enough time has passed to ensure they are not infectious.

The management at the Park Square Building, which has about 50 offices on 11 floors, declined to comment.

At the Whittier Street Health Center, where the infected woman sought care while symptomatic, medical workers spent the weekend culling medical records, hunting for patients who were in waiting areas or exam rooms half an hour before the woman’s Feb. 10 appointment and up to two hours afterward. They identified 94 patients or family members who accompanied them and contacted all of them.

Seven of the patients were children younger than 4. “Thank God, they had been vaccinated,’’ said Frederica Williams, president of the Whittier Street Health Center.

Of the remaining patients who might have been exposed, 48 adults are documented to have received the recommended two doses of a vaccine known as MMR, which protects against measles, mumps, and rubella. The remainder are being asked to produce medical records showing they have protection against measles. Otherwise, they will be asked to remain close to home for nearly three weeks.

Now, doctors will wait and watch. The virus can percolate in someone who has been exposed for up to 12 days before symptoms are evident.

Because so many people might have been exposed and have possibly passed the germ on to others, the watch will have to continue for weeks.

For doctors who specialize in infectious diseases, the blanket approach adopted by Boston health authorities is a necessity when it comes to an infection that many Americans regard as a scourge from the past.

“When there is an outbreak of measles, it is very important to try to tackle it and do this type of targeted vaccination,’’ said Dr. Elisa Choi, an infectious disease specialist at Harvard Vanguard Medical Associates.

Globe correspondent Vivian Ho contributed to this report. Stephen Smith can be reached at stsmith@globe.com.