For Brown, second chance was a life-changing moment 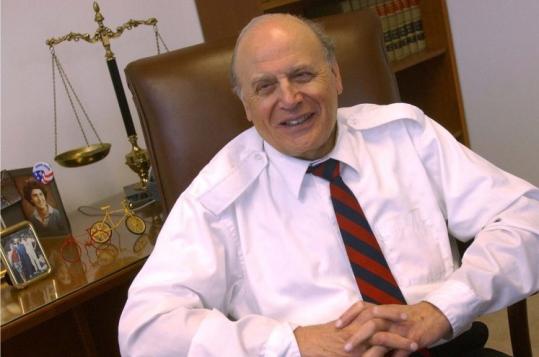 “We had a long talk about talent I thought he had, and I didn’t want to see him squander it.,” said Judge Samuel E. Zoll, recalling a young Scott Brown. (Patricia Mcdonnell/ File 2004)
By Donovan Slack Globe Staff / February 23, 2011

WASHINGTON — It had been decades since Senator Scott Brown was arrested on a shoplifting charge and appeared in Judge Samuel E. Zoll’s chambers in Salem District Court. But when Brown contacted Zoll to thank him for showing compassion to a wrong-headed teenager, the judge remembered him almost right away.

“He called me one day and said, ‘Judge Zoll, this is Scott Brown. You handled a case when I was a young boy, and the way you handled it changed my life,’ ’’ Zoll recalled yesterday in his first public comments about the case.

Zoll, now retired from the bench at 76 and battling gall bladder cancer, said Brown told him he wanted to include his recollections of the case in campaign literature “because that’s how I think a criminal justice system should be run.’’

In the 1974 case, Zoll told Brown to write an essay and warned that he could go to jail if he stole again, a stern admonishment that Brown said has kept him on the right side of the law ever since.

The case, and Zoll’s handling of it, is receiving renewed attention this week as Brown travels the country to promote his memoir, which was released Monday. In the book, “Against All Odds,’’ Brown recounts his experiences in Zoll’s chambers and the effect it had on his life.

It’s unclear exactly how old Brown was when he was arrested. In the book, Brown says it was the summer of 1973, making him 13, but Zoll didn’t take over the Salem court until 1974, when Brown would have been 14. Brown’s office declined to return messages seeking comment yesterday.

Zoll said yesterday that at the time of Brown’s arrest, he had been experimenting with alternative sentencing for juveniles, imposing other punishments besides incarceration.

In one case, after determining that the father of one boy wasn’t spending enough time with him, he ordered the family to eat together every night for a month, and he sent a probation officer to the house every night to make sure they followed his orders. In Brown’s case, he also explored an alternative to juvenile detention.

“We had a long talk about talent I thought he had, and I didn’t want to see him squander it,’’ Zoll said.

Brown writes in his memoir that he was caught outside Liberty Tree Mall in Danvers with “a trunkful’’ of records he had shoplifted. He was summoned to Salem District Court and met with Zoll in his chambers. Brown, wearing a suit he had stolen, tried to look the judge in the eye and be respectful, he wrote. Zoll questioned him about music, sports, studies, family.

“He did something few adults ever seemed to do. He listened,’’ Brown wrote.

The judge ordered Brown to write a 1,500-word essay about disappointing his family. After reviewing it, he told Brown that he was going to give him a break but it would be his last, signaling that if Brown stole anything again, he would be sent to jail.

“He verbally kicked my butt. I believed him,’’ wrote Brown, who also noted that he was inspired to cut off his long hair for good.

Every time he misbehaved or thought of doing so after that, Brown recalls that he thought of Zoll’s words. That long-ago warning had such an impact that many years later, when he was running for the US Senate in 2009, he returned to the cashier of an office supply store to point out that he hadn’t been charged for a stapler.

Zoll said yesterday that he has spoken with Brown periodically over the years since he won a seat in the state House of Representatives in 1998. Zoll went on to serve as chief justice of the state’s district court system from 1976 to 2004.

When he was diagnosed with cancer last year, he became chairman emeritus of the committee, working part time.

He said Brown has called to check on the progress of his treatment, and the senator has dedicated bicycle rides to Zoll. The judge said he is humbled and grateful that Brown remembered him and wrote about the effect the judge had on his life.

“At this stage of one’s life, when you hear stories like this, you get reflective,’’ Zoll said. “Obviously my family and I are very touched by what’s happened.’’