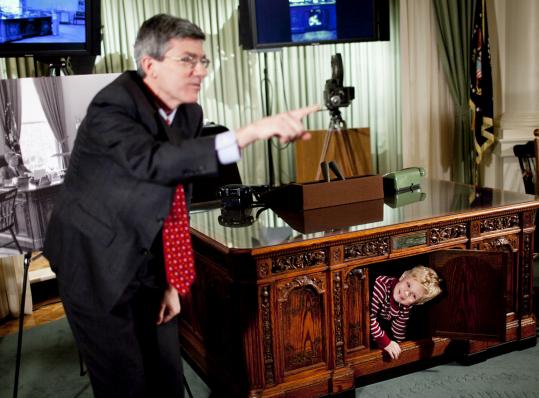 Atop President Kennedy’s desk sat the tools of the trade: a trusted diary, a green phone for critical calls, and a button that secretly recorded discussions on such hot topics such as Vietnam, space, and civil rights.

Now with a click of a mouse, students or history buffs can “sit’’ behind that desk as part of a new interactive program aimed at attracting a younger generation to Kennedy’s legacy in the Oval Office.

The virtual President’s Desk lets online visitors at home, school, or work select seven items on the iconic piece of furniture that link them to newly digital archive materials — including speeches, debates, and campaign commercials — at the John F. Kennedy Library and Museum in Boston.

JFK Library officials, who launched the interactive links yesterday on the museum and library’s home page, said their virtual twist on the president’s desk, called the Resolute desk, will open a window to the myriad issues Kennedy faced in the White House.

“This desk belongs to all the American people and that’s why we have chosen to bring history to life for today’s global audience,’’ said Tom Putnam, the library’s director. “With the launch of the President’s Desk, students will have the opportunity to discover what it means to hold the highest office in our land.’’

Visitors must first go to the library’s home page at www.JFKLibrary.org, and click on the President’s Desk to gain access to the seven illuminated objects — a telephone, picture frame, campaign button, diary, secret taping button, a piece of scrimshaw from Kennedy’s collection, and the coconut husk paperweight containing the rescue message that saved Kennedy and his PT-109 crew.

Users can eavesdrop on Kennedy’s phone conversations, such as the one with his brother Robert in March 1962 discussing congressional hearings into the failed Bay of Pigs Invasion and a poll on the president’s ratings.

They can select the photo album and scan pictures of the Kennedys throughout the years, including one of a 6-year-old Jacqueline Bouvier with the family dog. They can also enter a vault with reels of secret tapes on conversations about a Limited Nuclear Test Ban Treaty.

“What the tapes really do is provide a kind of a ‘you are there’ [experience], an immediate sense of sitting side by side with the president as he discusses pressing issues with top advisers,’’ Nancy McCoy, the library’s director of education programs, explained during a demonstration of the interactive site.

McCoy said the President’s Desk has 1,000 primary sources to tell the online stories, a resource guide for grades 4 through 12, and lesson plans and activities.

Students visiting the museum yesterday seemed willing to give the multimedia effort a try.

“I think it’s really cool,’’ said 13-year-old Emma Franza from New York’s Long Island who had not yet seen the site. “It helps us to fully understand what it was like back then, what he went through, and it really helps to open your eyes to history.’’

“It’s a lot more interesting now,’’ added Sam Manzolillo, 15, also of New York. “It’s not like it’s a video game, but it’s more enticing to go online than to read something that’s on a wall.’’

The desk is steeped in history. It was named after HMS Resolute, a 19th-century British expedition vessel abandoned by its captain in the Arctic in 1852. The ship was discovered in 1855 and returned by the United States as a token of good will to Britain.

Some years later, Queen Victoria had its timbers fashioned into a desk and presented to President Hayes. The desk disappeared for some time, until Jacqueline Kennedy found it in a room at the White House and had it brought to the Oval Office for her husband’s use on Feb. 4, 1961.

The desk contains a secret doorway, captured in a popular photograph of Kennedy working behind the desk while his young son, John Jr., poked out from underneath.

Caroline Kennedy was scheduled to attend an unveiling yesterday, but did not make it because of the weather.