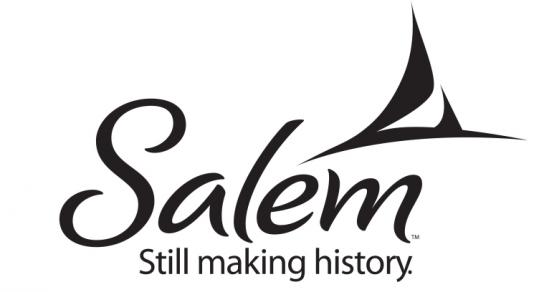 Salem’s new logo depicts two images in one: a pointed witch’s hat and a sailboat, a symbol of the city’s maritime history.
By Peter Schworm Globe Staff / February 20, 2011

SALEM — As a kind of Rubin’s vase, an optical illusion that doubles as two faces in profile, Salem’s new marketing logo is open to interpretation. Some people will probably see the design as a pointy witch hat, befitting Salem’s international image as “Witch City.’’

But others, city officials earnestly hope, will see a sailboat, a symbol of the city’s maritime history and bustling waterfront. Another world entirely from the Salem of witch-kitsch shops and fortune tellers.

“Our problem is not attracting people in October,’’ said Mayor Kim Driscoll, referring to the throngs that arrive each year for Halloween. “People need to know there is so much more here than witches.’’

Salem has long had an uneasy relationship with its witch-trials history, and the glut of businesses built around it, despite the tens of millions in tourism dollars it generates each year. Now, with the new logo and a new slogan — “Still Making History’’ — unveiled at a ceremony last week, the city is trying to move beyond its spooky image in hopes of drawing visitors throughout the year.

“Wherever you go, the witch is first,’’ said Kate Fox, who heads up the city’s marketing group, Destination Salem. “But we’re trying to let people know we have an incredible shop-and-dine scene, too.’’

That might not be as easy as it sounds in a city where scores of businesses rely on the witch theme and don’t want it left behind. City officials said the “hat-boat’’ image not only captured the city’s eclectic nature, it satisfied a variety of competing interest groups that have long jostled for supremacy.

“Rather than fighting over what we want to be, we need to celebrate all of it,’’ Driscoll said. “This doesn’t alienate anyone, or sell ourselves short by just focusing on one aspect.’’

By evoking the city’s maritime and witch-trial past, the new brand cleverly threads a needle, undercutting the city’s stereotype as Halloween central while giving it a nod.

“It just fits,’’ said Rinus Oosthoek, who directs the Salem Chamber of Commerce. “We’ll forever be the witch city, and people have accepted that. It’s part of our identity, and it brings people here from all over the world.’’

It’s known the world over. So well known that when Oosthoek visits his native Netherlands, he doesn’t need to describe Salem. People there know the town and its gruesome history.

Hundreds of thousands of tourists visit Salem each year. In 2009, they spent an estimated $65 million, a huge sum for a modest-sized city.

While more visitors are coming to Salem for the Peabody Essex Museum, historic homes, and nightlife, what some call the “horror industry’’ remains the leading draw.

When the city came up with its previous brand in 2003, they settled on a tall ship against a sunset, which some witch-based businesses took as a slight. Christian Day, who owns two witchcraft shops, Hex and Omen, said the new brand unites many different aspects of the city.

“I love ‘Still making history’ because 319 years later witches are still here,’’ said Day, who describes himself as a practicing warlock. “For me that tagline speaks to what I do, but it also speaks to the hospital, and to Salem State University.’’

Tina Jordan, who directs the Salem Witch Museum, said that despite Salem’s growth in other areas, the seers and souvenir shops remain its bread and butter, and will for the foreseeable future. “You can never step away from the witch aspect of Salem,’’ she said.

Still, for those who complain that the city’s bewitched identity overshadows everything else, the new design raised hopes of a new, broader image. “That kind of pigeonholes us into the October time frame,’’ said Ann Massey, owner of Rouge Cosmetics. “Really there’s so much more.’’