For now, the grandson of RFK is happy to be living away from the spotlight that comes with the name 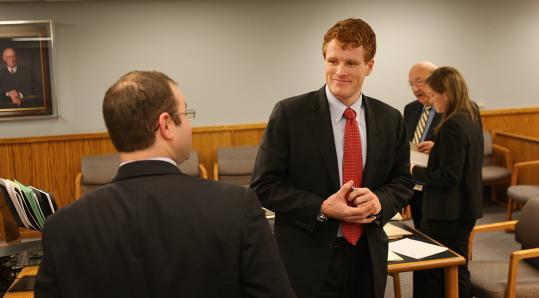 FALMOUTH — An assistant district attorney on Cape Cod, he spends his days in a windowless courtroom as busy as a bus station, scrambling from one gritty, small-town drama to the next. The cases he tries usually don’t make the papers, and if it wasn’t for his name, he wouldn’t either.

But his name is Joseph P. Kennedy III. So when the 30-year-old grandson of Robert F. Kennedy traveled to the State House last month to make a speech — rushing north to Beacon Hill after a morning in court — it earned him a standing ovation, and sparked a wave of speculation about his political aims.

The Kennedy era in politics may be over. But as long as there are tall, well-spoken young Kennedys in Massachusetts, they will be seen as likely candidates.

Raised in Marshfield, Brighton, and Cambridge, the son of former Massachusetts congressman Joseph Kennedy II, this young Kennedy has an impressive resume, but it is unquestionably the resume of a 30-year-old. A former Peace Corps volunteer and a graduate of Stanford University and Harvard Law School, now a year and a half into his first job as a lawyer, he insists he is sticking with his current line of work. But in an interview, he also left the door open to politics.

“Down the line, who knows?’’ he said in a brief phone call during a break from court. “[Politics] is in my family, and it’s definitely interesting, but at this point, I’m focused on my job. It’s fun and fast-paced, and you never quite know what’s going to happen . . . I love coming to work every morning.’’

The buzz about his future isn’t likely to go away. Born into a family that looms large in American history, his is a complicated inheritance: the advantages that go with the Kennedy name; the condemnation of those who loathe his family’s liberal tradition; and the inevitable expectations of those who won’t be satisfied until he runs for office.

Those expectations have sharpened since the death of his great uncle, Senator Edward M. Kennedy, and the decision of his cousin Patrick Kennedy to bow out of politics — developments that ended a period of almost 50 years during which the family had a member serving in Congress.

Considered their best hope for a comeback, Joseph Kennedy III may seem young. But by Kennedy standards, he is old enough: John F. Kennedy was 29 when first elected to Congress; Ted Kennedy was 30.

He was approached by Democrats a year ago, after rumors surfaced that Representative William Delahunt would retire from Congress. He told the Globe then that he considered running, but decided “I’ve already got a great job.’’

The eagerness to anoint the next generation of Kennedys is inevitable or inexcusable, depending on who you ask.

“What are they going to run him for, president?’’ asked Christen Varley, president of the Greater Boston Tea Party. “To ordain someone as suitable for public office based on bloodlines is just ridiculous. I would assume the majority of us, on both sides, are beyond that.’’

“I feel bad in some ways for the youngest Kennedys, because they have so many people expecting them to run,’’ said Johnston, who has known Joe and his twin brother Matt since they were children.

But sympathies aside, Johnston found it hard to contain his enthusiasm for the young Kennedy in question (“What’s not to like? He’s like Jack’’) and said he expects him to mount a campaign (“If I were betting, I’d bet that he will, at some point’’).

Kennedy’s own cousin, Patrick, offered his opinion recently, on CNN, that Joe has “the perfect profile’’ for elected office.

Given the crush of interest in his plans, perhaps it’s not surprising that he likes going to work, in a compact Falmouth courtroom far from Beacon Hill and Washington, D.C.

In court on a recent snowy day, Kennedy spent most of his time on his feet, addressing the judge, retrieving witnesses and conferring with other attorneys. Sitting at a table between cases, he tipped back his chair. Arguing against a defense motion, he talked fast, as if to make his point before the judge lost interest.

After a brief bench trial that resulted in a $120 fine, Judge Michael C. Creedon called Kennedy up to the bench for a private chat in which he seemed to offer a few pointers.

It isn’t the first time Kennedy has learned on his feet. At Harvard Law School, which he graduated from in 2009, he volunteered dozens of hours a week to represent the tenants of foreclosed properties, even taking one case to federal court.

Nick Hartigan, a classmate who worked with him on the case, said he didn’t realize his friend was one of the Kennedys until a mutual friend filled him in. Later, he said, the two of them attended a mediation session in a room with a picture of Robert F. Kennedy on the wall, “and the mediator said to Joe, ‘Has anyone ever told you you look like Robert F. Kennedy?’ And he said, ‘No, not really’ . . . He is the most normal of normal people.’’

Joe Kennedy II said his son is good-hearted and caring, an irresistible Pied Piper. “You can’t describe what he’s actually like, because no one would believe it,’’ he said. “He’s like a throwback to another time.’’

Kennedy drives a Ford Escape Hybrid, speaks fluent Spanish, and bears an uncanny resemblance to Conan O’Brien. He tends to end his sentences by asking, “right?’’ His resume includes his co-chairmanship of his uncle Ted’s reelection campaign in 2006, but he points to his time in the Peace Corps as particularly formative. During two years in the Dominican Republic, he helped a group of local tour guides improve access to a series of waterfalls, and strike a deal with the government to give them a stake in a new national park.

Kennedy’s mother, Sheila Rauch Kennedy, says he is committed to the principle of fairness, so much so that “I worry a little about him, because life isn’t always that way.’’ Raising her boys, she said she tried to stress “the value of having your own work,’’ an identity apart from the family name. Joe’s twin brother, Matt, works in Washington, as special assistant to Deputy Treasury Secretary Neal Wolin.

Certainly they are used to public scrutiny. Their parents divorced amicably in 1991, but when their father sought an annulment, their mother fought it — all the way to the Vatican — and wrote a book about the experience. In 1997, in the midst of the media storm that followed, Joe Kennedy II abandoned his campaign for governor.

Speaking last month at the State House, he had to follow his great-uncle, JFK, whose famous “City Upon a Hill’’ speech had just echoed through the chamber. Legislators then turned to the tall, red-haired young man at the podium, standing where the historic speech had been delivered.

In a forceful take on the divisive political climate, Kennedy condemned “partisan rancor’’ and connected the recent shooting spree in Tucson to the assassinations of JFK and his grandfather. Afterward, Senate President Therese Murray called it “another historic speech.’’

Asked how he will know if it’s time to run, Kennedy said he would consult with his family and listen to his gut.

“You just know, when the issues are ones you want to get involved in, and you feel you could contribute to the debate and the direction of the country, right?’’ he said. “If you don’t have that passion, you should hold off.’’