Camp, DA reach out to Brown on abuse

But senator says he’s not inclined to pursue case 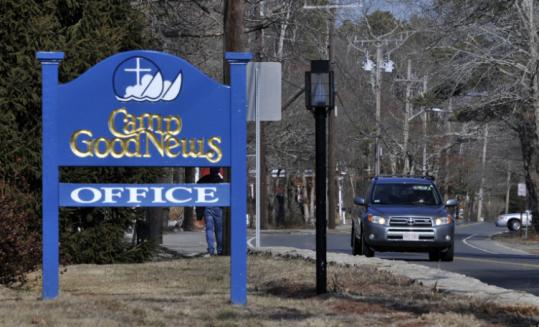 The Cape Cod Times reported that officials at Camp Good News in Forestdale have acknowledged that Scott Brown attended the camp when he was a boy. (Steve Heaslip/Cape Cod Times)
By Shelley Murphy, John R. Ellement and Brian R. Ballou Globe Staff / February 19, 2011

Law enforcement officials and operators of a Sandwich religious camp yesterday said they would help Senator Scott Brown if he wanted to pursue possible criminal charges against a summer camp counselor who he said sexually assaulted him four decades ago.

But in a statement released last night the Republican US senator from Massachusetts suggested that he is not likely to push for a criminal investigation.

“I wish I had said something 40 years ago when these events occurred, but I was scared and embarrassed.’’ Brown said. “I want to be clear that the reason I write about these incidents in my book is not to settle any scores, but to let people know they can overcome the obstacles and hardships they face in life.’’

He added, “If by opening up about what happened to me I’ve given others the courage to talk about their own abuse, or just comforted someone who felt alone, then I feel I’ve accomplished something important.’’

Cape and Islands District Attorney Michael O’Keefe said he spoke to Brown last night and the senator told him he was not interested in pursuing his attacker. O’Keefe said he contacted Brown based on disclosures in his new autobiography that he was molested at a Cape Cod camp when he was 10.

In a telephone interview last night, O’Keefe said, “There are many people like the senator who don’t want to pursue it further than the cathartic experience of revealing it. He has assured me that that’s the way he feels.’’

O’Keefe said Brown has not identified his attacker or the camp and that he respects Brown’s wishes and will not launch an investigation.

O’Keefe acknowledged that successfully prosecuting someone for a crime that allegedly occurred around 1970 would be difficult, if not impossible. Massachusetts has a 15-year statute of limitations on sexual assault charges. However if the abuser left the state within that time, the clock would stop for that period, making charges possible.

Brown’s book, “Against All Odds,’’ is scheduled for release on Monday.

Although Brown has not identified the camp, operators of Camp Good News, a nondenominational Christian camp in Sandwich, confirmed yesterday, as initially reported by the Cape Cod Times, that Brown attended the camp. They said they were devastated by the possibility that he may have been molested there.

Dr. Stephen Brooks — a surgeon at Cape Cod Hospital and vice president of the nonprofit Society for Christian Activities, which operates the camp — said he left a message for Brown yesterday, but had not spoken to the senator and did not know the identity of the counselor.

“Not only did I call him, but we have sent him a letter of apology and heartfelt sadness for what’s going on,’’ said Brooks, whose grandfather, a US Navy chaplain and World War II hero, founded the camp in 1935. “It just makes me sick.’’

Brooks said that the camp may still have records indicating who was on staff when Brown was there, but that it did not make sense for him to go through them without knowing the identity of the abuser.

“If Scott Brown were to say, ‘I want to get that guy,’ I would support him in that,’’ Brooks said. “I’m going to support Scott Brown because he’s had the courage to do what he’s done.’

Brooks said he was unaware of any allegations of molestation at the camp when Brown was there until the senator came forward.

The camp, which is attended by more than 300 children each summer, sent a letter to parents yesterday, assuring them that numerous safeguards were taken to protect their children.

“Our camp is committed to the physical and emotional safety of our campers, past, present, and future,’’ the letter says. “Forty years ago when Senator Brown was a camper, there was far less awareness and greater stigmatization around abuse, which kept many children suffering silently into their adulthoods.’’

The camp, which is accredited by the American Camp Association, conducts criminal and sexual background checks on all staff members and provides intensive staff training, according to the letter. Counselors are not allowed to be alone with a camper at any time, the letter says.

In August 2008, the Society for Christian Activities paid $20,000 to settle a civil suit filed in Barnstable District Court by the parents of a 13-year-old girl from Switzerland, who accused a counselor of inappropriate conduct while she was at the camp in 2007.

“My daughter returned from Camp Good News in a very different state than she was in when she departed for Camp Good news,’’ the girl’s mother wrote in a court affidavit. She said her daughter was unhappy and depressed and confided to a psychiatrist that she had an “inappropriate relationship’’ with a male camp counselor.

The settlement, which was mainly to cover the girl’s medical bills, included a stipulation that the counselor would never work at the camp again.

The counselor’s father told the Globe last night that his son was falsely accused by the girl, who had a crush on him and made advances toward him. He said his son was prepared to defend himself at trial, but the camp decided to settle the case.

Brooks said the family never sought any criminal charges against the counselor.

O’Keefe said his office was not aware of the allegations made in the 2008 suit, but should have been notified.

“It’s something that we will be looking into, just to assure ourselves that there aren’t any problems,’’ he said.

O’Keefe said his office has no record of prosecuting anyone associated with the camp for at least two decades.

A spokeswoman for the state Department of Children and Families, which handles allegations of abuse of children, said the agency has no record of any problems related to Camp Good News in Sandwich. David Mason, director of public health for the town of Sandwich, said the town has not had any complaints regarding Camp Good News, which he said appears to be well-run.

Brooks said he was aware of only one report of sexually inappropriate behavior at the camp, which was made in the late 1980s.

He said parents called to report that their children revealed they had been fondled by a camp staff member 10 years earlier. He said it was too late to pursue charges against the former staff member, but he notified his current employer.

Brooks said that staff member was not working at the camp when Brown was there.