Digging deep to keep roofs over their heads

In handful of communities, a third of income spent for shelter 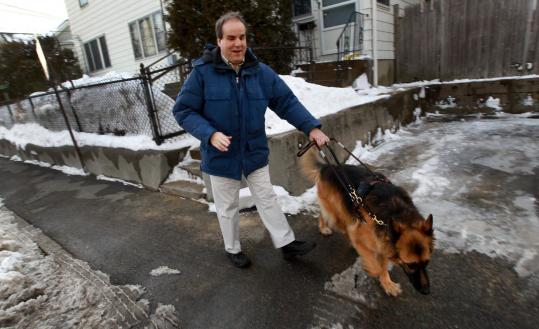 Bob Hachey of Waltham with his guide dog, Xane. Hachey, who is currently unemployed, says he has given up hope of ever owning his own home. (Barry Chin/Globe Staff)
By Lisa Kocian and Matt Carroll Globe Staff / February 17, 2011

Bob Hachey struggles to pay the rent on his basement apartment every month, but in Waltham, where he has lived for 25 years, that has become the norm.

Almost half of Waltham renters have been spending more than 30 percent of their income on rent, according to data from a regional planning agency.

Researchers used the 30 percent figure because, according to federal housing officials, a household that pays that level or above may have difficulty affording life’s other necessities. The Metropolitan Area Planning Council culled US Census housing data from 2005 through 2009 for Massachusetts cities and towns.

Among the western suburbs Waltham fared the worst, with 44 percent of all homeowners and renters spending more than 30 percent of their income on housing. For renters alone, the news was worse: 49 percent spent above the federal threshold. Thirty-nine percent of homeowners spent beyond their means.

For homeowners, the calculations included mortgage payments, insurance, taxes, and utilities, among other items. For renters, it included rent and utilities.

Overall, the relatively wealthy western suburbs compared favorably with the rest of the state. Of all Massachusetts households, 40 percent were overpaying for housing over the same five-year period, according to MAPC estimates, which included 35 percent of homeowners and 50 percent of renters statewide.

In this area, only three other communities exceeded the 40 percent statewide average. In Shirley, Millis, and Framingham, 42 percent of combined renters and homeowners paid beyond the federal threshold.

Hachey, 49, said he has given up on the American dream of homeownership. Three years ago, Hachey, who is blind, lost his full-time job. Although he said he had some part-time work for a while after that, he has been completely unemployed for about a year and is now living on disability benefits.

More than 30 percent of that income goes to rent and utilities, said Hachey, but he doesn’t think he could qualify for a Section 8 voucher or Housing Authority property.

Hachey lives with his girlfriend, who works at a day-care center. He refers to her as his wife and says the two can’t afford to get married because it would affect his benefits.

“I’m sick of telling my wife we have to do without,’’ he said.

But even if he could qualify for housing help, he might have a hard time getting it.

There is a five-year wait for a Section 8 voucher in Waltham, according to Walter McGuire, executive director of the Waltham Housing Authority. The vouchers, part of the federal government’s primary program to help low-income people with housing, subsidize a qualifying person’s rent up to a certain cap. Usually, the vouchers are portable so they can go with a resident who relocates to another housing development or municipality.

There’s also a long wait for one of the 805 units run by the Housing Authority — at least a year for a resident who is elderly or disabled, about three years for a family, and longer if the person does not live or work in Waltham, McGuire said. (Barrier-free apartments for those who have impaired mobility are sometimes available sooner but that list is more unpredictable, he said.)

So, with such long wait lists in mind, what would McGuire advise a friend who was struggling to pay their rent?

“Move someplace else,’’ he said.

Although housing prices have come down in the last couple of years, so have incomes.

“The housing burden remains very substantial. We shouldn’t think that because housing prices have cooled people are paying less for housing, because that is not the case,’’ said Mark Draisen, executive director of the Metropolitan Area Planning Council.

If someone with a housing problem contacts the South Middlesex Opportunity Council in Framingham, they might get counseling on how to deal with landlords, make a budget, and evaluate their housing needs, said Charles Gagnon, chief operating officer for the council, which provides a wide range of services for low-income residents.

The council’s Housing Services Center might also refer them for legal assistance if they are facing eviction, said Gagnon, and homeowners can take advantage of other services such as foreclosure prevention.

Demand for these kinds of services has been on the rise, said Gagnon.

“I think the sheer numbers are up because of the recession,’’ he said. “We haven’t seen the rebound.’’

The towns at the opposite end of the list from Waltham and Framingham are wealthier towns, where home prices might be high but so are incomes. Boylston, Harvard, and Sherborn had the best numbers in the western suburbs, with only 21 percent, 24 percent, and 25 percent, respectively, of those towns’ populations spending 30 percent or more of their incomes on housing.

Spending more than 30 percent of income on housing has consequences not only for a family but also for the broader economy, according to Erica Schwarz, executive director of the Waltham-based WATCH Community Development Corporation.

They often live in overcrowded or otherwise poor conditions, which in turn affects a child’s ability to do well in school, said Schwarz.

Although the cost of buying a home has come down a bit in Waltham, she said, it was starting out so high that even the lower prices are out of reach. Likewise, rents have not come down much, said Schwarz, and with the added burden of lost jobs or reduced hours, people are feeling overwhelmed.

“We definitely see a lot of people who are just so stressed,’’ she said.