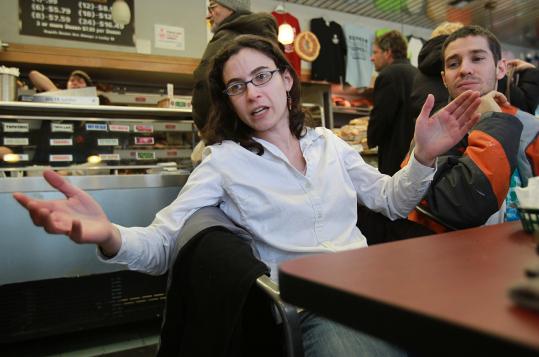 Molly Zeff and Andrew Kessel, during lunch yesterday at Kupel’s Bakery in Brookline, discussed relations between Israel and Egypt. “I have a personal interest in the peace,’’ said Zeff, who has family in Israel. (Suzanne Kreiter/Globe Staff)
By Michele Richinick Globe Correspondent / February 14, 2011

BROOKLINE — Zev Steinmetz, 29, has traveled to Israel every five years since he was a child. Yesterday, he said the promise by Egypt’s new military rulers to maintain its peace treaty with Israel was encouraging.

“It’s clear [the Egyptians] want to create a democracy,’’ said Steinmetz, a Brookline resident, while eating lunch at Rami’s in Coolidge Corner. “I don’t think there’s any reason not to believe [Egypt’s assurance] at this point. . . .The majority of people in Israel are supportive of Egyptian democracy. People in Israel are very happy about this as well.’’

On Saturday, Egypt’s first day in nearly 30 years without Hosni Mubarak as president, its new military rulers reassured the world that the country will abide by its peace deal with Israel.

Jewish people around Boston yesterday echoed Steinmetz’s belief and said they are hopeful relations between Egypt and Israel will go forward on a positive note.

“Initially I was scared that sooner or later [Egypt] would scrap the treaty,’’ said Ben Betzalel of Newton, who is originally from Israel. But “as much as the treaty is good for Israel, it’s good for [the Egyptians] as well. In the short-term, I don’t fear anything.’’

The military underlined Egypt’s “commitment to all its international treaties,’’ in its statement Saturday pledging to honor the 1979 peace treaty.

Israel has been deeply concerned that Egypt’s turmoil could threaten the peace accord. On Saturday, Prime Minister Benjamin Netanyahu of Israel welcomed the military’s statement, saying the treaty “has greatly contributed to both countries and is the cornerstone for peace and stability in the entire Middle East.’’

The implementation of democracy and progressive values in the Arab world benefits everyone in the Middle East, but specifically gives a boost to the cause of peace between Israel and Egypt, said Jeffrey Robbins, cochairman of the Combined Jewish Philanthropies’ Israel Advocacy Committee.

“That isn’t to say that there aren’t going to be bumps in the road, and maybe some very problematic bumps,’’ Robbins said in a phone interview.

“I think the better view is that where freedom of expression, openness of ideas, and the protection of the rights of women, gays, and lesbians flourish in a Middle East, which is newly attuned to democratic values, that serves the cause of peace. It makes it likelier that understandings can be reached that have not been reachable in the past.’’

For the moment, the commitment on the part of those in charge of Egypt to abide by the peace treaty is a promising sign, Robbins said.

“You can never rule anything out,’’ said Rami Khouri, a visiting scholar at the Fares Center for Eastern Mediterranean Studies at Tufts University, in a phone interview. But “I don’t think there is any evidence for Egypt or Israel going back to war. I would expect the Egyptians to maintain the peace treaty and the Israelis to maintain it. . . . [Though] I think you’re going to see a more critical Egyptian government . . . while maintaining a peace treaty.’’

But people around the world should join in celebration with the Egyptians now and “enjoy the moment,’’ said Khouri, who teaches at the American University of Beirut but is at Tufts for a month.

“I was absolutely not surprised. There was never any doubt about’’ the support for the treaty, he said.

“I think it is a really important lesson to not jump to conclusions and not act on the basis of assumptions and say, ‘Oh, well, the Muslim Brotherhood will take over, and it will be bad for Israel.’ ’’

Andrew Kessel of Cambridge, 25, said the future leadership in Egypt will be integral to the continuation of the peace treaty.

“I think Israel must be nervous,’’ he said yesterday at Kupel’s Bakery in Brookline. “I might be less nervous myself because it’s different being a Jew here than in Israel. Certainly in Israel they must always be on their guard. We don’t know what will happen. Time will tell.’’

Sentiment yesterday favored the continued involvement of the United States in relations between Israel and Egypt. Egypt receives more than a billion dollars annually in US aid. Rabbi Allan Lehmann, vice president of the Massachusetts Board of Rabbis, said he hopes the United States will continue to work toward maintaining a peaceful border between Egypt and Israel.

“It would seem to be in the strong interest both of Egypt and of Israel to build on over 30 years of a peace treaty,’’ Lehmann said in a phone interview. “I think we’re in a very important and delicate time of change where we bring together hopes and concerns.’’

The issue of relations between the two countries hits home for Molly Zeff of St. Louis, 26, who has family living in Israel.

“My personal fear is based on my sister and her family in Israel,’’ Zeff said, while she ate lunch with friends yesterday at Kupel’s Bakery. “I have a personal interest in the peace.’’

Anti-Israeli feeling is strong in Egypt, and many of the hundreds of thousands of protesters expressed anger over the past weeks at Mubarak’s close cooperation with Israel on a range of issues. Still, few who were interviewed in Boston seriously call for the abrogation of the treaty, realizing the international impact.

“I hope it works, and I do have concerns of democracy and anti-Israel sentiment,’’ said Richard Lang of West Roxbury, 56. “It’s so unsettled now, it’s hard to count on anything.’’