Darkness reigns along swath of Turnpike 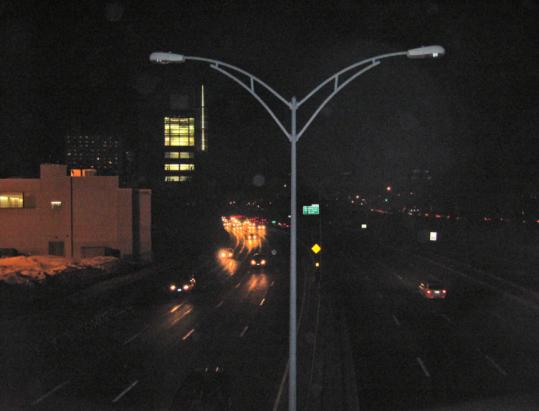 Reader Debra Poaster asked if GlobeWatch can “shed any light’’ on what appears to be a growing problem along the Massachusetts Turnpike.

“For years there has been a dispute over who is responsible for the street lights on the bridges over the turnpike on Cambridge Street in Allston near the river and also closer to Harvard Avenue — the city of Boston or the turnpike,’’ Poaster wrote in an e-mail.

“Neither has taken responsibility and now there are NO LIGHTS at all on the bridge nearest the river and few on the other bridge. So from dusk to dawn it is a no man’s (woman’s) land for pedestrians and bikers. Anyone coming off the bike path on the river or going food shopping from that part of Allston to the Cambridge side is out of luck.’’

GlobeWatch first wrote about lights out on the turnpike in February 2008, when a Globe reporter tallied 76 darkened lights, from the Interstate 93 interchange and the entrance to the Turnpike extension tunnel by South Station west to the Beacon Street overpass near Fenway Park.

At the time, a Mass. Pike spokesman said a major electrical circuit board was to be replaced as part of the Columbus Center construction project in the South End, so the turnpike was temporarily holding off on permanent fixes to the broken highway lights. The spokesman said the authority didn’t feel the lack of light posed any safety hazard to drivers and anticipated the bulbs would be glowing again “within a matter of months.’’

But that never happened, and after years of controversy over shaky finances, the developers of the Columbus Center formally shut down their operations in March.

On a recent trip, a Globe reporter found largely the same darkened lights as in 2008, plus more than four dozen additional lights out, from the St. Mary’s Street overpass to the Allston/Brighton toll plaza. Lights on the Everett Street overpass in Brighton by the shopping center, which Poaster writes about, were also dark.

The state responds The Massachusetts Department of Transportation, which now oversees the upkeep of the Turnpike, will address the lighting problem in the near future, according to spokesman Adam Hurtubise. This summer, MassDOT will undertake lighting repairs as part of a $9.7 million paving and median barrier replacement project to the highway east of the Prudential tunnel.

That work is scheduled to be completed in November, he said. The light outage west of the Prudential tunnel is a result of failed conduit and wiring and will be permanently addressed as part of several other longer-term projects, including the Parcel 7 parking garage over the turnpike in the Fenway area and the reconstruction of the Boston University viaduct.

In the meantime, Hurtubise said, an interim fix will be made by MassDOT workers to install temporary conduit and conductors to lights from the Prudential tunnel west to the Allston/Brighton tolls. That should be complete this fall.