As their numbers rise, some urban coyotes take missteps

1 killed, another freed in region 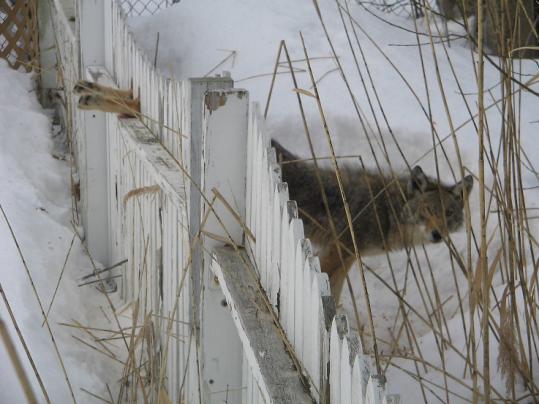 State authorities shot and killed a coyote in Dorchester and rescued another caught in a fence in Salem this weekend, as the region continues to grapple with a thriving population of the animal.

The incidents followed a spate of local coyote sightings in recent weeks. On Feb. 1, the Animal Rescue League of Boston pulled a coyote from the Charles River after it fell through the ice. In late January, a coyote was shot and killed by Massachusetts Environmental Police on Beacon Hill after police found the animal to be suffering from a painful skin condition and said it could have presented a threat to public safety. Numerous coyote sightings have been reported recently in Nahant.

On Friday, environmental police were called to a house on Grampian Way near Savin Hill Park in Dorchester after receiving reports that a coyote was apparently living under a porch, said Sergeant James Hennessey.

Officers were able to scare the animal off, but neighbors called authorities again on Saturday, after they saw the coyote return to the porch. The coyote appeared to have a injured hind leg, Hennessey said, and possibly had the skin disease mange, a condition marked by rawness from heavy scratching.

For several hours, Hennessey and three other environmental police officers tried to dislodge the animal by scaring it away, a process known as “hazing,’’ Hennessey said.

“We try to do a lot of things before we use lethal force,’’ Hennessey said. “We move it, we scare it, we haze it.

“It moved away from humans, but it was not afraid to take up residence in the house. We decided we had to put it down.’’

Hennessey said he shot and killed the coyote with his service weapon.

Catherine Williams, a spokeswoman for the Executive Office of Energy and Environmental Affairs, which oversees the environmental police, said officers were justified in killing the animal.

“Typically when wildlife are in an urban area, officers try to encourage the animal to leave, and also assess the behavior of the animal and determine if there’s a public safety issue,’’ Williams said. “Because the animal was injured and officers had been unsuccessful in removing the animal the day before, they decided to kill the coyote.’’

In Salem, authorities were called early Saturday to a home on Station Road, where a coyote had become ensnared in a fence. John Spofford, a Peabody firefighter and emergency medical technician who has experience with animal rescue, said he saw the coyote’s two hind paws wedged between the top points of a picket fence, with the animal standing on her front paws on the other side.

Spofford said it appeared the coyote had tried to jump over the fence and caught her hind legs on the top of it. After examining the animal for signs of other injury, Spofford knocked out the top of the pickets that were restraining her paws, freeing the coyote.

“She gave me a bark, a little howl, and started to drag herself away,’’ Spofford said. He said he was worried that the coyote’s hind legs were seriously injured, but the animal appeared to walk normally as she made her way into nearby woods.

Hennessey said mid-February is the height of coyote mating season in Massachusetts, and may explain the many recent sightings as the animals are moving around, trying to establish territories and find mates.

Coyotes become a problem when they start to use civilization as a food source, he said. He encouraged people to close off crawl spaces, secure their trash, and to feed pets indoors and not leave them outside unattended.

Coyotes “are truly an adaptable animal,’’ Hennessey said. “Not just in rural or suburban areas, but also in urban environments.’’