Assembly Square station gets go-ahead, lifting hopes for redevelopment of site into a riverfront complex 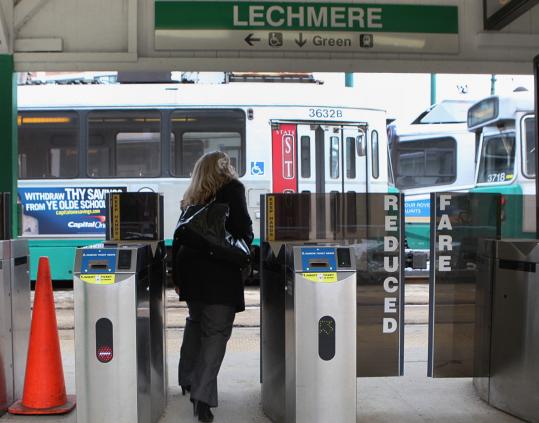 The MBTA plans to extend the Green Line beyond its current terminus at the Lechmere stop into Somerville. (Wendy Maeda/Globe Staff)
By Eric Moskowitz Globe Staff / February 13, 2011

The Orange Line is on its way to getting a 20th station, without getting longer. The MBTA board last week approved an agreement with developer that will enable construction of a station at Somerville’s Assembly Square, roughly halfway between existing stops at Sullivan Square in Charlestown and Wellington in Medford.

The agreement gives the state the real estate rights to build the station and entrances and realign track. The project is expected to cost $53.7 million, with the T hoping to advertise for construction bids this spring and complete it within three years.

The station is seen as a key selling point in the redevelopment of the windswept Assembly Square — named for a long-ago factory — into a riverfront complex on the Mystic with 2,100 residential units, 1.75 million square feet of office space, and 1 million square feet of movie and retail space. (That includes a proposed IKEA; how to get that Kivik sofa home on the T is another matter.)

The developer is putting in $15 million. Representative Michael Capuano, Democrat of Somerville, previously secured authorization for $25 million in federal funds for the stop, but Congress has released only $1 million and appears in no hurry to earmark the rest.

To keep that from stalling the project, the state Department of Transportation and the Boston Region Metropolitan Planning Organization are redirecting federal highway funds, and the Executive Office of Housing and Economic Development — seeing the potential for thousands of construction and long-term jobs — is kicking in infrastructure money, said Joe Cosgrove, the MBTA’s director of development.

The board unanimously approved the agreement, but board member Elizabeth Levin wanted to make sure taxpayers are not left on the hook in the event of a replay of East Cambridge’s North Point, where a development mired in legal disputes meant the state had to step in and assume responsibility for a new Lechmere station, needed for the Green Line extension.

No problem this time, MBTA General Manager Richard A. Davey said. “Until it’s in escrow, we will not be going out to bid,’’ he said.

The T estimates that 4,800 to 5,400 riders will board daily at the new stop, including 1,400 to 2,000 who would otherwise have driven a car. Moreover, officials see it as a make-or-break component for the development. The city is not directly involved in the subway-stop agreement but recently approved a $25 million district tax-financing plan to keep the development moving forward.

“Assembly Square is probably the only smart growth project that is under construction right now on the East Coast,’’ Mayor Joseph A. Curtatone said. “It’s the model of public and private cooperation.’’

MBTA approves $22m for Green Line extension, crosses fingers for US fundingThe MBTA’s board last week approved the biggest single expenditure yet for the proposed Green Line extension to Somerville and Medford. But what might have been a celebratory moment for project supporters was tempered by anxiety over where the rest of the money for the billion-dollar project might come from.

The MBTA sought $95 million over five years to hire an engineering and construction management team to advance the design of seven stations, the track layout, and a vehicle maintenance facility, and to oversee construction.

Instead, the board voted to spend $22 million to hire a team — a partnership of Gilbane Building Co. and engineering firm HDR Inc. — to do only the design work and to help the T prepare the application it plans to submit to the federal government at the end of this year to seek 50 percent reimbursement for the roughly $1 billion transit extension.

Directors said there is no reason to commit to the rest of the contract without knowing if that federal New Starts application will be successful.

“I hate to be the spoiler at the party here, because everybody loves this project. I love this project, too,’’ board member Ferdinand Alvaro Jr. said. “But I guess I have a question as to how we’re going to pay for it. . . . We’re already being crushed by the debt that we have.’’

The extension of the Green Line beyond the Lechmere terminus in Cambridge has been on the drawing board for generations. It was officially added to the books two decades ago as part of the public transportation improvements the state pledged in order to get permission to build the Big Dig and to comply with the federal Clean Air Act.

So the state is on the hook to pay for the Green Line extension whether or not it wins federal funding, Secretary of Transportation Jeffrey B. Mullan told the board. And given the changes to Congress after the last election, transit dollars might not be in ample supply when the state comes calling.

“I’m nervous about that,’’ Mullan admitted.

Delaying the Green Line will make it more expensive, he said. And the state is legally required to pay for mitigation — such as running more buses in Somerville and making them cleaner-burning — if it misses the Dec. 31, 2014, Green Line completion deadline, which it has already said it could miss by 10 months or more.

Four years ago the state hired the engineering firm Vanasse Hangen Brustlin to handle environmental review and conceptual design at $2.8 million. That contract had already been amended four times, for an additional $9 million, when state planners returned to the MBTA/Department of Transportation board last summer, seeking an additional $24.5 million.

At the time, that proposal drew controversy because VHB had been working with Parsons Brinckerhoff — of Big Dig infamy — as a subcontractor. And the MBTA board was concerned over how a $2.8 million contract had grown to a $36 million package without going back out to bid. Mullan and others said that the contract had not been re-bid because of the need for urgency on the Green Line and the quality of VHB’s work to date.

The new work, put out to bid, now goes to Gilbane-HDR at a modest price reduction, albeit five months later. No one brought up VHB or Parsons last week, but board member Elizabeth Levin did hint at the past controversy. “Is there anyone missing in the group that we should know?’’ she asked FrankDePaola, the MBTA’s assistant general manager for design and construction.

Just one subcontractor, he said: S E A Consultants Inc., a Cambridge firm that has previously worked with the T.

Addressing the board before the debate, Somerville’s mayor, Joseph A. Curtatone, called the proposal “a historic moment’’ for New England’s most densely populated city — once a bastion of rail and streetcar stops but now home to one subway stop (Davis Square) and no commuter rail stations. “We finally have the opportunity to repaint the canvas of our community,’’ he said.

Later, he said the amount approved was less important than the approval itself. “It’s the best transportation project on the drawing board, and it’s going to happen,’’ he said.