In Brookline, push is on for skate park

Boarders — and their backers — want some space of their own 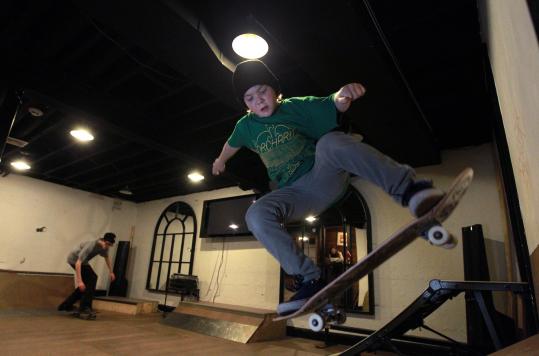 Myles Underwood, shown riding with Daniel Crane (left) in his family’s basement. and his mother, Patty, are lobbying for a skate park in Brookline. (Barry Chin/Globe Staff)
By Brock Parker Globe Correspondent / February 10, 2011

Other than dodging cars, 11-year-old Myles Underwood says, one of the biggest challenges to riding skateboards in Brookline is that people tend to run him off from outside local schools and other spots along urban streets.

“Getting kicked out is hard,’’ Myles said, adding that there are not many places to skate, “except like going to a park a half-hour or an hour away.’’

In an effort to provide Myles with a local option, his parents recently built a miniature skate park featuring a quarter-pipe ramp in the basement of their home. But they aren’t stopping there.

The Underwoods and other local skateboard enthusiasts are leading another charge to build a skate park in Brookline. In a change from previous unsuccessful attempts, they are also proposing the creation of “skate spots’’ and “skate dots’’ that would provide several small venues in existing parks.

Other area communities, including Arlington, Lexington, and Watertown, have skate parks. But in Brookline, according to Patty Underwood, there isn’t a single spot for skaters, even though the town has plenty of facilities for baseball and soccer players.

“It’s important for me to have my son feel like skating is a valued and accepted recreational activity,’’ she said.

The push for a skate park led at least 60 people to crowd into a recent Park and Recreation Commission meeting in support of the idea, Underwood said. Town officials have set up a subcommittee to explore the issue.

Erin Gallentine, the town’s parks and open space director, said the subcommittee will look into whether Brookline could create an area for skateboarding. Patty Underwood, her son, and a couple of teenagers will join several park commissioners on the subcommittee, which was slated to meet this week after the weather postponed an earlier session.

“This is a great opportunity for him to see what it’s like to advocate for what you want,’’ Underwood said of Myles.

In the past dozen years other efforts to build a skate park in Brookline have run into opposition from neighbors worried about noise, Gallentine said.

The most recent proposal was about four years ago, she said, when the town explored building a skate park at North Brookline’s Lawton Playground, less than a half mile from Packard’s Corner in Boston.

“Neighbors definitely felt it was just too close to the neighborhood,’’ Gallentine said.

But she also said it’s “loud and clear’’ that there is still a group interested in a skate park in Brookline.

She said the proposal to explore the creation of skate spots and skate dots is a new concept to her, and could have less impact on surrounding neighborhoods.

Armin Bachman, co-owner of the Orchard Skateshop in Allston, said a skate dot is a single object, such as a granite bench or sculpture, set up for skateboarders in a park with other recreational uses. A skate spot might have two to five features that could be used by a small group.

Bachman, still an avid boarder at age 30, said the skate spots and dots would be much smaller than the Reservation Road Skate Park in Hyde Park, for example.

“The reality is you do not need that much space,’’ he said.

Bachman said the concept of skate dots is new to the Northeast, but cities such as Portland, Ore., and Seattle have them.

He said skateboard enthusiasts would like the town to also build a skate park covering about 5,000 square feet, and said his store, on Harvard Avenue near Allston’s border with Brookline, has some ideas about how to raise money to pay for it.

While fear of noise may prevent some neighbors from wanting a skate park nearby, Bachman said, using the proper materials, such as concrete, would limit the sound to the decibel level of a flushing toilet.

Underwood said the idea is to have several locations of various sizes throughout town, and she wants to work with the neighborhoods and officials to see that it can be done.

The subcommittee is just beginning its work in exploring options for skateboarding parks. Gallentine said if it develops a proposal, the town would need to do a feasibility study to explore the cost.

“I hope there is some way we can make this group feel welcome,’’ Gallentine said.

Brock Parker can be e-mailed at brock.globe@gmail.com 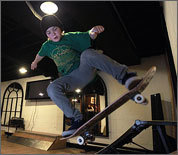