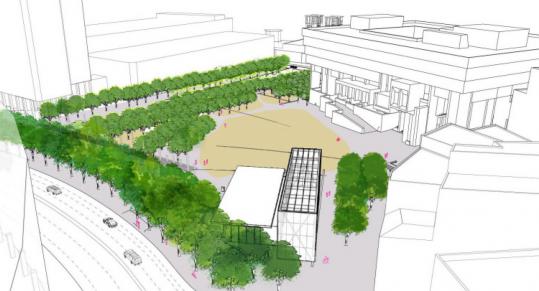 Both of the proposals to update City Hall Plaza would add rows of trees and a clearer path to the entrance of City Hall. (Utile Inc. And Reed Hilderbrand Associates)
By Jeremy C. Fox Globe Correspondent / February 9, 2011

Imagine a City Hall Plaza with lush green trees and ample shade, a place where downtown office workers could enjoy their lunches in the fresh air, where college students and weary tourists could pick a shady spot to read, and children could play hide and seek.

That vision could become a reality, and today’s empty, red-brick expanse just a memory if a local design team gets its wish.

The leafy scenario was aired earlier this week during a symposium on ways to make Government Center more inviting — and green. The Environmental Protection Agency selected Boston and four other cities last fall to participate in the Greening America’s Capitals program, which provides seed funding to begin designing more environmentally friendly neighborhoods in state capitals.

Architect Tim Love presented the ideas that were generated during three days of brainstorming sessions in December. Love, a founder and principal at Utile, Inc. Architecture + Planning, emphasized that it was still very early in the planning.

“These aren’t projects yet,’’ he said at the gathering at Suffolk University’s Modern Theatre. “They’re not proposals. They’re proto-schemes.’’

The two ideas discussed Monday would add trees and change the slope of the 20-foot drop between the Cambridge Street side of the plaza and the side along Congress Street.

Both would add flat land and a clearer path to the entrance of City Hall from the Washington Street mall south of the building, and both would expand existing rows of trees on the north side of the plaza, adjacent to the JFK federal building, and add a row of trees hugging the curve of Cambridge Street.

The first plan would split the large open space on the north and west sides of City Hall into two smaller spaces, while the second would create several smaller spaces and open a pedestrian and bicycle path as a continuation of Hanover Street across the plaza to Cambridge Street.

“I admire the restraint of these proposals, and that may not sound like a pretty big compliment, but actually I intend it to be a compliment,’’ said panelist Alex Krieger, founding principal of Chan Krieger Sieniewicz.

Almost since its completion, there have been calls to change the vast, open space of City Hall Plaza, built during 1960s urban-renewal on part of the site of the demolished Scollay Square, a raucous district of burlesque theaters, tattoo parlors, rooming houses, and taverns popular with sailors docked at the waterfront.

Intended as a public square similar to the Piazza del Campo in Siena, Italy, the plaza never drew the kind of crowds its designers hoped for, and in the 1970s much of the foot traffic it did attract was lost to the revitalized Faneuil Hall Marketplace.

Successive mayors have tried — and failed — to improve the area with grand plans: European-style gardens, drive-in movies, and restaurants. Among pitches from Mayor Thomas M. Menino, who supports revamping the plaza: a 150-foot-tall wind turbine.

Ted Landsmark, president of the Boston Architectural College, cautioned that the planners should put themselves in the shoes of the average person. “The reality is that most of the folks who we would want to capture in these spaces would neither look nor sound like most of us,’’ Landsmark said.

The project team plans to issue a final report on its recommendations by mid-March, at which time a third public symposium will be held.

Jeremy C. Fox can be reached at Jeremycfox@gmail.com