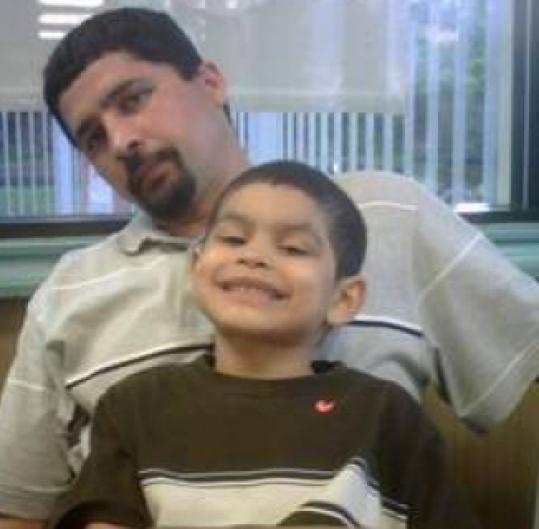 PATILLAS, Puerto Rico — She emerges in a flowered housecoat from her fenced-in house, in a remote corner of this Caribbean island where roosters and horses run wild. For two years, relatives have begged her to return to Massachusetts to visit her son in jail, to persuade him to solve the mystery of the missing grandson she never knew.

But Lydia Gonzalez will not budge.

“He’s a grown man,’’ she said in Spanish, in her first interview since her son, Ernesto, was accused in the August 2008 disappearance of his then 5-year-old son, Giovanni.

“He doesn’t need his mother to tell the truth.’’

Gonzalez, a petite, gray-haired former factory worker who raised Ernesto and his sister in Massachusetts, is a powerful and distant figure in her son’s troubled life. She has not spoken to him for years, despite his repeated attempts to contact her, but some believe that she is crucial to solving a case that is mired in uncertainty.

Three months after the boy vanished, Ernesto Gonzalez confessed in a jailhouse interview with the Globe that he became upset while his son was misbehaving during a weekend visit to his apartment in Lynn, and stabbed the boy to death. He said he then dismembered his small body and dumped the remains in trash bins. Investigators have since found the boy’s blood in Gonzalez’s apartment, but the significance of that evidence is unclear. The boy’s body has not been found.

Gonzalez, a 38-year-old former meatpacker, is charged only with parental kidnapping and misleading investigators. He has pleaded not guilty, and is being held in Essex County jail. Last week, his lawyer said in Essex Superior Court in Salem that he would seek to have one of the charges against Gonzalez dismissed at a hearing on March 30.

Giovanni’s mother, Daisy Colon, who separated from Gonzalez two years after Giovanni was born and lives in Boston, said she believes that her son is still alive, and possibly in Puerto Rico, where she and Gonzalez were born and have relatives. She fears that his confession halted the search too soon.

After her son disappeared, she journeyed to the seaside towns of Patillas and Arroyo, in southeastern Puerto Rico, to beg his relatives to help her, especially his mother.

“His mother has a very important role here,’’ Colon said last week. “Maybe what he’s looking for is a way to talk to his mother. And maybe through her he can unburden himself and talk. He is always asking for her. She is the key.’’

Sitting on her front porch late last month, Lydia Gonzalez said she nearly came to Massachusetts, but changed her mind because she did not trust the relatives who wanted to bring her. She said she loved Ernesto and was estranged from him because he fell into drugs in Puerto Rico and fled to Massachusetts under threat of a drug gang.

As she spoke, she clasped her hands in her lap, wept, and expressed her devotion to her church.

“I would tell Ernesto to confess, no matter the circumstances, if he did it, or not, so that it takes the weight off him,’’ said Gonzalez, 60. “If my son is guilty, then he should pay. If he’s innocent, then he should speak.’’

Other associates of Ernesto’s in Puerto Rico said they were shaken by Giovanni’s disappearance — and tired of speculation that the boy might be hidden on the island.

One of Ernesto Gonzalez’s former girlfriends, with whom he fathered an older son, now 18, said she was stunned when investigators showed up at her door in Arroyo after Giovanni disappeared. The woman, who spoke on condition of anonymity, said Gonzalez had sent her thousands of dollars in child support months before Giovanni disappeared. But she said she had never seen Giovanni, and she welcomed a reporter, who arrived unannounced, into her home.

Her son, a college student, said he was so upset about Giovanni’s disappearance that he could hardly get out of bed to face his classmates at school. He has since sought solace in counseling and his church.

Gonzalez’s older sister, Lydia Santiago Gonzalez, who also lives in Arroyo, said people stared at her in the supermarket when her brother’s picture appeared in the newspaper. She said she has not seen the boy, either.

In August, the National Center for Missing & Exploited Children in Virginia issued a photograph of Giovanni altered to depict what he might look like today, at age 7. The poster said he could still be in Massachusetts, or that he may have traveled to Puerto Rico.

Relatives in Puerto Rico said they do not believe that Gonzalez was capable of murder. They said he had a troubled childhood, fell into drugs in Puerto Rico, and had turbulent relationships with women in Puerto Rico and in Massachusetts. He had four children with different women, they said.

He had a criminal record in Massachusetts. In 2001, he was convicted of assault and battery and other charges in a domestic violence incident.

But they said he was also kind, protective of his family, and tender toward his children.

In Arroyo, the former girl-friend said she sent her son to visit Gonzalez in Massachusetts six years ago and that the boy returned beaming about a trip to Six Flags amusement park.

His sister, Lydia, who moved to Puerto Rico at age 18, lived apart from her brother for many years. But she said he stayed in touch through letters and appeared hopeful in the years before Giovanni disappeared.

In one letter, sent in 2006, he wrote that he hadn’t used drugs for 10 years and hoped to study. Sometimes he would slip prayer cards into the envelopes.

Almost always, he asked about their mother.

“Everything’s Mom, Mom, Mom, always about Mom,’’ said his sister, who also said she rarely sees her mother, even though she lives nearby. “And Mom doesn’t go. I sometimes think if my mom goes, maybe he will say something.’’

His mother said she would visit her son one day, “when I am ready.’’ She said her son is “not a saint,’’ but she does not believe that he killed Giovanni.