Stretching to fit a growing flock

Instead of expanding in Lexington, one of the area’s few megachurches plans a satellite branch 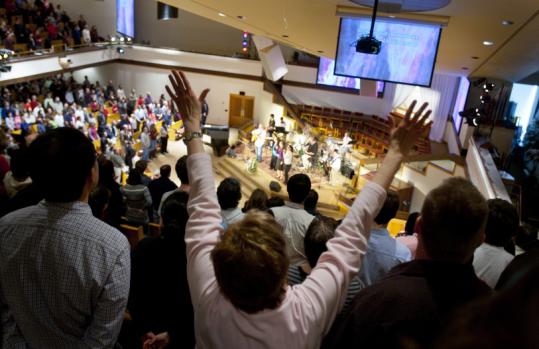 Grace Chapel in Lexington, one of the few evangelical megachurches in the Boston area, will open a new campus in Wilmington this spring that will share Grace’s name, senior leadership, and even sermons, which will be broadcast from Lexington most Sundays.

The move represents a decision by Grace’s leaders to adopt an approach to growth that is common among megachurches nationwide, but still relatively rare in New England. Rather than prepare for yet another expansion project to accommodate its ever-growing congregation, which numbers close to 4,000 most Sundays, Grace plans to add branches in various Boston-area communities over time.

“It finally occurred to us — instead of trying to squeeze more people into the Lexington campus, why don’t we take church to where the people are?’’ said Grace Chapel’s senior pastor, Bryan Wilkerson.

The Wilmington site — which will open in the former Casa di Fior function hall on Easter Sunday — will have a strong local focus, with its own pastor, youth group, and community service initiatives, as well as singing and prayer during worship services. But the new campus will be overseen by Grace’s board of elders and receive assistance from its staff, and the congregation will watch the weekly sermon on a large high-definition screen in the new sanctuary.

Thomas J. Colatosti, chairman of Grace’s board of elders, said the church could establish as many as a half-dozen offshoots over the next decade.

“We see the spirit moving there in powerful ways,’’ he said.

The “multisite’’ model has become increasingly common over the past 10 years among US megachurches, defined as congregations with more than 2,000 members. The Rev. Warren Bird, coauthor of “A Multi-Site Church Roadtrip: Exploring the New Normal,’’ said that of the 10 most highly attended churches in the United States, nine have multiple campuses. (The one that doesn’t, he said, is Joel Osteen’s Lakewood Church in Houston, whose sanctuary, the former home of the , seats 16,000.)

New England has few megachurches compared with other regions of the country, and the multisite approach to church growth — let alone piped-in preaching — remains a foreign concept to many, though there are signs it is beginning to take root here as well.

Dennis P. , president of Gordon-Conwell Theological Seminary in South Hamilton, said going multisite makes sense for some congregations, but not others.

“The advantage of this approach is extending the influence of a highly gifted preacher and a church with significant resources,’’ he said in an e-mail. “The disadvantage is that some parishioners feel that it is too impersonal, and feels too much like a TV program.’’

Ralph Kee, a Baptist minister who has planted churches in Boston for 40 years, said he wondered whether it would be difficult for a pastor to spiritually reach large crowds in multiple sites.

“Jesus always spoke to the situation at hand,’’ he said. “I wonder if, in Protestant circles, we need to revisit the notion of the parish church. And maybe they would say that’s exactly what they are doing.’’

Some of Grace’s members were skeptical at first, including Joyce DeSanctis, 53, who lives in Danvers and has attended Grace for about seven years. But she said she changed her mind when she learned that in Wilmington, which is nearer her house, she would still get to hear Wilkerson preach on Sundays. For her, the medium isn’t a negative — she listens to his sermons on the Internet when she misses church.

“It hits me the same just hearing him, whether it’s on my computer, or whether I’m sitting across from him,’’ she said. “When he speaks, he is speaking to me, to my daughter, to the retired person five rows back. He applies the message of the Bible to everyone in the congregation.’’

Grace, which began in 1948 with a number of Lexington families meeting in private homes, is theologically evangelical in its focus on the “good news’’ in the Gospels, but Wilkerson describes it as “free from some of the social and political entanglements’’ that he feels that label sometimes carries. A welcoming atmosphere, he said, is one of the reasons it’s growing so fast.

In addition to worship services, Grace has a cafe, a “Kidstown’’ for children, a gym, and an art gallery, as well as a constellation of classes, retreats, and service groups. To cultivate a more intimate feel, many meet in small groups outside of church.

Accommodating so many people is a perennial challenge. The church built a 75,000-square-foot addition just five years ago, but as its board of elders began looking down the road, members wondered how they could continue growing without the expense of building a new sanctuary, said Colatosti.

“We wanted to do something that was sustainable and scalable,’’ he said.

The church had previously “planted’’ two new independent churches; each time, it was a struggle to gain a critical mass of members, and to reinvent basics like the governing structure or the Sunday school curriculum, Wilkerson said.

With a multisite model, Wilkerson said, “you start with the strength of a large church behind you, a proven model, an identity that’s already recognized.’’

And Grace already has some experience in videocasting sermons — on Sundays, worshippers can attend a more casual service in a large room near the main sanctuary; they watch the sermon on a screen as it’s being preached across the hall.

The branch congregation will have a small staff, but it can rely on the expertise of Grace’s 40 employees in Lexington to handle complex matters like finances. Tom VanAntwerp, a longtime associate pastor at Grace who will be the pastor of the Wilmington campus, will preach about once a month, as he does now, but he won’t have the responsibility of writing a sermon every week, leaving him more time for other aspects of ministry.

VanAntwerp sees the multisite model as a natural fit for a “town-centric’’ region like New England.

“To go from Wilmington or Reading or Lynnfield all the way to Lexington to go to church — you can do that once a week, but you can’t extend and invest more deeply in the relationships,’’ he said. “This gives people an opportunity to be close to the church, and be more deeply involved.’’

Two hundred adults have already committed to worshipping and serving in Wilmington.

Corri Ogburn, 41, of Reading, has been a member of Grace since shortly after she and her family moved to the area in 2004. She and her husband have agreed to head up outreach at the Wilmington campus, or as she puts it, to find “creative and surprising ways to serve the community, with no strings attached.’’

She hopes her neighbors will find their way to Grace now that it’s closer, even though she understands that a broadcast sermon might seem “kind of lame’’ to some at first.

“Bryan’s a great pastor, and we want to keep that unity, but a sermon is just one small part of church,’’ she said. “That might be a different concept for people, but I think that it’s not just about, go to church on Sunday, listen and check the box — ‘I went to church.’ It’s going to be about gathering together, loving the community we’re in, and being together.’’