Something new on the menu

Some in the North End want to make Hanover Street one way and give it a bit of Newbury Street panache. But others fear losing the bustle that makes this savory place. 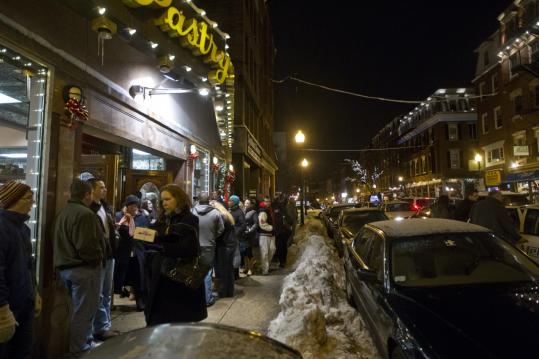 Hanover Street in the North End draws massive crowds, as it did on a recent Saturday evening in January. (Matthew J. Lee/Globe Staff)
By Meghan E. Irons Globe Staff / February 5, 2011

Even with glacial piles of snow and an icy wind on a recent day, Hanover Street’s narrow sidewalks seethed with people, and impatient drivers slalomed double-parked delivery trucks amid the helter-skelter traffic that has come to define the fabled spine of Boston’s North End.

Some say the cacophony and gritty edge are essential to Hanover’s Old World charm, but business leaders along one of Boston’s biggest tourist draws say it is time to do something about it.

Saying the removal of the elevated highway has brought more people and cars to the neighborhood than ever, they are proposing that the street be converted to one-way traffic and its sidewalks widened to accommodate alfresco dining and more comfortable strolling. They want to spruce up the street with more trees and gaslight lampposts with an eye to making over the street in the image of the Back Bay’s Newbury Street.

“We are getting more people than Faneuil Hall, Chinatown, Newbury Street,’’ said Frank De Pasquale, head of the North End Chamber of Commerce, which is pushing the plan. “Hanover is a premier street, just like Newbury Street, and we’d like it to be treated the same way.’’

City Hall, where officials have fretted about the traffic crunch on Hanover, is open to the idea. But it is generating intense controversy in the North End, where many residents fiercely guard what they say is the lifeblood of the neighborhood.

“Hanover Street is no way similar to Newbury Street, and that’s actually one of its strong points,’’ said Mary McGee, a 37-year resident and member of the North End/Waterfront Residents’ Association. “Here you see your neighbors. It’s a real-people kind of experience, not a glamour kind of experience.’’

Less than a mile long and at the northern tip of the Rose Fitzgerald Kennedy Greenway, Hanover is one of the North End’s original streets. Besides its famous trattorias and restaurants, its mix of life is the stuff of travel guides. In summer, older men sit on sidewalk benches taking in the street life or head to the Prado to play cards. Amid sightseeing tourists, normal life goes on at the local fire station, the community health center, and the local corner markets.

Some tourism officials say that flavor of Hanover Street — a gem with all its blemishes — could be lost if Hanover is made over.

“It’s part of the soul of the street,’’ said Pat Moscaritolo, who heads the Greater Boston Convention and Visitors’ Bureau.

Still, many say that Hanover is badly in need of updating, and proposals for revamps have come up repeatedly at neighborhood meetings in recent years. In 2006, City Councilor Salvatore LaMattina circulated an idea to close Hanover to cars and make it a pedestrian mall, with strolling violinists, artist stalls, and waiters serving Valpolicella and espresso to customers at tables in the street. But residents shot the idea down, and it never got off the ground.

“You walk around the North End and it’s jammed-packed with tourists,’’ said LaMattina, who wants an independent traffic study of the street. “I do think we should take a serious look at it before someone gets hurt.’’

Officials in the Boston Transportation Department, which would be responsible for any makeover of the street, said they have not seen the plans but said they would consider the proposal if there were enough community support.

“We would be willing to take a look at it,’’ said Jim Mansfield, the department’s director of community outreach.

In the small, densely packed neighborhood, some resistance is fueled by longstanding tensions between residents and businesses looking to attract more customers. They point to a steady string of merchants seeking to expand their restaurants to serve more people or to serve liquor later into the night.

David Kubiak, who heads the zoning committee for the residents’ association, has yet to see a formal plan but worries that a one-way Hanover would invite more people into the street later into the night, contributing to noise and vandalism.

“We’ve reached a capacity to handle all the nighttime activity,’’ said Kubiak. “We can’t allow traffic to grow anymore. Hanover Street can’t handle it and the neighborhood can’t handle it.’’

“They are trying to do away with the ambiance of the North End,’’ said 80-year-old Frank Romano, as he stocked supplies at a North End senior center one afternoon. “And that’s because it’s all about the businesses.’’

Nicole Rafter, who lives in the North End, said her neighbors are also concerned that their Little Italy will follow the path of similar neighborhoods in San Francisco and New York City that are now shadows of themselves.

“These were two wonderful, old Italian neighborhoods that allowed themselves to become highly commercialized, and now they are dead,’’ Rafter said. “It’s not good for business to have too much business in an area that is residential and has wonderful old traditions as the North End does.’’

De Pasquale, who owns six North End restaurants and describes himself on his website as a powerhouse restaurateur, seemed taken aback by the early resistance, saying he’s trying to do what is best for the neighborhood.

Not everyone is against the one-way plan. On Hanover Street one evening, some residents said they yearn for any improvement that will ease the chaos.

“I think it’s a great idea,’’ said Anna Martignetti, a lifelong North Ender. “It’s insane here. In the summer you can’t even walk.’’

And some businesses owners who had initially been skeptical said they are warming to the idea.

“I think it would be a good idea to try it,’’ said Alan Caparella, who owns Mother Anna’s Restaurant at Cross and Hanover.

Harry Shuris, the co-owner Philip’s Salon, said a one-way Hanover would not do much for his business, but he would like to see the chamber’s final plan.

“It wouldn’t hurt,’’ he said. “I think Hanover Street overall should have some sense of order.’’