By train or car, the cruelest month 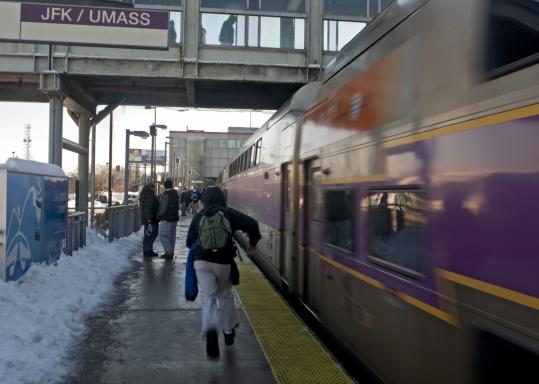 The MBTA’s commuter rail in January had its worst month in three years, with 27 percent of trains running behind schedule, leaving riders throughout the region waiting in uncertainty on frigid and snowy station platforms and causing some with other options to abandon the rail.

As lawmakers and state officials field waves of complaints, transportation leaders have called a meeting with the management and board of the Massachusetts Bay Commuter Railroad, the contractor that collects more than $250 million a year to run trains that, on a good day, move 65,000 commuters between Boston and its suburbs.

“We’re failing our customers badly, and we’ve got to do better,’’ state Secretary of Transportation Jeffrey B. Mullan said in an interview yesterday. Mullan said that, at the Feb. 15 meeting with the commuter rail, state officials plan “to talk about our disappointment in their performance, to demand better service, and to hold them accountable.’’

Commuter anger over the thousands of delayed trains last month was compounded by inconsistent or inaccurate service alerts and announcements. Dozens of trains ran more than a half-hour behind schedule or were canceled altogether, and many of the delays came at peak commuting times, making workers late to their jobs.

“It has been so frequent lately that it seems to be more the norm than the exception,’’ said David Mello, a lawyer from Concord who pays for a monthly pass on the Fitchburg line, but yesterday gave up and drove instead to the nearest Red Line stop. “You start to wonder whether it makes sense to just avoid the commuter rail altogether.’’

At North Station yesterday, many passengers expressed displeasure over both the commuter rail’s ability to run trains on time and to notify the public when they are delayed.

“It’s miserable,’’ said Nancy Murphy, a Belmont resident who rides the Fitchburg line to her job at a law firm, and who said the text-message alerts she signed up for have been nearly as unreliable as the trains.

And Sheila Marian of Winchester said the commuter rail has done a poor job of explaining the frequent delays. “You get off and you say, ‘Is this the only way to run a railroad?’ ’’ said Marian, who rides the Lowell line to her job as an administrative assistant at MIT.

Hugh Kiley, general manager of the commuter rail, said the railroad has been hamstrung by the inclement weather and the age of the MBTA-owned fleet. But he said the company can and should do better, and has already taken steps to improve.

Kiley said the commuter rail plans to devote more attention to maintaining equipment and doing so in a smarter fashion, discussing best practices with other railroads that operate in cold climates to learn new techniques. He said some other railroads, for example, use special wraps to insulate the cables that power the heat and lights for coaches — which sometimes fail even when trains are running on time — and sprays to make exposed mechanical and electrical equipment more resistant to moisture.

Kiley said his company has put more than 53,000 hours of labor this winter into clearing snow from track and platform walkways and waiting areas, as well as railroad switches, which can fail from packed snow every time a new train passes through.

But he conceded that the railroad has been unable to keep up with the worst of winter. Starting with the next major storm, he said, the commuter rail will run fewer trains during inclement weather, hoping that it can meet a reduced schedule in a more reliable fashion. The storm schedule, developed with the T, will allow more time for equipment to be maintained between runs and keep more backups ready in the event of failure, he said.

“The more wrench time, the higher the reliability,’’ he said.

“Customers are forgiving when we have delays, but they’re not forgiving — nor, frankly, should they be — if we’re not able to communicate in a timely manner that there is a delay, and why,’’ he said.

Davey, who was named general manager of the T last March after serving a similar role at the commuter rail, said he has a unique perspective on the relationship between the public transportation authority and the private company, which he described as a partnership. But he said T and state officials have been disappointed with the commuter rail’s performance this winter, and that the struggles could help the state design a better contract to replace the current one.

The contract — an initial five-year deal that has been extended twice and expires in mid-2013 — is explicit about track maintenance, with the expectation that the commuter rail replace 41,000 crossties and 10 miles of rail each year, Davey said; as a result, there are comparatively few failures because of track problems. But the contract is less detailed about locomotive and coach maintenance, Davey said.

“I think when we put this contract back out to bid we’re going to be more clear, more specific, about what’s required of the contractor when it comes to maintenance,’’ Davey said. “Having sat on both sides of this now for eight years, I know in some instances [the contract] is vague, is susceptible to interpretation and, frankly, debate, and that really doesn’t solve the problem.’’

The Newburyport/Rockport Line was the worst performer in the system last month, with just 58.9 percent of trains running on time. State Representative John D. Keenan of Salem said some who once considered the commuter rail a prized asset for the community are now driving to Boston instead.

“The weather is really getting to everybody, and standing outside in the freezing cold or the snow makes five minutes feel like 15 minutes and 15 minutes feel like an hour, so that makes it even more difficult,’’ said Keenan, who has called for the T to improve communication.

Many of the T’s 80 commuter rail locomotives and 400-plus coaches date to the 1980s or earlier and are nearing or have exceeded their 25-year useful life. Some upgrades are on the way, with 75 coaches and 20 locomotives on order at a combined cost of more than $300 million, but the first pieces of equipment will not arrive for more than a year.

In the meantime, the commuter rail must perform better with the fleet it has, said Mullan, the state’s top transportation official. “I can’t very well urge people to ride on the commuter rail or take the subway if it doesn’t operate,’’ he said. “We need to do better and I’m disappointed that we’re not.’’

Travis Andersen of the Globe staff contributed to this report. Eric Moskowitz can be reached at emoskowitz@globe.com.