Snake on a train, bashful for weeks, slips out, is snared 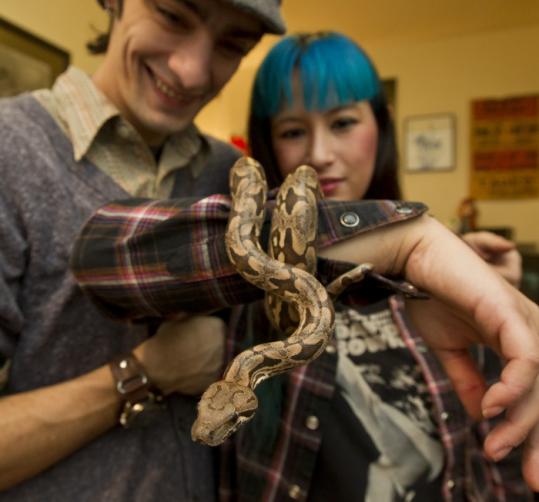 Melissa Moorhouse and husband, Ray, with their boa, Penelope, last night after the pet was found on the T. (Matthew J. Lee/Globe Staff)
By Neal J. Riley Globe Correspondent / February 4, 2011

Penelope the pet snake’s long journey on the MBTA came to a happy end yesterday.

The Dumeril’s boa had slithered away from its owner, Melissa Moorhouse of Allston, while she was riding on the Red Line nearly a month ago. Moorhouse said she first noticed the snake missing as she headed outbound on the Red Line in the late morning of Jan. 6.

MBTA employees helped her look in the subway car in which she was riding at the JFK/UMass station, where they held the train for a few minutes, and performed a more exhaustive search at the Braintree terminus, walking through each of the six train cars and looking under the seats, with no luck.

But at 10 yesterday morning, a Red Line passenger spotted a snake and alerted a motorman, MBTA Transit Police Lieutenant Daniel Fitzgerald said last night. The train was taken out of service, but it was not until 8:30 p.m. that Red Line train attendant Sharon Lynch, a snake owner herself, got Penelope into a box at the JFK/UMass station.

“You can’t make this stuff up,’’ Fitzgerald said.

Moorhouse, 30, was thrilled that the MBTA had finally found her precious Penelope.

“I’m overwhelmed,’’ she said just before being reunited with the pet last night. “I’m extremely happy to have her back.’’

Moorhouse said she lost her nonvenomous pet, which is just under 3 feet long, somewhere between the Broadway and Andrew stations.

“I checked for her at Andrew and she was gone,’’ she said.

The car the snake was found in yesterday was part of the six-car set where Penelope got lost, Joe Pesaturo, a spokesman for the Massachusetts Bay Transportation Authority, said last night.

Moorhouse said the boa could hide in even the smallest of spaces and find food if she needed it.

“What I’ve been trying to tell people is that she would survive, she would be in the train whether it was weeks or months,’’ she said. “I don’t know if they have mice or rats but she is completely capable of eating them.’’

MBTA policy allows riders to bring nonservice pets on the T during off-peak hours. Dogs must be well-behaved and properly leashed, while small domestic animals must be carried in lap-size containers and out of the way of exits.

In August, T officials held a Green Line trolley for a short time in Brookline after passengers reported that they felt uncomfortable because of a fellow passenger who was carrying a snake around his neck. When police responded to the Brookline Village station, the man and the snake had already exited.

Despite her pet’s ordeal, Moorhouse, who had been carrying Penelope around her neck and under a scarf when she escaped, said she still plans to travel with Penelope on public transportation in the future.

Moorhouse will turn 31 later this month, and is elated that Penelope can celebrate with her.

“This is the most wonderful birthday present ever,’’ she said.

Eric Moskowitz of the Globe staff contributed to this report. Neal Riley can be reached at nriley@globe.com.