Welcome to the average Massachusetts town

Statistically speaking, Townsend the most typical 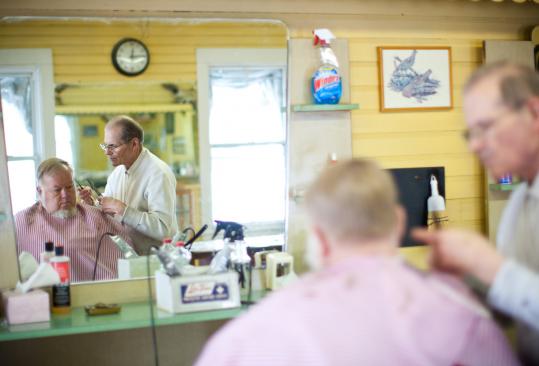 TOWNSEND — It is sturdily middle-class and middle-aged. Once a mill town, it is resolutely run-of-the-mill, a generic, gracious New England community of solid schools and modest homes. It’s surrounded by forest and has one McDonald’s and two Dunkin’ Donuts.

But this nondescript bedroom community turns out to have a singular distinction: It’s the state’s most statistically typical town.

An informal analysis of new US Census Bureau figures that allow town-by-town comparisons for the first time in a decade shows Townsend’s estimated population of 9,687 is just off the statewide median of 10,336. Its median family income, around $86,000, almost exactly matches the typical community’s, as does its median age of 39. Home values and education levels also fall in the fat part of the curve.

“Everything about the town is super-average,’’ said Aaron Silvestri, a 26-year-old who grew up here. “That’s how people like it.’’

An hour and change from Boston, Townsend stands at a crossroads of small-town life and suburban bustle, and it even feels like middle ground between the two. It has few sidewalks and a bevy of farm stands and antique shops. But the Interstate 495 beltway is just a few towns away, and residents routinely drive into Boston for dinner or games.

“Not too close to the city, but not too far out,’’ said Peter Lareau, who owns Pete’s Barber Shop just off the church-lined town green, which features a classic bandstand. “Right in the middle.’’

Lareau, who has lived most of his 71 years in town, said newcomers are drawn by affordable housing, the relative proximity to jobs in Worcester, Manchester, N.H., and northeast Massachusetts, and a quaint, everytown quality.

Still, like many residents, Lareau bristles a bit at his town being considered anything average.

“I would say a little better than average myself,’’ he said politely, as he put the finishing touches on another $6 haircut.

Next door at Cliff’s Cafe, waitress Christine Place was also quick to defend her town as a close-knit place where people are happy with the way things are. To her, average doesn’t do it justice.

But for others, news of Townsend’s place in the middle had the ring of truth and drew weary sighs.

“That’s depressing,’’ said Robert Young, 46, the co-owner of a downtown computer repair shop. “But I guess it is just a sleepy little town.’’

Kauppi noted that Townsend once thrived as a barrel-making hub.

More than 70 percent of Townsend residents were born in Massachusetts, according to census estimates, compared with 63 percent statewide. Some 96 percent of its residents are white, compared with the community median of 94 percent. Because the town is set back from major highways, commutes are a few minutes longer than average. Compared with the state as a whole, more people own homes and have children.

Many people were surprised to learn that what feels like a small, out-of-the-way place would in fact be typical.

Townsend clearly has a laid-back, congenial feel. Drivers yield to pedestrians, even jaywalkers, and beep hello at people they know. The regulars at Cliff’s contribute to a fund so a homeless man with a drinking problem can eat for free.

“Half our clientele comes every day, usually twice,’’ said Dave Pacaro, who owns Cliff’s. “They love their routines. They sit in the same seat, order the same thing. Read the paper twice.’’

Darlene Sodano, who moved to town in the early 1990s to raise her family, said the town’s low-key ways are part of its charm.

“Who wants to live in Hollywood?’’ she asked, recalling summer nights when locals of all ages gather on the town green to hear live bands. “We take care of our own.’’

Like many other towns, Townsend has come upon hard times. In a shopping center on the edge of town, for-lease signs hang in window after window.

Having coffee at McDonald’s next door, Dave Trudel, 56, said the local housing market is in tough shape. He used to build homes in town. Now he travels to auctions for foreclosed property.

“I don’t know what normal is anymore,’’ he said.