Despite back-breaking effort, it was a bad week for MBTA 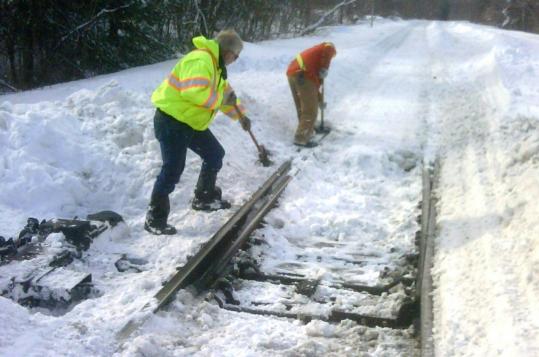 How discouraging a week was it for the MBTA and its riders? It began Monday morning with the arraignment on drunken-driving charges of a bus driver who rear-ended a car on the job. Beyond the courtroom, subzero temperatures were causing widespread equipment failure — making thousands late for work and stranding them for long, uncertain stretches in the piercing cold. And things scarcely seemed to get better from there.

The frigid weather and subsequent snowstorm foiled every mode of movement, particularly the commuter rail, where hundreds of trains were delayed, including several that arrived more than an hour late or were canceled altogether. On the rapid transit system, the four lines combined had dozens of disabled vehicles and an array of delays and disruptions; on the roads, scores of buses were diverted to snow routes or delayed in sluggish traffic. As if that were not enough, the service alerts on the T’s website shut down during Thursday’s snowy commute, overloaded by visitors.

Naturally, frustrated e-mails and calls came over the transom in waves, and hundreds more vented in the comments section on Boston.com.

“It’s the worst service I’ve ever seen,’’ said Kathy Mainzer, who drops her boyfriend off daily at Roslindale Village for a reverse commute on the Needham Line. On Monday his train went flying through the station 20 minutes late and failed to stop; Thursday it was canceled, and Mainzer drove him frantically from station to station — Roslindale to Highland to West Roxbury — in search of a train or information, before finally finding a station with a countdown sign — and a train on the way. The T-Alerts were little help.

“No wonder people give up on public transportation,’’ she said.

One morning, Paul Jean was sitting on the 5:22 a.m. out of Kingston, reading the latest T story in the Globe, when he realized his own train had stopped.

“Sure enough, train broke down in Hanson (frozen brake line I believe). They moved us off the train and then we boarded the 6:09 Kingston which did not finally arrive in South Station until about 7:45 — a 2 hour 20+ minute ride for what usually takes around an hour,’’ he e-mailed, adding, “Your story jinxed us!’’

In similar gallows humor, Bob Goodof of Needham remembered when he could set his watch by the train, before “labor dissension, poor maintenance, cost pressures [and] ennui’’ yielded an increasingly fitful experience. He compared one ride last week to a trip he took in the former East Germany just after the Berlin Wall came down.

Han Han of Quincy, who spent 70 minutes standing outside in below-zero weather on Monday, waiting first for a delayed Red Line and then a delayed bus, called it a failed system: “It’s embarrassing and pathetic that the MBTA seems to handle winter weather situations as if it never snows or gets bitterly cold in Boston.’’

The T had little chance of things running flawlessly last week. Some of the problems were out of their hands, such as railroad bridges that had to be closed for inspection after cars skidded into them, or gates that froze shut in the extreme cold or fizzled from too much road salt.

But the weather also exposed the fragility of the aged system and the T’s dire finances — with a backlog of more than $3 billion in maintenance work.

Yet, however challenged the T’s commuter rail was, it still fared a little better than the Long Island Rail Road and Amtrak, among others.

Which is not to say the T can’t do better; it can. MBTA General Manager Richard A. Davey, 10 months on the job, and his successor as GM of the commuter rail, Hugh Kiley, 90 days on the job, each vowed to learn from the past week and improve.

Both men also pointed to the hard work being done by thousands of employees. Some logged shifts of 20 or 30 hours trying to keep the system from grinding to a complete halt.

“I can’t say enough about them, and I’m concerned about their well-being,’’ Kiley said, calling the employees at the Massachusetts Bay Commuter Railroad — the T’s commuter rail contractor — “relentless’’ in their drive.

Consider the 250 or so workers charged with freeing snow from the commuter rail’s 380 switches, the indispensable mechanisms that allow trains to be guided from one track to another at rail junctions.

The switches are equipped with gas or electric snow melters, but they can’t keep up with heavy accumulation. So workers clear them manually with brooms and shovels, sometimes trekking a mile from grade crossings to reach them. And clearing them is a Sisyphean task; each train that passes packs snow back into them, and windblown drifts add to the accumulation.

Amid the discouragement, there were uplifting moments. As it often does in aiding cities and towns during emergencies, the T dispatched empty buses when a high-rise apartment building where Chinatown meets the Theater District had to be evacuated on the coldest night of the year, letting people warm up inside and transporting 200 of them to a shelter at the Josiah Quincy School.

And for all the complaints and money-back requests fielded by the customer service team, a few called or e-mailed to say thank you, including this one shared by T spokesman Joe Pesaturo: “I write to you from a dialysis clinic in Saugus. Gratefully, I made it here safely in the snow, with the help of G.L.S.S. RIDE driver Carlos Valentin (run #513). Mr. Valentin assisted me through foot deep snow all the way up the walk of my home to the van. I may have fallen without his excellent assistance. My highest regard for this RIDE employee. I’d like to see this note passed on to his managers and the highest at the T.’’

Others turned to Twitter, as Kate Norton did Thursday morning after a bus driver on the 215 from Quincy to Ashmont did more than make the usual stops, pulling alongside everyone who was trudging in the snow to ask if they were headed his way; once inside, he waived their fare.

The T tried to find the driver, but Norton didn’t know his badge number. They eventually tracked him down, and he had a good story to tell: Edward Banh, 61, whose Chinese-Vietnamese family started over in the United States in 1980, treats his passengers like family and loves to compete in the annual “bus roadeo.’’

He was inspired to apply for a job at the T 25 years ago after his daughter, 10 at the time, boarded the wrong bus in Chinatown and wound up alone in Newton. “The T uses the empty bus to send her home,’’ Banh said. “I said, ‘Wow, that’s a good service!’ ’’

The thing was, Banh wasn’t Norton’s driver, as she noted on Twitter and via the blog Universal Hub the next day; another driver on the route had been equally noble. As of press time, he remained unidentified — just another employee out of 6,000, trying to make the worst commuting week in recent memory a little less miserable.