Vacant building in Stoughton is latest to buckle 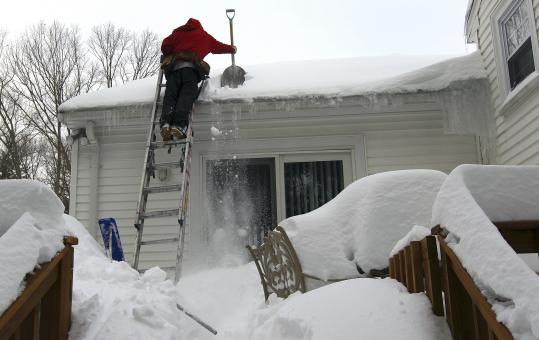 The roof of a boarded-up building in Stoughton gave way early yesterday under heavy snow, the latest of several roof collapses, including one Thursday in which two men escaped serious injury in Lynn.

A buildup of about 2 feet of snow caused a wall that had sustained damage in an October 2009 fire to buckle at about 3:15 a.m. yesterday. No one was injured. The space, which had been occupied by the Cheng-Du Restaurant, had been vacant since the blaze.

“The wall fell, pulling the roof, and everything went to the right. It was a combination of the snow and the weak wall,’’ said David M. Jardin, the town’s fire chief. The collapse, in the heart of the town’s center, caused lateral damage to two adjoining businesses, all part of a single-level building.

Jardin said the former site of the restaurant and an adjoining carpet business were damaged so severely that he immediately ordered them razed.

“It’s still moving, it has this creaky, eerie sound to it,’’ Jardin said. “The sound is telling you that the building is moving.’’ Town inspectors will evaluate the third adjoining business to see whether it can be rehabilitated.

After the 2009 fire, Jardin said, “the owner of the building was ordered to shore it up in order for someone to move in. Nobody was moving in, so it was just an empty space.’’

After the fire, the restaurant moved to another location nearby on Washington Street.

With at least four collapses this week in the region, including at the Casey and Hayes warehouse in West Bridgewater and at an unoccupied building in the Avon Industrial Park, authorities are calling attention to the threat of accumulated snow on rooftops caused by higher than average snowfall in recent weeks.

“I know a lot of commercial establishments are making efforts now to alleviate weight,’’ said Peter Judge, a spokesman for the Massachusetts Emergency Management Agency. “Most houses here have a good pitch to them, but homeowners need to pay attention to porches and garages as well.’’

Edward Bradley, Plymouth’s fire chief, said his department has visited three industrial parks to warn businesses of heavy snow on roofs. “Many of them already have some sort of plan to deal with it,’’ he said.

Roger Innes, the chief building inspector in Lynn, said authorities are working to minimize the threat of further collapse at the Greater Lynn Senior Services garage. On Thursday, Peter Sullivan, 55, of Beverly, and Cesar Jimenez, 59, of Salem, had to be rescued by firefighters after a 100-by-125-foot section of roof collapsed and buried the car they were in under debris and snow. Both men escaped serious injury after spending two hours trapped inside the crushed car.

“The roof is still unstable in that area,’’ Innes said. “All services have been disconnected and the building has been secured and isolated.’’

“It probably had over double the weight capacity on the roof,’’ he said. “It was certainly not something that could have been predicted.’’

Brian Ballou can be reached at bballou@globe.com.

Photos: Scenes from
another snowstorm