Trapped by walls of white

For the disabled and for seniors, an unshoveled walk is more than an annoyance — it is a barrier to life 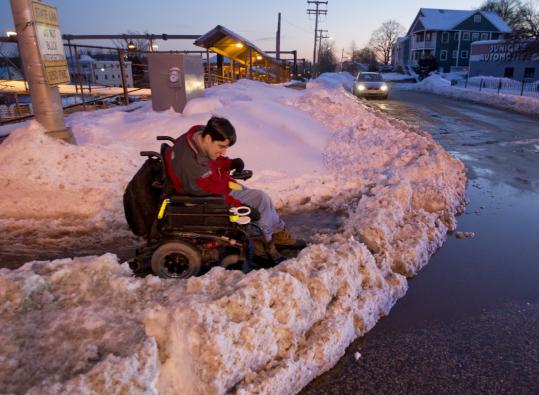 The stairs outside the Ruggles MBTA station had been shoveled, a nice clean path straight down the middle. That’s why Stacy Hart couldn’t use them.

To make the path, the snow had been moved to the sides, blocking access to the handrails. For Hart, who has cerebral palsy, that meant the stairs might as well have been a wall.

As snowstorm has chased snowstorm through the winter, the smallest details have made the difference between mobility and entrapment for many seniors and the disabled.

It is a problem of simple awareness, or unawareness, many advocates say; the shov eling is done by the able-bodied, and they often make the incorrect assumption that what is passable for them is passable for all.

“So many people just shovel a path that’s as wide as the shovel,’’ said Myra Berloff, director of the Massachusetts Office on Disability. “For people who use wheelchairs or walkers, they need at least 36 inches.’’

Another perennial problem lies in the curb ramps, which are often covered by snowplows. Hart and her husband, Chris, who also has cerebral palsy, were recently on a sidewalk downtown that had been well cleaned, but they had no way to get off of it.

Other times, a pond of slush covers a ramp. “If you can’t see what’s under the water, you can get caught in a pothole and get thrown out of your chair,’’ said Kristen McCosh, Boston’s commissioner for persons with disabilities and a former Ms. Wheelchair America.

When sidewalks are improperly shoveled, many people move to the street. The city of Boston, which requires at least a 42-inch-wide path to be shoveled, has received 2,100 complaints this month, according to the city’s code enforcement division.

“Riding [in a wheelchair] in the road is dangerous in good weather,’’ said Bill Henning, director of the Boston Center for Independent Living, where Stacy Hart works as a youth coordinator. “It becomes real hairy in high snowbanks. Cars come around a corner and don’t see you.’’

With the challenge to mobility comes the danger that many elderly and disabled will simply choose to stay home, advocates say.

“These barriers create more levels of dependence, and it’s all about independence, trying to live our lives as independently as possible,’’ said Oz Mondejar, vice president of community relations and human resources for the Spaulding Rehabilitation Network. “When you ask for help, it is just that.’’

Mondejar, who was born with only one partially functional hand, said excessive buildup of snow creates problems for a wide variety of disabilities, such as for the visually impaired who use canes to feel their way across the landscape.

“They navigate through way-finding, and all of a sudden the patterns have changed because the mounds are getting in the way.’’

Betsy Pillsbury, the disability resource coordinator at Spaulding, said the snow brings on fear that she will end up in a situation where she will be alone and unable to free herself. Wednesday morning, after the latest snowfall, that fear was realized when her wheelchair got stuck in a snow bank in a parking lot and she had to flag down a passing driver for assistance.

Many of those who are most in need of cleanly shoveled sidewalks are not able to clear their own. A growing number of programs are springing up to encourage people who need help shoveling to ask for it.

“For whatever reason it doesn’t get shoveled, the impact is still the same,’’ said Joseph Porcelli, head of the Jamaica Plain nonprofit Neighbors Helping Neighbors, who this year started a snow crew that uses online social networking to connect volunteer shovelers with people in need.

“If you need help, you need to put aside your ego and ask for it,’’ said Porcelli, who has connected 59 volunteers with several dozen residents this year in Jamaica Plain, and plans to take the program citywide next year.

In West Roxbury, which has the city’s highest population of residents over the age of 60 living in single-family homes, a pilot initiative called AgeWell West Roxbury is working on a similar approach.

Wendy Landman, executive director of the advocacy group WalkBoston, thinks thorough shoveling can become the norm if we look to the lessons learned from a past sidewalk issue: dog owners failing to clean up after their pets.

“It just became something you didn’t do,’’ she said. “And we can do the same with shoveling, create a new social norm.’’

Photos: Scenes from
another snowstorm