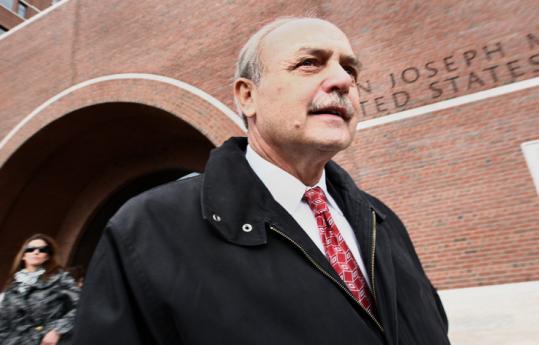 Salvatore F. DiMasi, the former House speaker, will stand trial in the spring after a federal judge refused yesterday to throw out a key charge against him.

US District Court chief judge Mark Wolf ruled against DiMasi and his three codefendants on several motions, delaying a decision on other motions until tomorrow.

Wolf allowed federal prosecutors to pursue an extortion charge against DiMasi. Prosecutors say he collected $57,000 from a software firm knowing the payment was made in exchange for his help securing two multimillion-dollar state contracts for the company. His codefendants are charged with conspiring with DiMasi to commit the crime, which carries a penalty of up to 20 years in prison.

In June 2009, DiMasi and three associates were accused in a 33-page indictment of colluding to steer two state contracts, worth $17.5 million, to , a Burlington software firm, in exchange for hundreds of thousands of dollars in cash payments, including the $57,000 allegedly funneled to DiMasi through a lawyer with whom he shared office space.

The four men were indicted after a series of Globe articles described how DiMasi’s associates had received payments from Cognos, but performed no work.

None of the lawyers would comment yesterday on Wolf’s rulings. Martin Weinberg, who represents Vitale, said the money his client received, $600,000 from Lally, was nothing more than legitimate consulting fees.

“This case will be the ultimate test of when constitutionally protected conduct, such as petitioning public officials or providing lobbying or legislative guidance, transitions into the crime the government has charged,’’ Weinberg said after the hearing in US District Court in Boston.

Anthony E. Fuller, one of three prosecutors in the case, called Weinberg’s argument “a stretch,’’ adding that “what’s alleged here is fraud.’’

Wolf, who asked defense lawyers skeptical questions throughout the daylong hearing, delayed ruling on the defendants’ challenges to another part of the case: fraud charges based on a federal law that has been used to prosecute this and other corruption cases around the country. The law says citizens have a right to expect public officials to perform their jobs honestly in the public interest, not their own.

In June, the US Supreme Court narrowed the law, ruling that it should be used only in cases that involve accusations of bribery or kickbacks.

Defense lawyers argued that the money DiMasi pocketed was not a bribe because it was not offered in exchange for an official action. At worst, it was a gratuity, offered to generate goodwill and curry favor, they say.

Wolf’s refusal to throw out the extortion charge means prosecutors can argue that the payments constituted bribery, and it suggests the judge may also be willing to let the fraud charges stand.

Prosecutors accuse the four of conspiring to funnel money from Cognos to DiMasi in return for his help getting the company contracts. They concocted a sham consulting arrangement, prosecutors say, involving Steven Topazio, the lawyer who shared office space with DiMasi.

Lally and McDonough are accused of arranging to have Cognos pay Topazio $5,000 a month in consulting fees, even though no work was performed. Topazio gave nearly half of the $120,000 he was paid between 2005 and 2007 to DiMasi, prosecutors say. Those payments, disguised as lobbying fees, were concealed bribes, prosecutors allege.

Wolf also refused to remove from the indictment the mention of a line of credit Vitale gave DiMasi in 2006, after Vitale set up the company that received hundreds of thousands of dollars from Cognos, through Lally.

Weinberg argued that keeping it in the case would be highly prejudicial because there was no evidence the line of credit, secured by a mortgage on DiMasi’s North End condo, had anything to do with the alleged scheme.