Cyclists found a friendlier Boston in 2010 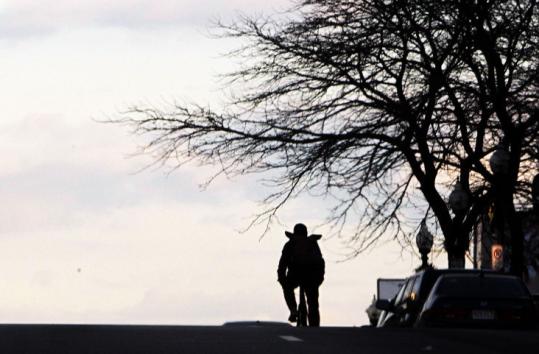 As a part of a long-term plan to dislodge Boston from its historic standing among the nation’s least-friendly places for bicycling, the city installed a record number of bike lanes last year, expanded safety efforts, and advanced a bike share program that could debut this summer.

Bike lanes still occupy only a small fraction of city streets, and safety remains an ongoing concern in a city with cramped roads and no shortage of aggressive drivers. But 2010 was a watershed year for biking in Boston, said Nicole Freedman, director of the city’s Boston Bikes program, who will release an annual report on the state of biking in Boston at a forum tonight.

“It was really a breakout year,’’ said Freedman, the urban planner and former Olympic cyclist hired by Mayor Thomas M. Menino to establish Boston Bikes in 2007.

Freedman will detail recent achievements and upcoming goals — including the potential summer 2011 introduction of the bike share program, once envisioned for 2010 — and seek public feedback at a forum at the Boston Public Library’s Rabb Lecture Hall, from 6:30 p.m. to 8:30 p.m. The bike share program would include 600 bikes and 60 rental stations, to encourage more bike trips for reasons of public health and reducing automobile congestion.

The 20 miles of bike lanes added to city roads in 2010 brought the total in Boston to 35 miles over the past three years — up from one block when Freedman started. The lanes supplemented 20 miles of existing off-street recreation paths that welcome bicyclists.

The latest additions included left-side lanes on Commonwealth Avenue and Boston’s first “cycle track,’’ on Western Avenue, where the parking lane has been moved to the traffic side of the bike lane.

In three years, Boston has added more than 1,600 city-owned bike parking spaces on hitch racks and introduced community programs to spread bicycling to all neighborhoods. They include programs to refurbish and distribute bicycles to low-income families and set up bike-repair tents at farmer’s markets in areas that lack bike shops.

After a fatal accident last April, the city convened the first of two safety summits with local and state officials, which prompted the Boston Police Department to update its accident reporting to track bicycle crashes and the MBTA to introduce bike scenarios to its training simulator for bus drivers, among other changes. The city also began selling low-cost bike helmets, targeting enforcement of bicycle and motor vehicle laws in high-crash areas, and sending bike-education mailers to everyone with a car registered in the city.

In a sign of improvement, the League of American Bicyclists last year ranked Boston 10th out of the 70 largest cities for bike ridership among commuters, based on annual data compiled by the US Census Bureau; in 2009, 2.1 percent of Bostonians regularly biked to work, more than double the percent in the average city and a 118 percent increase since 2000.

Also, last year the Alliance for Biking & Walking found fewer fatalities per 10,000 bicyclists in Boston than in most peer cities. But the potential danger was underscored earlier this week, when a 74-year-old bicyclist was killed on Monday near the corner of Tremont and Arlington streets.

“Every fatality is a tragedy, and statistics don’t matter to an individual,’’ Freedman said. “We can always do better — and we will.’’

The total number of bicyclists in Boston is difficult to estimate, but the city last year engaged more than 35,000 riders in a variety of programs, such as Hub on Wheels and Bike Friday. The Hub program is a charity bike ride across the city, and Bike Friday is a convoy program that encourages new riders to bike to work with the help of experienced cyclists and police.

The event, the third annual forum since the creation of Boston Bikes, provides an opportunity for residents and commuters to share their thoughts about the city’s progress and their future goals, said Jackie Douglas, director of the LivableStreets Alliance

Eric Moskowitz can be reached at emoskowitz@globe.com. Last-minute information on the event can be found at livablestreets.info.