But his proposal would boost funds for schools, roads 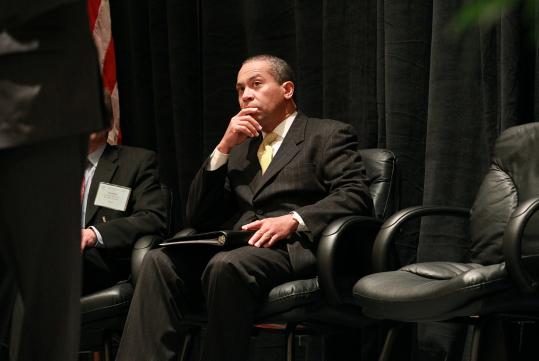 Governor Deval Patrick, moving to close a gaping shortfall in next fiscal year’s state budget, proposed slashing local aid to cities and towns by 7 percent yesterday, but giving them more money for schools and roads, along with greater power to curb crushing health insurance costs.

The governor’s proposed $65 million cut in local aid would mark the fourth consecutive year that the money — which helps pay for police officers, firefighters, senior centers, and other local services — has been reduced. Local aid has been cut by 32 percent, or $416 million, over the last three years, according to the Massachusetts Municipal Association.

Municipal officials, who were bracing for a local aid cut in the budget year that begins July 1, nevertheless expressed chagrin that the account would be slashed again. They said it would inevitably trigger further cuts in communities that have already laid off workers in schools and town halls, closed libraries and firehouses, and reduced other basic services.

Yet even as they lamented the proposed loss in aid, local officials welcomed the governor’s plan to increase spending on schools by $140 million, to the highest level in history, and on roads and bridges by $45 million. And they warmly, if cautiously, greeted the governor’s proposal to help them cut their health insurance costs, even though the plan deliberately pushes off the most difficult decisions for a later day.

“He understands that if he’s going to cut local aid — which every one of us acknowledges he has to do — in order to survive, he’s got to do something with health insurance,’’ said Mayor Robert J. Dolan of Melrose. “It has to get done now.’’

Offering a preview of the state budget Patrick will unveil Wednesday, the governor outlined the proposals before hundreds of local officials at the annual meeting of the Massachusetts Municipal Association, which represents cities and towns.

His proposals now become part of the budget debate with the House and Senate.

The governor said that the cut in local aid was “unavoidable,’’ with the state facing a $1.5 billion budget gap and the loss of $1.5 billion in federal stimulus money next year. He acknowledged that local aid is one of many areas of the budget that will have to be trimmed to make up the shortfall.

At the same time, Patrick said, he was filing legislation that would help cities and towns cut their health insurance costs, in part by requiring them to move municipal retirees into Medicare. Currently, town meetings and city councils must vote to move their retirees into Medicare, and only 40 percent of cities and towns have done so, state officials said. If enacted, Patrick said, his bill would save communities $120 million, more than making up for the cut in local aid.

“That’s money you can use right now and in the future to keep teachers in the classroom, police and firefighters on the streets, senior centers and libraries open,’’ Patrick said.

In making his municipal health insurance proposal, Patrick is seeking to force a resolution between city and town leaders, who have been fighting to cut their insurance costs, and labor unions, which have fiercely protected their members’ benefits, many of which are far more generous than those in the private sector.

Currently, local officials must negotiate any changes in benefits with municipal unions, making it difficult to cut costs. Cities and towns must also win union approval to join the state health insurance program, the Group Insurance Commission, which would save them money. Some communities have joined, but unions have blocked many from doing so.

Patrick’s plan would give more power to municipal leaders, because it would allow unions to negotiate changes for only a “very truncated and abbreviated’’ period, he said. If unions and local officials cannot reach an agreement by July 1, their communities must either join the Group Insurance Commission or devise a local plan of equal or lesser cost.

“As I said all along, labor is entitled to, and deserves, a meaningful role,’’ he said. “They will have it, but not a veto.’’

The governor was vague on a few key points, including exactly how much power unions will retain in the negotiations.

Patrick said he was intentionally glossing over some of the thorniest questions because he did not want the bill to get bogged down in the details. He said his unsuccessful push for casinos had taught him not to let lawmakers scuttle bills by haggling over the fine print.

“Unions stand ready to be part of the solution to the health care cost crisis in which we all find ourselves,’’ Robert J. Haynes, president of the Massachusetts AFL-CIO, said in a statement. “The only way to ensure we are part of the solution is to guarantee that we have a voice and meaningful role in how cost savings are achieved. That voice and that role is called collective bargaining.’’

Some mayors and town administrators expressed disappointment that the proposal would not give them unilateral power to design workers’ health plans.

But they still praised it as a major step forward.

“Cities and towns need this relief,’’ said Marc Draisen, executive director of the Metropolitan Area Planning Council, which helps 101 communities in Eastern Massachusetts manage their growth and finances. “It’s a good way to save money, employees will still have excellent coverage, and it will prevent layoffs of municipal employees, which is key if local aid is going to be reduced.’’

House Speaker Robert A. DeLeo, who earlier this month broke with his union allies by advocating a lesser role for labor in health care negotiations, said through his spokesman yesterday that he welcomed the governor’s proposal.

Senate President Therese Murray released a noncommittal statement, saying, “I commend Governor Patrick for working with us and sticking to his mission to help communities weather the economic downturn and give them the tools they need to grow stronger.’’

Patrick, who had vowed not to raise taxes this year, also proposed removing the sales tax exemption on telecommunications equipment, which he said would raise $26 million for cities and towns.

“There’s no rationale for this exemption,’’ he said.