But 48-year-old headed for prison 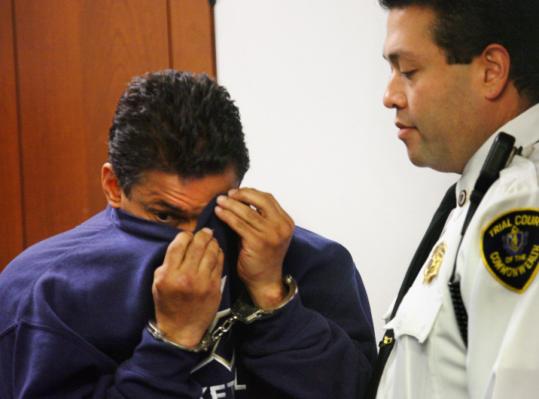 A man who was accused of robbing a taxi company at gunpoint in 2009, while he was free on parole after participating in two killings, had the robbery charges dropped yesterday.

But he is still returning to prison, possibly for life.

Gerald M. Hill, 48, who has been in jail for most of his life, was successful last month in having evidence suppressed from a trial in the robbery case because, a judge ruled, police had no right to search a cab he was riding in Boston after the heist. In the robbery case, on Nov. 9, 2009, he was accused of pistol whipping a dispatcher at Boston Cab Co. in the Fenway, pointed the gun at others, and made off with more than $20,000 in cash. Police later found two guns and the cash in a bag Hill had in the cab, not long after the shooting.

But a judge ruled that a police officer who saw Hill enter the cab looking suspicious had no right to stop him because nothing connected him to the robbery. Because the evidence was suppressed, prosecutors said, they no longer had enough of a case to prosecute Hill. The charges, which could have sent Hill to life in prison again, were dropped yesterday in Suffolk Superior Court.

But parole officials moved to keep Hill detained for violating parole on his past murder convictions. Officials cited a Supreme Judicial Court decision that held that a defendant’s parole can be revoked on underlying evidence, even if that evidence cannot be used in a criminal court. In this case, police say they found Hill with two guns.

“The net result is the same: Gerald Hill is going back to prison, where he belongs,’’ said Jake Wark, a spokesman for District Attorney Daniel F. Conley.

A codefendant in the case, 54-year-old Marvin Smith, still faces charges including armed robbery while masked and assault and battery with a dangerous weapon.

Hill had been convicted of murder for participating in the killing of Max Fishman, an oil deliveryman, during the Blizzard of 1978. Hill was 15 at the time and was already facing trial in the fatal stabbing in 1977 of Leo Murphy during an argument in Boston. Hill was sentenced to concurrent sentences of 15 years to life in both slayings.

A divided board granted him parole in July 2006, although Hill had to spend three more years in progressively less secure prisons to show he was fit to be released. He was freed on Sept. 3, 2009, and allegedly committed the robbery in Boston 67 days later.

Donald Shapiro — the son-in-law of Max Fishman, the man killed in 1978 — said yesterday that his family had hoped he would have been convicted of the robbery charges and sent back to jail for life. But Hill should not have been released in the first place, Shapiro said, lamenting that his family will have to undergo the parole process again if the parole is rescinded.

“We’re just feeling like we’re right back into this,’’ Shapiro said.

He said the cases of Hill and Domenic Cinelli, two parolees who went on to commit new crimes, show that the criminal justice system needs to find new ways to deal with career criminals.

“They need to take these violent offenders and say, ‘Based on your history, and based on your crimes, you’re not going to be released,’ ’’ Shapiro said.

According to Terrel Harris, a spokesman for the Executive Office of Public Safety and Security, the state Parole Board will decide within 60 days whether Hill’s parole should be revoked. He is being held until then. If his parole is revoked, then Hill would have to resume the typical process to seek his release.

But under recent changes at the Parole Board, Hill could be jailed for the rest of his life. The board came under fire for its decision to release Hill in the first place, based on his past crimes. Also, the board is under fire again for its decision to release Cinelli, the career criminal who killed Woburn police Officer John Maguire during a robbery last month while he was out on parole. Cinelli was also killed in the shootout.

On Jan. 13, Governor Deval Patrick accepted the resignation of all members of the Parole Board and issued a moratorium on parole hearings for defendants facing sentences of 15 years to life.