Rescuers save dog stuck for days on frozen reservoir 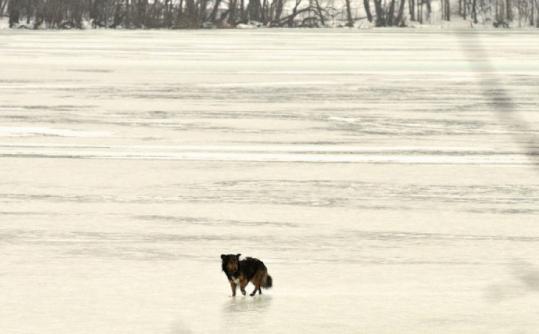 A frightened dog stuck on a frozen Cambridge reservoir was rescued yesterday after spending several days on the ice evading attempts to bring her ashore.

Gibson, a 4-year-old sheltie mix, was first spotted on Fresh Pond Sunday by multiple callers to the Animal Rescue League of Boston, rescue services manager Brian O’Connor said. The owner, who wished to remain anonymous, reported that the dog had been missing for more than a week.

The pond is fenced off. “How she got in, nobody knows, but she obviously couldn’t get out,’’ O’Connor said.

A three-person Animal Rescue League team was sent out Sunday, but the dog ran away as soon as they approached.

Gibson even refused to be rescued when her owner came to the reservoir on Tuesday.

“The dog kind of reverted to a semiwild, self-preservation state,’’ O’Connor said. “They’re not like people. You can’t rationalize with them and tell them you’re there to rescue them.’’

At about 1 p.m. yesterday, six Animal Rescue League workers were able to close in on the dog using four-wheelers from the Cambridge Water Department to navigate the pond, which is more than two miles around. An initial attempt to catch the 20-pound dog with a net was unsuccessful and nearly resulted in a rescuer being bitten, O’Connor said.

That rescuer, however, was able to distract Gibson long enough for a second net to be thrown, capturing the dog.

O’Connor said the dog was taken to a clinic at the Animal Rescue League’s South Boston headquarters, where a veterinarian found her “a little bit skinny and dehydrated.’’

Gibson was allowed to go home with her owner last night.

Neal Riley can be reached at nriley@globe.com.