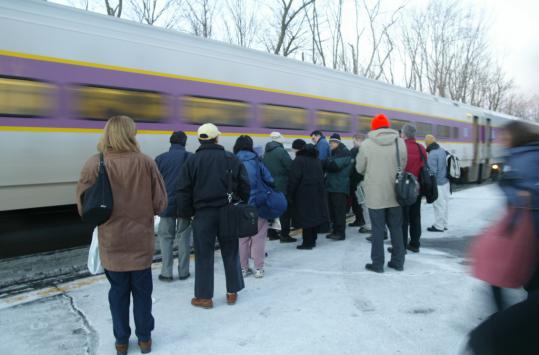 A report released yesterday by the state auditor says the MBTA has been too generous with its commuter rail contractor, handing out tens of millions of dollars in fees and incentives, on top of a billion-dollar contract, while failing to collect full penalties for late trains and other performance lapses.

In particular, the report criticized $11.2 million in payments as “double billing’’ — labor costs that should have been covered by the Massachusetts Bay Transportation Authority’s contract with the Massachusetts Bay Commuter Railroad Co., the private company that operates the commuter rail, according to Auditor A. Joseph DeNucci.

The payments were enabled by a series of amendments approved by the MBTA’s board of directors, making them legal — but not beneficial to the T and taxpayers, the auditor said.

“Rather than demand compliance with the original terms of this contract, the MBTA has consistently made concessions to the benefit of the commuter rail contractor and to the detriment of the farepayers and taxpayers,’’ DeNucci, who is retiring today after six terms as auditor, said in a statement. He urged the MBTA to strengthen its contract oversight and “end these double billings.’’

The MBTA disputed the findings as “erroneous and misleading.’’ In a response to the auditor’s draft findings, the T called the amendments incentive payments and said it waived penalties necessary to keep the complex commuter rail deal from proving too onerous.

The T manages its buses, subways, and trolleys, but uses the private contractor to operate and maintain the commuter rail system, which carries about 65,000 suburban workers to and from North Station and South Station each weekday.

Amtrak held the contract from 1987 through 2003, when the MBCR took over, winning a five-year contract worth more than $1 billion. The T has granted the company two contract extensions, with the latest extension worth more than $250 million a year and running through June 2013.

The original contract called for the company not just to run trains and punch tickets, but to provide some annual maintenance and repairs. It also allowed the T to direct extra infrastructure work and other jobs to the company without needing to open the projects to bidding — based on the belief that MBCR could do the work faster and cheaper than other companies.

That extra work — officially known as “force account’’ work — has included projects and tasks as varied as reconstructing the Route 140 bridge in Franklin and purchasing 100 snow blowers. The contractor was entitled to tack on a management fee for purchases and to bill the T for employee overtime on projects, while making an effort to do the work without overtime.

But a 2005 amendment approved by the MBTA’s board of directors made that work more lucrative by allowing “double billing’’ of all wages and benefits for those projects, the auditor found. Those additional labor payments are valued at $11.2 million through fiscal 2008 — the end of the initial contract — and projected to total over $40 million by the end of 2013.

The auditor said that work either should be considered part of the original contract or should be opened to public bidding.

Additionally, the report found that the T doled out $2.5 million in what the auditor considered “questionable’’ incentives for increasing ridership and management fees for purchases that could have been made by the MBTA itself.

And the auditor found that the T’s board in the first five years assessed $6.7 million in fines for delayed trains, inadequately cleaned stations, and other missed performance measures — well short of the $49.6 million in fines that could have been assessed had the board not amended the contract multiple times.

“The billings by MBCR were perfectly legal under the terms of the contract amendments,’’ said Glenn Briere, a spokesman for DeNucci. But he said those amendments occurred to the T’s detriment. “Normally you amend the contract to get a better deal for your agency.’’

In its response, the T said the amended contract still ranked among the most rigorous and extensive of any commuter rail operating agreement in the country. The T said the contractor had been burdened initially by a federal requirement that it retain all of the employees who had worked on the commuter rail for Amtrak, and that the penalty structure without amendments would have proved more harsh than intended and jeopardized MBCR’s financial stability.

Brian Kane, a budget and policy analyst for the group representing cities and towns in the T’s service area, said the MBTA board should review the audit thoroughly and discuss it publicly. He said the T, given its own financial trouble, should exercise money-saving provisions in the contract “powerfully, forcefully, and to the maximum amount possible. But right now I want to give them the benefit of the doubt to adequately explain themselves over and above the auditor’s report.’’