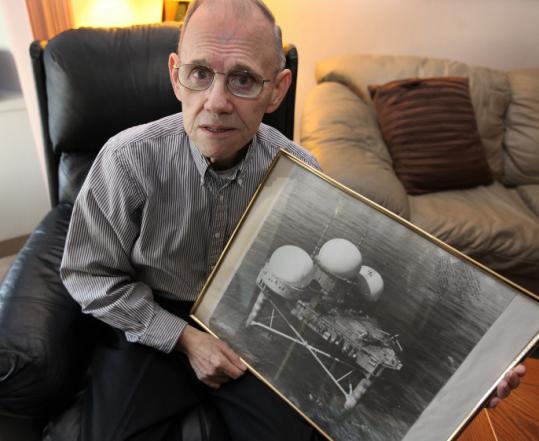 Don Abbott, 71, has been fighting for recognition for the men who died 50 years ago on the Texas Towers (pictured), including his father, David. The son’s mission was fulfilled this past weekend, when he got word that President Obama will recognize the men in a letter to their families. (Pat Greenhouse/ Globe Staff)
By John M. Guilfoil Globe Staff / January 17, 2011

Fifty years ago this weekend, a NORAD radar platform collapsed and sank in a nor’easter more than 80 miles off the coast of New York, killing all 28 crew members aboard, most of them New Englanders stationed at Otis Air Force Base.

Soon, those men, plus four others who died in accidents on other platforms, elements of the US air defense system, will be recognized in a formal letter to their families from President Obama.

The acknowledgment came Saturday, the 50th anniversary of the 1961 sinking. It is the culmination of more than a decade of work largely by three men: a son of a victim; a civilian technician who left the platform just days before the sinking; and Senator John F. Kerry, who has petitioned three presidents to honor the victims who died on the platforms, known as Texas Towers.

Obama’s letter will be addressed to 71-year-old Don Abbott, the son of David Abbott of Malden, a civilian welder who died aboard a platform called Texas Tower 4, according to Kerry’s office. Don Abbott, who still lives in Malden, was 21 and serving in the Air Force when he dropped his father off at a store to buy chewing tobacco before his last stint aboard Texas Tower 4. He never saw his father again.

Kerry’s office will hand-deliver the letter to Abbott, who has spent years trying to win recognition for his father and the others.

The recognition comes at a critical time, as the Texas Towers, relics of the Cold War, fade from memory. Many of the victims’ family members have died over the years, and Abbott suffers from heart disease.

Abbott, who runs a website for the families of Texas Tower victims and served as president of the Texas Tower Association, said he feels fulfilled.

Donald Slutzky, 76, of Germantown, Md., worked as a civilian computer technician aboard Texas Tower 4 and rode out a direct hit from Hurricane Donna in the fall of 1960, but left in January, days before the tower sank.

Slutzky said that he has suffered survivor’s guilt, but that working with Abbott has proven to be an amazing form of therapy. The two men became friends after they met in 1999 on a tour of the wreckage site.

“I had nightmares that I was trapped on the tower and trying to find a way out for me and the other guys I knew,’’ he said. “I started drinking. I couldn’t stay in a room very long. I felt confined. This lasted a long time.’’

He kept a model of the tower on his dresser but didn’t tell his wife, Ruth, the story of Tower 4 until 1999.

Over the past decade, officials such as Al Gore, the former vice president, and various congressmen and senators have expressed gratitude to the families of the Texas Tower victims, but Abbott, Slutzky, and others said that only the president can convey the feelings of “a grateful nation.’’

“Time shouldn’t be able to wash away the contributions of citizens who served and sacrificed in the name of [their] country,’’ Kerry said in a statement Saturday. “It should have happened a lot earlier. But 50 years later, there’s still a hole that can’t be filled and there’s still a place missing at family gatherings for these families.’’

In the 1950s, four other men died in separate episodes on the other two radar platforms that sat in international waters off the East Coast, meant to provide crucial minutes of warning that Soviet bombers were coming.

Known by its staff as “Old Shaky,’’ Tower 4 was set in deeper waters than the other stations and required more bracing to stay in place.

The tower earned its nickname because it would jolt violently, even in moderate seas. In 2003, the History Channel released a DVD chronicling the disaster, pointing out design and engineering problems.

Tower 4 was badly damaged when it took a direct hit from Hurricane Donna in late 1960. The Air Force kept it operational, but patchwork repairs did not hold.

With a winter storm approaching on Jan. 14, 1961, a Navy cargo ship arrived with supplies and was ordered to stand by in case the station had to be abandoned. As the rough seas pounded the platform, it began to tear loose from its remaining braces.

The Air Force ordered the platform abandoned the next afternoon, but the cargo ship was having trouble reaching the platform this time. The Navy sent the aircraft carrier USS Wasp to the area and numerous Coast Guard cutters were dispatched.

But around 7 p.m., as the cargo ship approached, the station disappeared from radar as it dropped below the sea.

“This will finally bring closure to the families that have never experienced closure,’’ Slutzky said. “They were lost in history.’’