THIS STORY HAS BEEN FORMATTED FOR EASY PRINTING
Adrian Walker 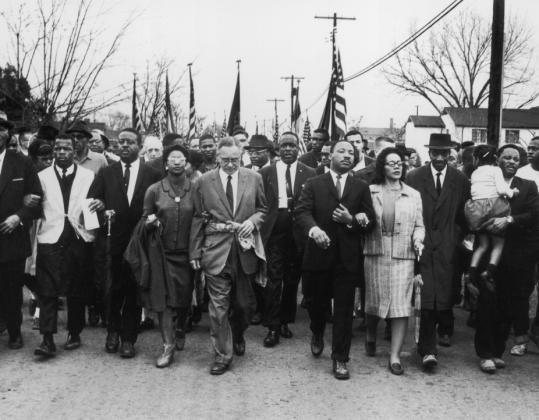 In 1965, Jonathan Daniels was a seminary student when he answered Martin Luther King Jr.’s call to go south and march, becoming a civil rights activist. Daniels was shot and killed protecting Ruby Sales, then 16, from a gunman at an Alabama store. (William Lovelace/ Express/ Getty Images)
By Adrian Walker Globe Columnist / January 17, 2011

Ruby Sales, an activist and scholar in Atlanta, is just one person who will be remembering Jonathan Daniels today, on the celebration of Martin Luther King Jr.’s 82d birthday.

Daniels was a seminarian at the Episcopal Theological School in Cambridge — now the Episcopal Divinity School — who was slain in Alabama in 1965, at the height of the civil rights movement. He, like many other white college students, had answered a call from King to go south to march, and stayed to organize, register voters, and bear witness.

He and other activists, including Sales — a young African-American woman — were arrested in Fort Deposit and jailed in the small Alabama town of Hayneville. Within hours of their release on Aug. 20, 1965, Daniels was shot and killed. He was 26 years old.

Daniels had not headed to Alabama alone. He was part of a group of students who left Cambridge to participate in the movement. After his slaying more activists would follow, in part to honor his memory, according to Rev. Edward Rodman, a classmate of Daniels’s who is now a professor at the Episcopal Divinity School. “I would say there were at least 15, probably a few more,’’ Rodman said. “Some of them stayed after everything was over and some of them went back to Hayneville. Those are the real heroes, in my view.’’

The King holiday is, of course, an official celebration of a great American life. But it also commemorates a movement that was far larger than any single individual, even King.

Daniels entered Episcopal Theological School in 1963. A native of Keene, N.H., he studied at Virginia Military Institute before entering the seminary. Classmates recall that he stood out for his probing intellect and determination to make a difference. Blayney Colmore, a classmate from North Carolina, recalls that they clashed early on as classmates, because Daniels thought Colmore lacked theological rigor.

“He had been raised among Jesuits, which means he had engaged theologically in a very serious way,’’ Colmore said last week.

In spring 1965, King was taken with the idea of a 50-mile march from Selma to Montgomery, to bring national attention to the hardships faced by blacks in Alabama who were being terrorized by the Ku Klux Klan, among others. The first attempt to cross the Edmund Pettus Bridge resulted in the now-legendary Bloody Sunday, in which nonviolent protesters were beaten and turned back by police with clubs and dogs.

Daniels and another student, Judith Upham, answered a call for more protesters, and took part in the third, triumphant march two weeks later. By then, Daniels had decided to spend more time in Alabama. He arranged to take off the remainder of the semester and moved in with a black family.

Among his projects was an attempt to integrate a white Episcopal church in Selma. Every Sunday, Daniels would appear with a small group of black worshipers — and every Sunday they were sent away, redirected to the black Episcopal church across town.

In his trips back to Cambridge, he described what could only be called an awakening. “He said he had never even dreamed of a community like the one he lived in in Selma,’’ Colmore said. “He said, ‘I’m scared all the time, but not scared enough to give up the life I’ve gained there.’ ’’

He was arrested, along with others — Ruby Sales, then just 16, among them — for protesting at a small variety store where black sharecroppers were being exploited. They were taken to jail, and harassed and threatened for days, recalls Sales. Sales recalls being threatened with rape. Unlike many activists, she had never been to jail before.

“I came from a family where jail was absolutely taboo, and only bad women went to jail,’’ she said. “But it had been transformed into a place of resistance, a place of honor, a place of courage. And people in jail were no longer seen as flawed — they were seen as freedom fighters.’’

After a week they were suddenly freed, released on their own recognizance. In retrospect, Sales said, they should have seen the abrupt release as suspicious; there were no lawyers or fellow activists to greet them and guide them to safety, which was the usual practice. She is convinced their release was a set-up, an ambush of sorts.

The day was hot, as August in Alabama is, and all they thought about was buying Coca-Colas to cool off. They went to a local store, where, she said, a man named Tom Coleman yelled an epithet and began firing. Daniels pulled down Sales and was shot, along with Father Richard Morrisroe. Daniels was pronounced dead at the local hospital; Morrisroe, whom doctors initially refused to treat, was lucky to survive.

Coleman was acquitted, in what many saw as a show trial, in 1965.

Sales, now 61, went on to graduate from Episcopal Divinity School in 1999. Among her current projects is an institute that trains young activists, and is named for Jonathan Daniels.

As King always insisted, it was a movement to liberate not black Americans, but Americans.

“If I had never met a Jonathan Daniels, I would have only had a monolithic view of white people and he would have had one view of black people,’’ she said.

“We opened up each other’s worlds so we could see each other’s humanity. That’s really what the movement was about.’’

Adrian Walker is a Globe columnist. He can be reached at walker@globe.com.