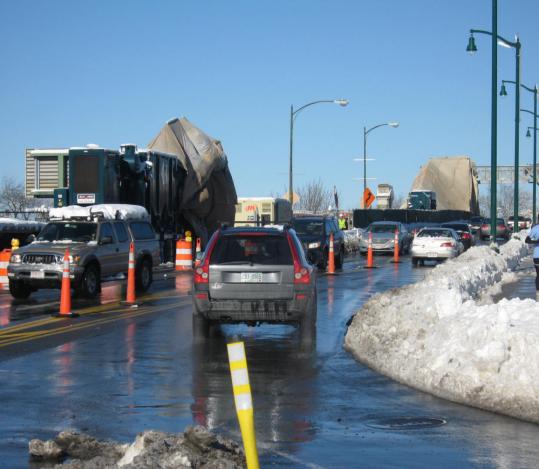 A reader says the reduction of travel lanes on the Boston University Bridge during construction has caused traffic backups. The Massachusetts Department of Transportation said construction is 40 percent complete and slated to conclude in December. (Christina Pazzanese for The Boston Globe)
By Christina Pazzanese Globe Correspondent / January 17, 2011

Reader Kenneth Settel of Brookline has been keeping an eye on the slow-moving progress being made to the massive, two-years-and-counting overhaul of the Boston University Bridge.

He asked GlobeWatch if the lengthy traffic backups caused by its construction are a temporary headache or something more permanent.

“The prolonged reconstruction of the BU Bridge has left the traffic reduced to one lane in each direction,’’ Settel wrote in an e-mail. “During rush hour, especially in the early evening, it may take 20 minutes or longer for the merging traffic from Cambridge to get across the bridge to Boston because of the lane reduction. This is an enormous waste of time for all drivers, lasting sometimes for hours!

“I understand now that this lane reduction will be permanent when the bridge reopens completed in a year or more to allow for bicycle lanes in each direction,’’ he says. “The volume of traffic clearly warrants two lanes for traffic in each direction. A permanent reduction of auto lanes to one lane will likely cause permanent gridlock in this area.’’

Settel asked why the pedestrian paths can’t also be used by bicyclists so that the bridge can return to four travel lanes for vehicles.

Or, if that’s not possible, why the project planners haven’t thought to build cantilevered pathways attached to the outside of the bridge.

A midday visit by a Globe reporter last week found drivers moving slowly and gingerly through the travel lanes, lined with orange cones, as contractors with heavy equipment worked nearby.

Though there was a relatively low volume of traffic at the time, it was clear that during rush hour, the single lanes would not adequately accommodate the large number of vehicles entering from Commonwealth Avenue and Memorial Drive.

THE STATE RESPONDS
The current lane configuration is temporary, according to Adam Hurtubise, a spokesman for the Massachusetts Department of Transportation.

MassDOT took over the project from the Department of Conservation and Recreation in 2009.

Because the bridge replacement is being done in thirds, the remaining two-thirds of the bridge can only accommodate a maximum of two lanes of traffic, he said in an e-mailed response.

The travel lanes will be ‘one lane on, one lane off’ — meaning a single travel lane onto the bridge will originate in both Boston and Cambridge. As these single lanes reach the center of the bridge, they will transition to two lanes to exit the bridge,’’ Hurtubise said.

Lane adjustments may be tweaked again as final design is completed for an adjoining project to replace the Commonwealth Ave./Green Line Bridge over the Massachusetts Turnpike and some nearby side streets.

As for bikes and pedestrians, they are allowed to share bridge sidewalks, Hurtubise said. But given the “strong desire’’ by bicycle groups and others to have a separate, pedestrian-free space for more advanced riders, the plans for two dedicated bike lanes was born.

Cantilevered walkways were considered, but given the structural limitations of the bridge, they are not an option without significantly more work.

Construction is approximately 40 percent complete and is slated to conclude in December, he said.