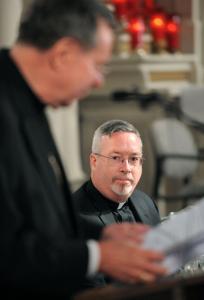 Pope Benedict XVI named the Rev. Christopher J. Coyne, a spokesman for Cardinal Bernard F. Law at the height of the sexual abuse crisis and more recently the pastor of St. Margaret Mary Parish in Westwood, as auxiliary bishop of the Archdiocese of Indianapolis yesterday.

Coyne is the first assistant bishop appointed in more than 77 years to Indianapolis, which serves 225,000 Catholics in central and southern Indiana. Archbishop, Daniel M. Buechlein, 72, suffered a bout of Hodgkin’s lymphoma in 2008.

In a statement, Cardinal Seán P. O’Malley said that Indianapolis was “blessed to receive one of Boston’s finest priests.’’

Advocates for victims of sexual abuse, however, criticized the pope for appointing as bishop a priest so closely associated with Law, who stepped aside in 2003 over criticism of his handling of the sexual abuse crisis.

“There are still millions of betrayed Catholics and hundreds of thousands of wounded adults whose suffering is exacerbated by this,’’ said David Clohessy, executive director of the Survivors Network of Those Abused by Priests.

Coyne was not available for an interview yesterday, but at a press conference in Indianapolis said his work in Boston during the abuse crisis had taught him the “need to listen to what is being said with an open heart and an open mind.’’

“I was never asked to defend the indefensible, and I never did,’’ he said, according to the Indianapolis Star.

He said that he intended to learn to be a “good bishop,’’ adding that he also hoped to someday become “a true son of Indiana.’’

Coyne, 52, was a seminary professor and director of the office for worship at the archdiocese before Law began deploying him as a spokesman in spring 2002, amid a deluge of revelations about the church’s coverup of sexual abuse and calls for Law’s resignation.

The church had been excoriated for its initial response to the crisis, which was widely seen as aloof and callous. By the time Coyne began speaking on Law’s behalf, the cardinal had been forced to assume a more defensive posture, and Coyne struck a more direct, compassionate tone.

The grueling nature of his job hardly diminished over his tenure, which spanned the resignation of Law, the wrenching closure of dozens of parishes — a handful of which are still fighting to reopen — and the arrival of a new archbishop.

“He tried to be as forthright and as diligent in providing information to the public through the press as he could be,’’ said Ann Carter, chief executive officer of Rasky Baerlein Strategic Communications Inc. Her firm resigned as the archdiocese’s outside public relations firm early in the sexual abuse crisis but resumed its work for the church after Law resigned, and after that point worked closely with Coyne.

“I think he also acknowledged the pain that people were feeling,’’ Carter said. “He was very much in touch with the sentiment both among the clergy and among the people of the archdiocese.’’

But others saw him as little more than a mouthpiece for the archdiocese.

“He’s probably demonstrated to them that he is an effective task master, good at speaking with news media and taking direction,’’ said Phil Saviano, a victim of sexual abuse who lives in Roslindale.

In fall 2005, O’Malley sent Coyne to replace the Rev. Walter Cuenin at Our Lady Help of Christians in Newton. Cuenin, a beloved pastor, had provoked church leaders by speaking out against Law during the sexual abuse crisis; many parishioners saw Cuenin’s ouster for alleged financial wrongdoing as retribution, and they felt deeply wounded. After a four-month stay that Coyne described as an “unpleasant experience,’’ he left. In May 2006 he was named pastor of St. Margaret Mary, a suburban parish about 12 miles from Boston.

There Coyne seemed to thrive. John Barrett, a member of the parish council, said Mass attendance and participation in religious education classes increased under Coyne, whom he called “a wonderful person, a fantastic pastor, a gifted preacher, and a man of deep concern and deep faith.’’

“I think universally we are heartbroken to lose him,’’ he said.

Last year Coyne started a blog called “Let Us Walk Together: Thoughts of a Catholic Pastor,’’ which reflects the sermons, meditations, and playful musings of an energetic parish priest. One post agonized about the sudden death of a friend’s daughter and mother of four children; another meditated on the “guests’’ filling the parish pews at Christmastime, while still another celebrated the annual summer reopening of Bill’s Pizza in Old Orchard Beach, Maine. “O rapture! O joy!’’ he wrote.

Correction: The headline and photo caption for this story have been revised because of editing errors that misstated the Rev. Christopher J. Coyne's new role in the Indianapolis archdiocese, and also mischaracterized Archbishop Daniel M. Buechlein's status. Coyne will be an auxiliary bishop in Indianapolis; Buechlein has not retired and remains the archbishop there.