A treasured preserve for early birds

Hardwick residents start their commutes earlier than others in the state. A small price, they say, for peace. 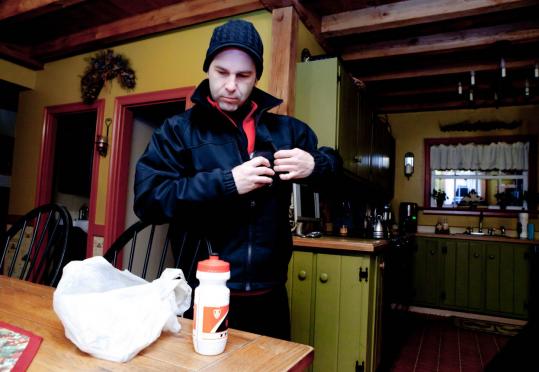 It is still dark out when Dave Noel, a Web designer in Framingham, begins his commute from Hardwick. (Matthew Cavanaugh for The Boston Globe)
By Peter Schworm and Matt Carroll Globe Staff / January 15, 2011

HARDWICK — Dawn is still many snooze cycles away when Dave Noel greets the day. He gets ready on tiptoes, so that his wife and kids can sleep until a more civilized hour, and by 5:30 a.m. is out the door and on the long road to work in Framingham.

Even at that hour, Noel has plenty of company. In this pastoral town just east of the Quabbin Reservoir, nearly half of all commuters leave home before 7 a.m. — giving it the distinction of having a higher percentage of early-rising commuters than any other municipality in the state, according to new census figures.

Like Noel, a 41-year-old senior Web designer at Staples who grew up in a small Massachusetts town and was drawn to Hardwick’s close-knit charms five years ago, many face hour-plus treks to work — to Amherst, Springfield, Worcester, and beyond. That means morning comes early.

“It is a sleepy town,’’ Noel quipped.

Residents of Hardwick, who number 2,673, expressed little surprise at the town’s status. A former mill town that today has little commerce, Hardwick is a picturesque retreat far from the Greater Boston bustle, and residents speak lovingly of its subdued pace and faraway feel.

That small-town solitude comes with a trade-off. Jobs are far-flung, highways well-removed, and commutes long. But for residents, most of whom grew up in Hardwick or other small towns and feel at home in them, the serenity and scenery are well worth the sacrifice.

So while workers in Greater Boston swat at the snooze bar or sip morning coffee at the kitchen table, 48 percent of commuters in Hardwick shake off sleep, fill up thermoses, and hit the road.

“It’s a conscious choice,’’ said Ed Hood, who leaves before 7 a.m. to drive to his job at Old Sturbridge Village. “I do the drive every day and am still struck by how beautiful it is.’’

Likewise, Hardwick’s neighbors are no strangers to the dawn. In Brimfield, just south of the Massachusetts Turnpike, 43 percent of workers report leaving before 7 a.m. To the north, Barre, Hubbardston, and Ashburnham post similar numbers.

“Everything’s an hour,’’ said Chris Campbell, a 45-year-old nurse from Barre, as she picked up a fresh loaf of bread yesterday morning at Rose32 Bread, a popular Hardwick bakery that opens at 6 for the commuter crowd. “But to live in the country, it’s well worth it.’’

In contrast, commuters closer to Boston, particularly in the wealthiest towns, can afford some extra shut-eye. In Weston and Wellesley, just 13 percent of workers leave home before 7 a.m. In Newton and Brookline, 11 percent do, according to estimates from the Census Bureau’s American Community Survey, which was taken from 2005 through 2009 and released last month. The survey calculated the percentages only for towns with at least 500 commuters.

Amherst and Oak Bluffs, where many residents work locally, have even fewer early commuters.

In Hardwick, few have that luxury. Abbie White, for instance, leaves around 7 for her job in Worcester. The 27-mile commute takes about 48 minutes, a bit longer when a school bus slows her down.

White, a 50-year-old who works at Worcester Polytechnic Institute, gets up around 5:30, giving her time to get in some exercise before she leaves at 6:45. At least in theory.

“Usually I wind up on the laptop instead,’’ she said with a chuckle.

On an early morning this week, a steady flow of pickups and sport utility vehicles headed south from Hardwick and neighboring Ware between 6 and 7 a.m., winding along Route 32 toward the turnpike. In town, a town green surrounded by expanses of hills, woods, and open fields, smoke puffed from farmhouse chimneys, and snow-glazed cars warmed up in driveways. At Cumberland Farms, people hustled inside to grab coffee for the road.

Barbara Page, like a number of Hardwick residents, works at Quabbin Regional Middle School, about 9 miles northeast in Barre. It’s an easy drive, she said. The hard part is waking up for it, so she can be out of the house well before 7.

“I wish school started later,’’ she lamented. “But I don’t think it’s in the cards.’’

Megan McDonough is among the slight majority of Hardwick residents who doesn’t leave the house before 7 a.m. But that’s only because she works out of her home as a corporate trainer. She’s typically up at 5 and quickly on the computer.

McDonough, 47, calls Hardwick “God’s country’’ and says the town’s early-rising status is testament to residents’ deep affection for it. She said a good number of residents have found professions that enable them to work at home, so they can enjoy the seclusion without spending so much time driving away from it.

“Why live in a beautiful place like this and spend three hours a day traveling?’’ she asked, recalling her former 90-minute commute to Billerica.

While Hardwick feels remote, many say, it’s actually within striking distance of a surprising number of good-sized communities. They describe the town as an attractive mix of townies and newcomers, professionals and tradesmen, who share an affection for small-town life.

“It’s a nice place to come home to,’’ said Cindy Mitchell, who owns Rose32 Bread with her husband.

In his five years working in Framingham, Noel has overhauled his commute. He used to drive a gas-guzzler on the turnpike, spending $80 a month in tolls and $70 on gas every four days. Now he drives a Mini Cooper on back roads and contends with speed traps.

Noel leaves the house in sweats at 5:30 and drives straight to the gym near his office. He works out, then arrives at work around 8. To avoid the evening traffic crunch, he tries to leave work before 5, often rushing home to coach soccer or go for a bike ride.

But in the early morning, there’s a quiet clarity Noel has come to cherish.

“It’s a different world that early,’’ he said.