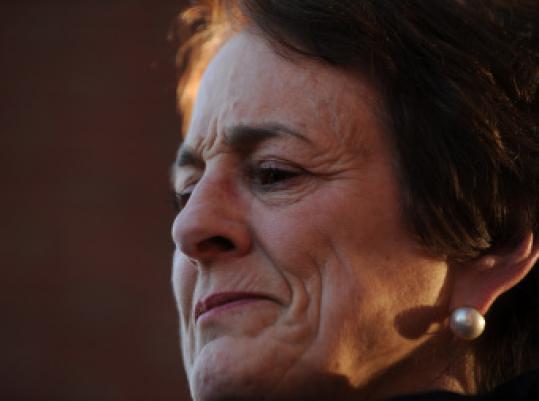 Patrice Tierney had hoped to get only probation for her role in falsifying her brother’s tax returns. (Essdras M Suarez/Globe Staff)
By Stephanie Ebbert Globe Staff / January 14, 2011

A federal judge yesterday sentenced Patrice Tierney, the wife of US Representative John F. Tierney, to a month in prison followed by five months house arrest, rejecting her earlier plea deal with prosecutors and insisting that she face a prison term like any other tax offender.

“I cannot excuse a violation of the law of this severity,’’ US District Judge William G. Young said yesterday in ordering prison time that prosecutors had not requested. “You must obey the tax laws. There must be an actual sanction.’’

Patrice Tierney and the congressman, who accompanied her at US District Court in South Boston yesterday, both seemed caught off guard by the sentence.

As part of an agreement with prosecutors, Patrice Tierney, 60, had pleaded guilty in October to four counts of aiding and abetting the filing of false tax returns for her brother, a federal fugitive who has been indicted on charges of illegal gambling and money laundering. Prosecutors had recommended she receive 90 days house arrest plus two years probation.

But Young had warned Tierney in Octo ber that his sentencing might not match the plea deal and that, by pleading guilty, she was accepting responsibility for the crime and the possibility of a heavier sentence.

Yesterday, her lawyer told the judge that Tierney was a good person who made a mistake.

“This isn’t a mistake,’’ Young said from the bench. “People aren’t guilty of tax crimes because they make mistakes.’’

She could have received up to six months in prison, he said.

Young’s stern words marked the second time in a week that someone with political connections was reminded not to expect special treatment in the courts. Last week, US District Judge Douglas P. Woodlock rejected Dianne Wilkerson’s pleas for mercy and sentenced the former state senator to 3 1/2 years in prison for taking bribes, saying Massachusetts politicians engage in political corruption without fear of serious consequences.

Though Wilkerson, too, had accepted responsibility for her crimes, she went on to suggest after the sentencing that the government was corrupt for targeting her.

Yesterday, Young expressly prohibited Tierney from “disparaging the facts of your conviction,’’ noting that she had already agreed to plead guilty.

“She said, ‘I take total responsibility for my actions,’ and then later that same day, it was reported that she said, ‘I was duped by my brother,’ ’’ Young said. “If one is duped, they are not guilty of this crime.’’

Outside the courthouse yesterday, Tierney’s lawyer, Donald K. Stern, said his client recognized that she was pleading guilty and disputed the judge’s claim that she had ever talked about being duped. He also acknowledged that Tierney had profited from her brother’s accounts, taking some $20,000 to $30,000 a year in gifts.

Law enforcement officials said her brother, Robert Eremian, ran a large-scale illegal gambling business from the early 1980s through the beginning of 2010. State Police raided his Lynnfield office in 1996, prompting Eremian to move the business’s headquarters to Antigua.

Patrice Tierney began overseeing her brother’s Massachusetts affairs after he went to Antigua and believed he was being paid legitimate commissions as a consultant, her lawyer said.

Between 2003 and 2009, prosecutors charged, she paid bills for his three children and their mother, balanced the bank account, and provided information to his tax preparer, resulting in false tax filings. Instead of commissions, prosecutors say, the bank account collected more than $7 million in illegal gambling profits.

In sentencing Tierney yesterday, Young rebuffed the plea deal and challenged assistant US Attorney Fred M. Wyshak Jr. to explain why he was not requesting prison time — as the government often does to set an example for other taxpayers who are expected to comply with the law.

The prosecutor noted that, in addition to the fact that this was Tierney’s first offense, she is the wife of a congressman, meaning that her conviction drew media attention and shame of its own.

“You’re saying that because she’s married to a congressman — who’s not implicated in this in any way, shape, or form — this generates some media interest?’’ Young said. “And because of that, you’re saying the shame and general public awareness warrants probation?’’

“In this particular case, yes, that is general deterrence,’’ Wyshak replied.

The judge disagreed. “She should get the sentence that anyone else would get,’’ Young said.

Tierney’s conviction in October became an issue in the days before last November’s election, when her husband, a Salem Democrat who has represented the Sixth Congressional District for 14 years, was forced to answer questions about it. Ultimately, the congressman easily fended off Republican challenger Bill Hudak.

Patrice Tierney was ordered to report to the Bureau of Prisons on Feb. 28 for her 30-day sentence, at a prison yet to be determined.

After she is freed, she must serve two years of supervised release, with the first five months under house arrest. The judge said that during that time, Tierney would be allowed to leave home to work, attend religious services, and care for her ailing mother.

Stern said he is not expecting to appeal because the sentence is within the legal guidelines.

Tierney would not speak with reporters after court yesterday but issued a statement last night through a spokeswoman. She apologized for “the mistakes I made while helping my family.’’