Wellesley Square, which long remained vibrant amid the recession, begins to show cracks as shops go out of business 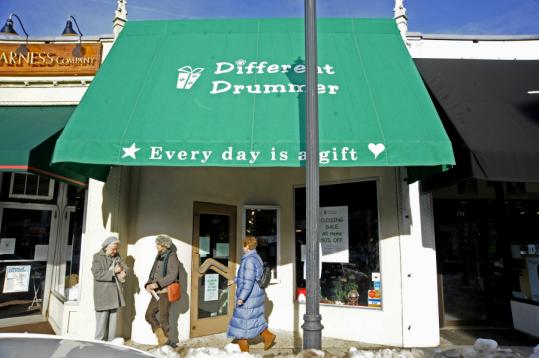 Wellesley Square's bustling retail scene has shown signs of trouble in recent months, with the list of shops closing their doors including the Different Drummer. (Jon Chase for The Boston Globe)
By Kathleen Pierce Globe Correspondent / January 13, 2011

After seven years in Wellesley Square, preppy outfitter Trappings sold its last paisley vest on New Year’s Eve. Jennifer Casner, the shop’s owner, was unambiguous as to why she called it quits: “It was a business decision; the store was not making money.’’

It was a very different climate when Casner first flung open the doors to her shop at 31 Central St. in 2004. Sales of her cheerful bags, belts, and baubles were brisk.

“It was bright, fun, preppy things you didn’t need, but when you saw it, you’d have to have it,’’ she recalled.

But when her customers’ discretionary spending accounts started to dry up along with the economy, her business headed south. “People were not excited about new colors, it was more about ‘When is it going on sale?’ ’’

In the past few weeks a string of businesses along the stretch of Route 135 have closed or announced they will close, including Ann Taylor, Clarks, the Body Shop, and Different Drummer, leaving a gap in this affluent downtown that has been shielded until now from closeouts and liquidation sales.

After Christmas, a sign went up at the front counter at Ann Taylor instructing shoppers to visit its Natick and Chestnut Hill stores, and employees confirmed the longtime women’s retailer would close at the end of this month. A company spokeswoman declined to comment.

“I think it’s terrible,’’ said Linda Flueckiger, a Needham resident who has shopped in Wellesley for the last decade. “It’s great because you can run in and grab an outfit quickly; you don’t have to go to the mall.’’

A block away, Clarks also will close at the end of the month, ending a five-year run in Wellesley Square. The British shoe retailer opened locations at the Natick Collection three years ago, and at Legacy Place in Dedham in August 2009.

“Based on our annual portfolio review, we decided to exercise our option to terminate our lease and close this underperforming store,’’ said Joanna Linder, the chain’s director of retail marketing, in an e-mail.

In November, the Body Shop closed after more than a decade in business. The hand-written sign in the window reads: “Officially closed, visit us in Natick.’’

The strength of malls that offer free parking and access to discount stores have pulled chains away from Central Street, but small boutiques like Trappings that make Wellesley a vibrant shopping district have also suffered.

As an independent retailer, Casner said, she needed to support the small designers whose products she carried, and could not “compete with a Bloomingdale’s or the Internet’’ by offering steep discounts.

Online sales cut into business this holiday season at the London Harness Co., a leather goods and luggage store on Central Street since the 1950s. The store is not closing, but foot traffic has been off by 30 percent over the past few years.

“There are more deals online. People just want to buy something and not deal with the traffic and the people,’’ said Demian Wendrow, director of operations for the store. “We have customers tell us, ‘I saw it online for less.’ Everyone’s doing free shipping; it’s become extremely more competitive.’’

The recession is not the only reasons shops are shuttering. Wellesley merchants have varied reasons for walking away.

Different Drummer owner Amy Law says she’s ready for the next chapter in her life, and her decision to close the well-loved gift shop had nothing do to with the economic downturn.

“After 15 years, I’ve decided to do something else,’’ said Law. “The customers are like family. When someone gets married, or has a birthday they come in looking for gifts. . . It’s just special.’’

That tight-knit bond was palpable on Different Drummer’s final day, Dec. 31, when regulars popped in to say farewell, scoop up earrings and ornaments, and shed a few tears.

“It’s very sad to see stores like this close. I love the little shops in this town,’’ said Pam Donahue, who stopped by with her three children. Her 7-year-old daughter, Hayley, said, “I feel very upset because this is my favorite store.’’

O’Brien acknowledged there has been more turnover downtown over the last three years, and said “people are shopping in general less than they did.’’

She said she is sorry to see “longtime businesses that have been assets in the community go, but we look forward to new businesses.’’

The four-year-old Linden Square, a seven-minute walk from downtown, is humming along. Ditto the stretch of shops on Church and Washington streets, a block from Central Street, O’Brien said.

Rob Skolnick, owner of E.A. Davis, a 107-year-old Wellesley institution on the Washington Street section of Route 16, said “customers will stand by you, as long as you have something they are looking for.’’

He carries high-end designers such as Barbour, a British clothing line for men, and what he calls “investment-type clothing’’ such as Lilly Pulitzer. But there is another reason E.A. Davis continues to do well and it has nothing to do with balance sheets.

The shop, which started out as a dry goods store, is “like going to a neighbor’s house. Friendliness is an important characteristic,’’ Skolnick said.

Longtime merchants say the spate of closures is part of the ebb and flow of commerce, and this downtown is still vital.

“Wellesley is not going to disappear. We are stronger than most downtown business districts,’’ said Steven Varriale, owner of O’Neil Jewelers, a Central Street diamond seller for more than 80 years. “It’s surprising that there hasn’t been more turnover, given the economy. It shows you the strength of the businesses here.’’

But those who have recently pulled out of the square, such as Casner at Trappings, are wary that the worst is yet to come: “I have always prided myself in owning a business in Wellesley, I wouldn’t want to be anywhere else. But If Wellesley is emptying out, what does that mean for other towns?’’