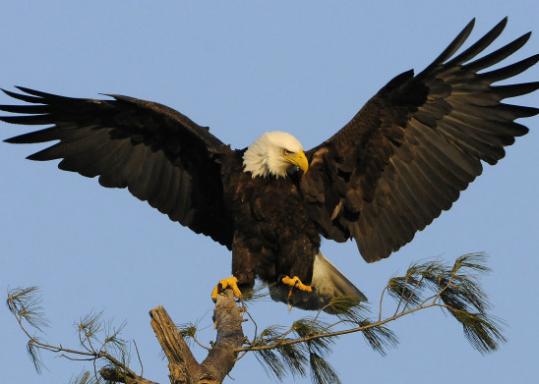 The upward trend for American bald eagles on the Merrimack River was confirmed during the state’s annual survey of wintering bald eagles last Friday.

Volunteers and spotters from the state’s Division of Fisheries and Wildlife counted 11 eagles on the river. While the state does not specifically follow the trends on the Merrimack, wildlife assistant director Tom French said he could not recall a higher number.

“It’s probably safe to say it’s the most we’ve had’’ during the one-day tally, said French, who coordinated the count. He noted that there have been accounts of greater numbers — as many as 15 or 16 — spotted on the river in February. But that’s likely a reflection of more eagles coming south from Canada and northern Maine as lakes and rivers freeze over and food sources become scarce.

Wildlife officials believe that the number of eagles is a reflection of the improved condition of rivers and other bodies of water where the eagles will hunt or scavenge for food.

“It wasn’t too many years ago that seeing eagles was unheard of in this part of the state,’’ said John Sheedy, a biologist for the division who helped conduct the Merrimack River count. “There have been off-and-on sightings up on the Merrimack for years, but never anything like the winter population we’ve seen in the last few.’’

One significant change for the Merrimack River is the number of nests along its banks.

Statewide, the number set a new record with 102 eagles identified. The one-day count is part of a national effort to track the recovery of the bald eagle, which was taken off the federal list of endangered and threatened species in 2007.

“Our numbers show a steady and positive upward trend,’’ said Mary Griffin, commissioner of the state Department of Fish and Game, who assisted in the count. “We identified 54 in 2000, and over the years it’s steadily increased. There’s a clear upward trend, which shows the success of our restoration efforts.’’

Eagles were largely absent from the state from the early 1900s through the 1980s. A nest seen on Cape Cod in 1905 was the last noted for 84 years, until habitat restoration and the release of young eagles in the Quabbin Reservoir in the 1980s led to a new nest found in 1989.

Most eagles in the count were at the Quabbin Reservoir (33) and along the (18). French said he has long felt, given its habitat makeup, that the Merrimack River would be the “next frontier’’ for the bald eagle in Massachusetts.