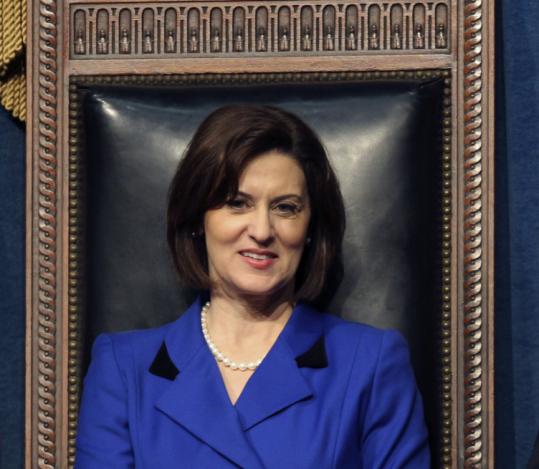 Vicki Kennedy’s latest — and she says final — declaration this week that she will not run for Senate next year sets off a scramble among Democrats to find a candidate who can mount a serious challenge to Senator Scott Brown, the Republican whose election a year ago reshaped state and national politics.

Although Kennedy said last summer that she didn’t want the job her husband held for decades, speculation continued within Democratic circles. Some party leaders and analysts believed she was the strongest candidate they could field against Brown, a popular and well-funded incumbent.

But this week Kennedy, in an interview with a Globe columnist and in telephone calls to Democratic leaders including Governor Deval Patrick, ruled out a run.

“She was a big factor for everyone who is considering running,’’ said Michael Shea, a veteran Democratic media consultant whose clients include Representative Michael Capuano of Somerville, a potential Senate candidate who placed second to Attorney General Martha Coakley in the 2009 Democratic primary in the special election for the seat. “There were a lot of people waiting to see what she was going to do.’’

With Kennedy out, the early jockeying for the Democratic nomination to take on Brown next year includes at least two members of Congress, a wealthy businessman, and a founder of City Year. Depending on who ends up making a run, Democrats could see a divisive and expensive primary.

Capuano, whom Kennedy also called to say she would not run, confirmed yesterday that he was taking a hard look at mounting a run against Brown and would decide by late spring or early summer. He would not comment when asked about his conversation with Kennedy.

Another member of the state’s all-Democrat House delegation who could launch a bid for Senate is Stephen F. Lynch of South Boston, who flirted with running in 2009. His press aide said he was not available for comment yesterday.

Others considering a run are Alan Khazei, a cofounder of the service organization City Year, who ran third in the four-way 2009 Democratic primary. Khazei acknowledged in an interview that he was looking at it, but had made no final decision

Robert Pozen, a wealthy Boston financier who is a Democrat but served as a top economic aide to former governor Mitt Romney, is also considered a potential candidate. Pozen, who has never run for office, could not be reached for comment.

Still, Kennedy’s decision is an early blow to Democratic hopes of removing Brown from the seat that her late husband, Edward M. Kennedy, held for decades. Many political analysts and Democratic party leaders believe she would have broad appeal to Massachusetts voters, as well as the campaign skills and strong fund-raising capabilities to make a strong run at Brown.

A minor figure in the state Legislature before he erupted onto the national stage, Brown remains perhaps the most popular elected official in Massachusetts, polls show. He also has a huge fund-raising advantage over any Democratic opponent, with $6 million in his account and a national fund-raising base that could more than double his kitty.

“Things are shaping up pretty well for Scott at this point,’’ said Richard R. Tisei, the former state Senate minority leader and the Republican candidate for lieutenant governor last year.

Tisei noted that Kennedy joins two other prominent Democrats — Patrick and former US representative Martin T. Meehan, both seen as potentially strong contenders — in ruling out a Senate run. Patrick is fresh off a strong reelection victory, while Meehan, now the chancellor of the University of Massachusetts Lowell, has nearly $5 million in his political account.

“The Democrats’ A-team has taken itself out of contention,’’ Tisei said.

Other big-name potential challengers remain, however. Capuano, for example, struggled to find the right message in the 2009 race but is steeped in gritty urban politics as the long-time mayor of Somerville and has appeal to the liberal party base outside his district.

Shea, the Democratic consultant, said a campaign against Brown may appear daunting at first, but Democrats have some advantages they didn’t have when the Republican rode a late wave of GOP support nationally to defeat Coakley last January.

“This is a state that Obama will win with double digits,’’ Shea said, arguing that many more Democrats will vote in 2012. “The last two elections, when Obama won and when Patrick won, turnout was key. When Democrats come out in big numbers, it can stop any tidal waves.’’

Eric Fehrnstrom, a media adviser to Brown credited with creating the heralded TV ad showing the candidate driving his pickup truck across the state, said speculation about potential challengers is premature.

“Scott Brown admires Vicki Kennedy. He respects the Kennedy family’s long record of service and sacrifice on behalf of the country,’’ Fehrnstrom said. “But it’s still too early to be speculating on the 2012 race and who’s going to run or not. That’s mostly a press parlor game at this point.’’

He added, “Scott Brown can best help himself by focusing on his job, which is exactly what he is doing.’’