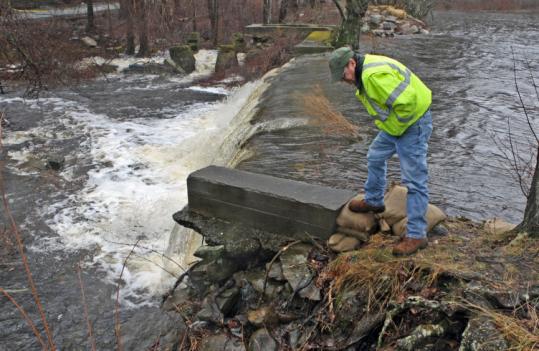 One hundred major municipal dams across the state are in poor condition and could cause significant property damage if they failed, the state auditor’s office reported yesterday, renewing calls for stricter oversight.

The two-year investigation concluded that the state’s aging and neglected stock of dams poses a “significant threat to public safety’’ and needs an estimated $60 million in repairs. More than one in five potentially hazardous public dams have substantial structural deficiencies, the report found.

Auditor A. Joseph DeNucci called on the Legislature to establish a no-interest loan program to help communities pay for the repairs.

“These are difficult times, but some prudent budgeting and financing now could avert a major crisis in the future,’’ he said in a statement that accompanied the report. He noted that delaying repairs would sharply increase their cost.

Dam specialists, who have criticized town and state officials for failing to maintain dams, said the report underlines the scope of the problem and the need for swift action.

“The situation is getting worse and worse,’’ said Brian Graber, director of river restoration for American Rivers, a national conservation group. “These failures are becoming more common.’’

In February, residents in Freetown were urged to evacuate when rising water levels threatened to breach a dilapidated dam, which has since been torn down. The next month, a section of a Canton dam collapsed, flooding an apartment complex and forcing street closures.

“We’ve seen what can happen,’’ said Alison Bowden, freshwater program director at the Nature Conservancy in Boston. “Somehow, we need to make some decisions to deal with this, because it’s a pretty big problem.’’

In the report, state inspectors rated six dams as unsafe, the lowest category of safety. Two are in Foxborough; the others are in Athol, Bolton, Danvers, and Dudley. Sixteen of the deficient dams assist in flood control for the surrounding areas.

Cities and towns are responsible for maintaining their dams, with state oversight. A spokeswoman for the state’s Office of Dam Safety said yesterday that repairs on many of the dams have begun or are in the works.

“We’re well aware of the problem,’’ said Wendy Fox. “We are paying close attention to the dams in the worst condition.’’

A Globe story in March found that 60 high-hazard dams were in poor condition, and half of those had not been inspected in the previous two years, as required under state law. Many privately owned dams had not been maintained for years.

Marc Pacheco, a Taunton state senator who has called attention to the need for dam repairs, said the fragile condition of many dams threatens public safety and should be a pressing concern to government officials. Budget-crunched cities and towns often defer repairs, he said, to finance more immediate priorities.

“People should be very concerned about it,’’ he said.

Pacheco said he would file legislation this month that would establish a repair fund, identify dams that should be removed, and tighten state oversight.

The report called on regulators to rank the 100 dams in order of risk to prioritize repairs.

“We are going to peck away at the ones that need the most work,’’ said Lisa A. Wong, the mayor of Fitchburg, which has six dams in poor condition. “We are not going to let them fail.’’

Wong said some of the dams would probably be removed, a solution supported by many environmental groups.

“Many of these dams were built for industry decades or centuries ago and are no longer used for that purpose,’’ Graber said. “The most cost-effective and permanent way to deal with unsafe dams is to remove them.’’

The report found that most towns with deficient dams had not made emergency plans in case of a breach, and one in four communities said they had “no idea of what to do in an emergency.’’ Among the 37 largest dams, eight had emergency plans on file with state regulators.