Ukrainian to be deported for selling ivory 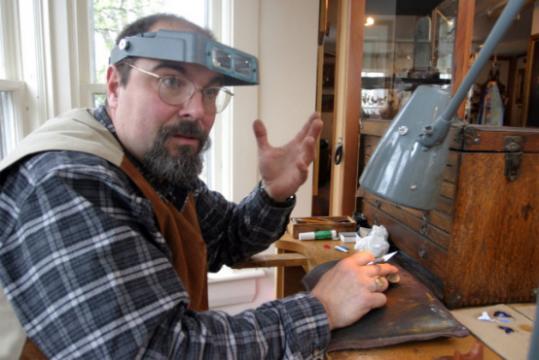 A federal judge in Boston yesterday ordered a 39-year-old man from Ukraine to be deported after he admitted to selling sperm whale teeth to a scrimshaw artist in Nantucket.

Andriy Mikhalyov, who spent the past nine months in a federal prison, was sentenced to time served, as part of a plea agreement in which he acknowledged his role in smuggling large amounts of the ivory teeth into the United States.

Importing sperm whale ivory was banned by the Marine Mammal Protection Act of 1972.

Mikhalyov was charged with conspiring with Charles Manghis, 54, a commercial scrimshaw artist from Nantucket, who was convicted last year in US District Court of six felony counts of smuggling wildlife, one count of conspiracy to smuggle wildlife, and two counts of lying to federal agents.

“One cannot understate the importance that our endangered species laws play in protecting our coastline and its resources,’’ US Attorney Carmen M. Ortiz said in a statement. “Our coast is home to some of the most endangered marine mammal species in the world, and we will continue to aggressively and proactively investigate anyone who threatens or jeopardizes their existence.’’

Mikhalyov, who advertised the teeth online, allegedly earned thousands of dollars from selling the sperm whale ivory to Manghis between 2002 and 2005. Manghis etched designs on the teeth, a folk art that goes back to Nantucket’s whaling days.

Manghis, who has yet to be sentenced, earned thousands of dollars for some of his etchings and had been commissioned to carve the presidential seal into whale teeth for presidents George H.W. Bush and George W. Bush.

“I think this was a very fair resolution to a difficult situation, when you measure his level of culpability against the fact that he was drawn here and has been in custody for nine months,’’ he said.

Cunha said federal agents lured Mikhalyov to the United States with the promise of a job as a translator of Russian and Ukrainian. He was arrested in March in Seattle, when he stepped off the plane.

Cunha said Mikhalyov didn’t know it was illegal when he began selling whale teeth about a decade ago. He said no whales were harmed as a result of his client’s sales and that all of the teeth had come from the former Soviet Union’s whaling trade and were bought in Odessa.

“The problem was a lack of documentation,’’ Cunha said. “He wasn’t hunting endangered species. These were pieces that were already extant.’’

He said he didn’t know how much money Mikhalyov earned from the illegal trade, but he said it was a relatively small amount.

Cunha said Mikhalyov learned after several years in the business that what he was doing was illegal.

As part of Judge Nancy Gertner’s order, Mikhalyov will not be allowed to reenter the United States for 10 years. Cunha said Mikhalyov would be deported from Boston in the next few days.