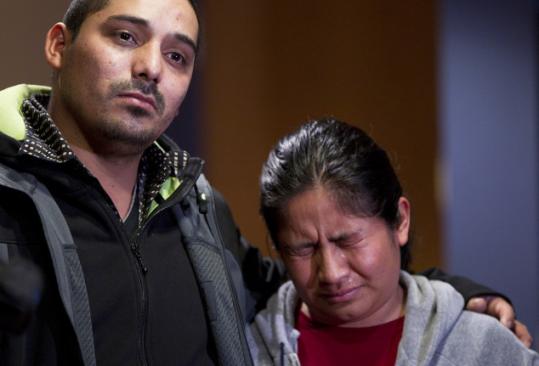 Salvador and Jovita, who withheld their last names, are looking for information on the motorist who hit their 6-year-old daughter, Melissa, in Allston. (Yoon S. Byn/ Globe Staff)
By John M. Guilfoil Globe Staff / January 11, 2011

The parents of a young girl critically injured in a hit-and-run accident on Saturday in Allston stood at a podium yesterday in a playroom at Children’s Hospital Boston and pleaded for someone with information to come forward.

“We are asking with our hearts to please give information if you have it,’’ said the father, Salvador, who did not wish to give his family’s last name. “The person who hit my daughter did not hit an animal; they hit a person.’’

Boston police are looking for a silver Jeep Grand Cherokee with front-end and possible headlight damage that struck 6-year-old Melissa around 8:20 p.m. Saturday.

She was walking with her parents at Cambridge Street and Harvard Avenue.

Jovita said nothing and wept as she clutched her husband.

Melissa had been holding hands with Jovita at the time, but the girl was slightly behind her mother.

When the Jeep careered toward them, it missed the parents and hit the child, sending her body flying across the pavement.

Dr. Robert Truog, the physician attending to Melissa, said she had a broken pelvis and bleeding in a lung and kidney.

“But the most serious injuries are certainly the ones to her brain,’’ Truog said. “She has a number of areas of her brain where there’s bleeding.

“We hope that she’s going to make a full recovery, but right now it’s really too early to be sure. With traumatic brain injury like this it’s impossible to know for sure this early.’’

Salvador encouraged anyone with information about the accident to “put your hand over your heart, think about it, and call the Boston Police Department.’’

“If a person has an immigration status, it’s something that the Boston Police Department is not interested in,’’ he said. “We will not ask you about that. All we need is information about this specific incident.’’

Ruiz could not say how fast the Jeep was going when it hit Melissa.

He said detectives were reviewing surveillance footage from nearby buildings.