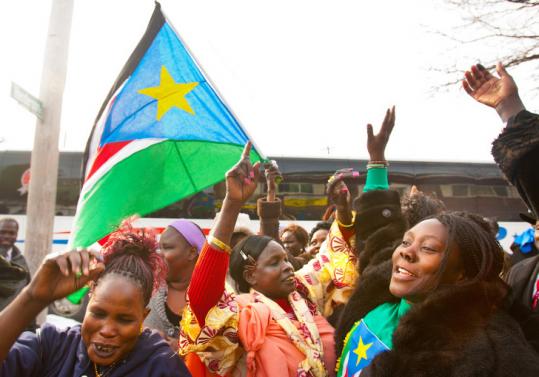 ARLINGTON — Bona Nyapir, 56, has been fighting for southern Sudan’s freedom since he was 17, when he was wounded in the leg while battling government militia. Yesterday, Nyapir, who eventually fled to the United States, became one of the first southern Sudanese to vote here in the weeklong referendum that will decide whether his war-ravaged homeland becomes an independent nation.

“We are voting for the young generation — so there will be no more war,’’ said Nyapir, who lives in Portland, Maine.

Busloads of southern Sudanese refugees from around the Northeast yesterday poured into a Sudanese community center in Arlington, one of eight designated sites across the country where Sudanese can cast ballots. The referendum marked the first time south Sudanese have a voice in their government.

Crowds outside the South Sudanese Community Center cheered and danced in celebration. Most voters here seemed passionately in favor of independence, rather than continuing the affiliation with northern Sudan.

“It’s the moment we have been waiting for,’’ said Tichot Yei, 36, of South Portland, Maine, whose father and two brothers were killed in the decades-long civil war that has claimed 2 million lives and forced millions more to flee their country.

“It means everything,’’ said Franco Majok of Lynn, who fled southern Sudan in 1983 when militiamen on horses and donkeys overran his village. “I can’t believe it’s really happening. In my lifetime, I didn’t think we would ever get where we are.’’

About 300 southern Sudanese refugees live in the Boston area, according to Susan Winship, founder of the Sudanese Education Fund, which raised funds to open the community center and provide educational and other support to newcomers.

Some of them were once Lost Boys, Sudanese war orphans who came to this country a decade ago after fleeing to refugee camps in Ethiopia and Kenya. Many had lived in mud huts and struggled to adjust in the United States. Now they have families and jobs.

“We had probably 200 Lost Boys, and Girls, in Boston,’’ said Winship. “Many of them have gone home, gotten married, and are bringing their wives to Boston. They’re all voting, definitely. This may not be the last leg of their journey, but it is the most empowering.’’

Winship said that while “the majority want separation, some do not. Some are afraid that with separation there will be civil wars between the tribes in the South. ’’

The ballots included both words and symbols, for those voters who cannot read. Clasped hands represented unity and an open hand represented secession. Voters were instructed to put a thumbprint in a circle next to their choice.

If the referendum passes, southern Sudan will break from the Arab leaders who have dominated it for years. A declaration of independence would be signed in July and the country would officially secede.

For secession to prevail, 60 percent of 3.9 million registered voters must take part and a majority must support independence. Voting will take place until Friday so that southern Sudanese scattered across the world will have a chance to take part.

US Senator John F. Kerry, in Juba in southern Sudan to monitor the voting, called the referendum a “historic occasion for the people of southern Sudan.’’

“I am extraordinarily honored and privileged to be here to share this moment,’’ said Kerry, who chairs the Senate Foreign Relations Committee, in a statement. “And what we have seen thus far has been magnificent. I saw long lines of people waiting for hours but reveling in the privilege of voting for their freedom. When I mentioned to some voters the need to be patient, they said, ‘We have waited 55 years, we can wait a few more hours.’ ’’

At the urging of the US government, the northern and southern Sudanese signed a peace treaty in 2005 that led to the vote.

Violence broke out in the country in the days leading up to the vote and at least a half dozen people were killed as rebel groups apparently tried to disrupt the election.

The violence was all too familiar to Sudanese families here.

“Death is too near to you. You miss it by chance,’’ said Bolbol Rueibol, 57, of South Portland, who voted for independence yesterday in Arlington. “It is horrible — no food, diseases that kill a lot of people.’’

“People don’t believe that we can have a government like everybody [else]. But today is the final journey,’’ Rueibol said. “We will be a nation finally. Even if you die tonight after voting, and then the goal is fulfilled for a new nation, you will be very happy.’’

Even though she was only 5 when her family left southern Sudan, Akur Leek of Manchester, N.H., wanted to take part in the election.

“As a little girl, I used to go to elementary school and I had to read the Islamic bible,’’ said Leek, 22, whose father is a Christian reverend. “Otherwise, I couldn’t go to school.’’

Her father, she said, urged her to vote for independence.

“Although we live here and have a good life, it doesn’t mean my family forgets where they were born and raised.

“My life is perfect but Sudan people are dying and mistreated.’’

She said she planned to visit Sudan last October, but could not bring herself to do so because of the “horrible stories’’ she heard.

“Now I will go confidently, ’’ she said.