From a shelter to a place called home

City figures show Boston’s 2010 homeless population is down 4 percent from the previous year with a 30 percent drop in the past five years. 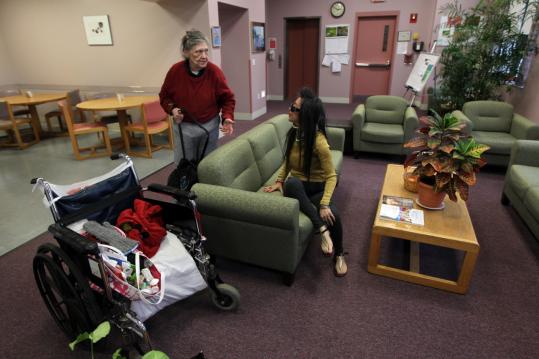 At first glance, the fourth floor of Pine Street Inn’s Women’s Inn looks like a college dorm, with its fluorescent lights, mini refrigerators, and a chore schedule tacked to the wall.

But this is not a dorm. It is a home for 10 women, most of whom have spent decades living on the street and shuffling in and out of homeless shelters. It also represents the latest development in Pine Street’s long-term efforts to combat homelessness: a shifting emphasis from emergency shelter to long-term housing.

The core mission of the nonprofit remains what it has been for decades: to offer men and women a safe alternative to living on the streets. But Pine Street, Boston’s largest homeless shelter, is now closing shelter space to make room for permanent homes.“I know. It’s totally counterintuitive,’’ said Lyndia Downie, the executive director, given the sour economy and increased number of families using shelters. “But because we’ve freed up capacity, we’re able to meet demand.’’

There are 7,251 homeless people in Boston, according to the city’s 2010 figures. That number represents a 4 percent decrease in homeless men, women, and children from last year, and a 30 percent drop in the past five years.

About $9,500 in emergency care expenses is saved with each person who is given a home, money that is redirected toward long-term housing options, according to the state.

The reason, Downie said, is that chronically homeless men and women represent the smallest segment of the homeless population but use the most resources and tend to spend the most time living in shelters. Moving them into a home frees up a shelter bed for people with temporary housing crises. But finding housing for the chronic cases is challenging, because mental health and substance abuse problems are often involved, as well as criminal records.

At Pine Street Inn’s long-term housing for the chronically homeless, there are no curfews. No lengthy applications. No drug screenings. No mental health checks. Those things come later; housing comes first.

Administrators describe the 10 women at the Harrison Avenue facility as strong yet emotionally fragile women who come from diverse backgrounds. A fourth-floor resident is just as likely to strike up a conversation with guests about her time carrying picket signs on the streets of New York City during the ’60s as she is about her time as a Broadway actress or being a lawyer.

The residents are artists, pianists, and cooks. The oldest is in her 70s; the youngest in her 50s. Some receive disability payments. Some receive Social Security checks. Some have no income at all. What bonds them is that they all lived on the streets for more than five years.

“Not one of them will say they have a mental illness,’’ said Debbie Ouimette, who manages permanent and temporary housing at the women’s inn. “One woman here threatened to leave because she saw it in writing.’’

Downie said tending to someone’s emotional and medical needs after stabilizing their housing situation produces a better outcome. “When you have to fight every night for where you have to sleep, that’s all you have to think about,’’ she said, offering Stewart Thorpe as an example.

For more than a year, Thorpe, 56, has lived at one of Pine Street’s housing sites for men, called Stapleton House. But he spent more than a third of his life on the street, after leaving the Air Force and being fired from a series of factory jobs.

“When Stewart was here, he had to come and stand in line for a bed,’’ Downie said. “Now, it’s ‘What do you want? What do you need?’ instead of trying to keep him alive each night.’’

Thorpe said he wants to move into a rooming house, though he does not have to move. He can stay at Stapleton House for as long as he wants.

Thorpe has tried living alone once before, but said he could not handle the loneliness and battled depression.

Now, he thinks he could manage, thanks to the coping skills he has learned at the house, where he helps care for dogs.

When asked what he most looks forward to about living on his own again, Thorpe sheepishly responds: “I miss having a cat.’’