Brushing aside pleas for mercy, a federal judge sentenced former state Senator Dianne Wilkerson yesterday to 3 1/2 years in prison for taking $23,500 in bribes, saying too many Massachusetts politicians engage in political corruption without fear of serious consequences.

US District Judge Douglas P. Woodlock agreed with Assistant US Attorney John T. McNeil, who argued that Massachusetts politics have become so cynical that two former House speakers convicted of federal crimes — Charles F. Flaherty and Thomas M. Finneran — were “welcomed back like they were some sort of heroes’’ at State House ceremonies on Wednesday. Neither Flaherty nor Finneran was sentenced to prison.

“It’s clear the sentencing imposed for criminal conduct here and, frankly, in other industrial states, hasn’t been sufficient,’’ said Woodlock. Referring to a culture of political corruption in Massachusetts, Woodlock said, “That Gordian knot has not been cut. People go back to do it again.’’

Woodlock acknowledged the service that Wilkerson, a state senator for 16 years and the first black woman elected to that chamber, had provided to the state. He noted that he had received more than 100 letters from her supporters, including ordinary citizens and former governor Michael S. Dukakis, for whom she served as an assistant legal counsel in the 1980s.

But her 1997 federal conviction for failing to file her income taxes for two years, her repeated campaign finance violations as a senator, and other ethical lapses demonstrated she was “financially embarrassed and fiscally incontinent,’’ Woodlock said. By taking bribes in recent years, he added, she had imposed her own “Wilkerson tax’’ on the community she professed to love.

Woodlock ordered Wilkerson to turn herself in by March 11 to begin serving her prison sentence and said he would recommend she be incarcerated at the federal prison in Danbury, Conn., the closest one to her home in Boston.

Wilkerson’s lawyer, Max Stern, called the outcome of the case a “tragedy of monumental proportions.’’

“With all due respect to the judge, we are very disappointed with the sentence,’’ he said. “The judge was motivated by a need to impose harsher sentences for corrupt politicians in Massachusetts.’’ But that does not justify making an example of Wilkerson, Stern said.

Wilkerson, in a lengthy plea for mercy delivered in a composed voice, gave no specific explanation for why she accepted bribes in 2007 and 2008 from a witness secretly cooperating with the FBI and from undercover agents.

“I’m told I have problems with balance,’’ she said, referring to managing both her personal life and service to constituents. She said that she had always acted on her constituents’ behalf and that the bribes did not affect her actions.

“If it was possible to do something criminal without being criminal, that would be me,’’ she said in a courtroom packed with supporters.

After the 2 1/2-hour sentencing hearing ended, Wilkerson told a phalanx of reporters outside the courthouse that she accepted responsibility for her crimes. But she said federal prosecutors were corrupt and went after her and former Boston councilor Chuck Turner, who was convicted of accepting a $1,000 payoff in the same FBI sting, because they were outspoken politicians who challenged the status quo.

“Chuck Turner and I have always been about the same business,’’ she said. “Some in positions of power were threatened by our actions, and as a result we became targets.’’

She blasted what she called the “despicable actions of the government and its collaborators,’’ alleging that the government’s key cooperating witness, Ronald Wilburn, was a criminal who was involved in loan-sharking, money-laundering, and other crimes.

“He was the central player in a massive criminal enterprise,’’ she said.

Those allegations were never leveled during Turner’s recent federal criminal trial, at which Wilburn was a star witness.

Wilkerson can appeal her sentence, but neither she nor her lawyers would answer questions about whether they intended to do so.

US Attorney Carmen M. Ortiz, in a brief news conference outside the courthouse, rejected the comparisons with the former House speakers.

Wilkerson’s conviction on bribery charges, Ortiz said, followed her conviction for failing to pay taxes, “and she was treated lightly then,’’ avoiding prison.

Ortiz dismissed suggestions that Wilkerson was targeted for political reasons.

“The reason Ms. Wilkerson is going to go to jail for a long time is because of the actions she took,’’ Ortiz said.

Prosecutors had urged Woodlock to send her to prison for four years — two months more than the maximum recommended by the guidelines. She deserved a particularly harsh sentence, prosecutors said, because of a history of ethical lapses and law-breaking dating back two decades.

Wilkerson’s lawyers had recommended she get substantially less than the roughly three years suggested as a minimum sentence in the guidelines. They cited what they called her “extraordinary history of good works,’’ including activism for civil rights and racial justice.

Wilkerson pleaded guilty on June 3 — 18 days before her scheduled trial — to eight counts of attempted extortion.

In a scandal that rocked the State House and Boston City Hall, Wilkerson took eight cash payments in 2007 and 2008 from Wilburn, who was secretly cooperating with the FBI, and from undercover agents. The money was to secure a liquor license for a nightclub and legislation to pave the way for a commercial development in Roxbury, which she represented.

She was caught on some of 150 secret audio and video recordings saying she intended to use some of the cash at Foxwoods Resort Casino and to mount a sticker campaign after she lost a fiercely contested Democratic primary in the fall of 2008, prosecutors said.

One widely disseminated FBI surveillance picture showed Wilkerson stuffing 10 $100 bills into her bra at a restaurant near the State House.

The FBI investigation led to Turner’s arrest in November 2008, the month after Wilkerson’s. He was accused of accepting a $1,000 bribe from Wilburn. Unlike Wilkerson, he decided to go to trial.

After the high-profile trial during which Turner characterized the prosecution as political and racially motivated, the councilor was convicted in October of one count of attempted extortion and three counts of lying to FBI agents. The Boston City Council later voted to oust him. Turner is scheduled to be sentenced by Woodlock on Jan. 25.

Jonathan Saltzman can be reached at jsaltzman@globe.com. Martin Finucane of the Globe staff contributed to this report. 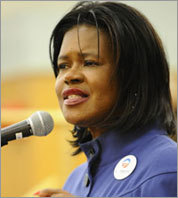 Surveillance photos from the investigation