An untimely turn in a school turnaround 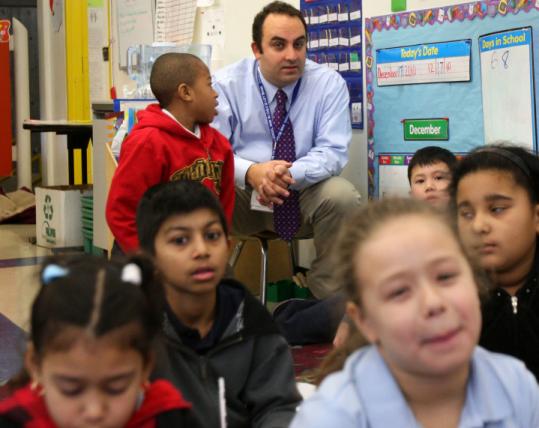 Vowing to put a fresh face at the front of nearly every classroom, the newly appointed principal of an underperforming Boston school broomed out dozens of teachers last spring and swept in talented colleagues from places he formerly worked.

To win over parents, he dispatched teachers on home visits over the summer, hosted back-to-school events, and sent students home with letters promoting the efforts to overhaul the South End’s Blackstone Elementary School.

By the time fall rolled around, Stephen Zrike appeared to be on the verge of orchestrating an elusive feat in urban education: turning a school of persistent failure into an academic success.

But then last month, Zrike, a 34-year-old rising star of the Boston public school system, abruptly walked away. He accepted a more prestigious position in Chicago’s public school system, leaving Blackstone in the lurch and Superintendent Carol R. Johnson scrambling to find a temporary replacement.

Across the country, urban school districts have been hiring “hero principals,’’ charismatic leaders with the innate ability to quickly execute fundamental changes to a school’s operations and culture and to rejuvenate underperforming schools. But Zrike’s untimely exit is raising questions about what happens to an underperforming school when its hero principal leaves: Will it be able to sustain momentum, or will it slide backward?

“It’s critical to have stable leadership in the first couple of years of a turnaround,’’ said Justin Cohen, president of the School Turnaround Group at Mass Insight Education, a Boston-based nonprofit whose stated mission is to transform public schools into high-performance organizations and close achievement gaps.

Boston school officials said Blackstone should be able to weather Zrike’s departure because he delegated several key tasks from the start. Teachers and midlevel administrators oversee such critical areas as instruction, student attendance, and discipline.

“Anytime you lose a valuable member of the team there is an impact, but we will move onward and upward,’’ Barnes said. “I really don’t think we will skip a beat. It won’t be easy. It will take work.’’

Zrike is one of two newly appointed principals of underperforming schools who made a quick exit. Robert Martin left the Harbor Middle School in November amid circumstances the school district has yet to reveal and is on administrative leave. While Johnson has appointed an interim principal for Harbor, she has not done so yet for Blackstone.

In an interview in his office at Blackstone last month, Zrike said he never liked the notion that a principal should be viewed as a Superman-like figure, swooping in to save a school.

“The face of the school should be the teachers, not the principal,’’ Zrike said. “There is no one superhuman enough to throw a school like this on their back and turn it around. . . . This is a school where the needs are great.’’

He acknowledged that his departure for Chicago — where he started this week, overseeing 26 schools and 19,000 students — created a stir at Blackstone.

“I know some are disappointed and angry,’’ said Zrike, who began talking with Chicago about the job in the summer.

Installing hero principals is a key feature of the Obama administration’s effort to overhaul thousands of failing schools nationwide. The administration is rewarding districts with hundreds of thousands of dollars in funds if they appoint new principals as part of their turnaround plans. Bringing in a new leader, the thinking goes, sends a clear signal that districts are committed to making wholesale changes at the school.

Massachusetts strongly endorses the idea of a hero principal. Under a state education law enacted last January, principals of underperforming schools gained flexibility to implement changes, such as setting school schedules and hiring teachers outside of union contract rules.

In a decisive action, Mayor Thomas M. Menino and Johnson called a press conference in March on a day when the state declared 12 Boston schools underperforming. They not only announced the replacement of principals at five of those schools, but they also introduced the successors.

Zrike, who focused his doctoral work at Harvard University on the principal’s role in teacher retention, has long been a standout in the Boston school system. He landed his first principal’s position in his late 20s, leading the small Philbrick Elementary School in Roslindale. He later took over the Ohrenberger School in West Roxbury.

Before his appointment to Blackstone, Zrike was coaching several Boston school leaders on how to use test scores and other data to adjust teaching strategies and academic programs.

Initially, Zrike was not popular at Blackstone, angering many staff members last spring when he asked them to reapply for their jobs. He invited some to return and turned away others; a few others did not reapply. On the day he delivered the news, departing staff members described the building as a morgue.

But a new energy quickly filled Blackstone over the summer, as Zrike hired new staff members, dubbing them a dream team, and overhauled the school’s teaching techniques.

Zrike often talked with pride about Blackstone’s progress, boasting that attendance and internal test scores were improving among the school’s 600 students.

Weighing whether to leave in the middle of the school year, Zrike said, kept him up many nights. But he ultimately decided the opportunity was too good to pass up.

The school informed students that Zrike was leaving at an assembly early last month. Some students later said they hoped the school does not fall apart without him.

“He shouldn’t leave until the end of the year,’’ said Aneudy Gonzalez, a fifth-grader.

Aneudy’s sentiment is shared by many teachers, said Richard Stutman, president of the city’s teachers union.

“There is a feeling of abandonment,’’ Stutman said.

Given Zrike’s willingness to have teachers share leadership roles, Blackstone should still push ahead without him, said Celine Coggins, chief executive officer of Teach Plus, a Boston-based organization that has trained 25 percent the school’s staff to be instructional leaders.

“I think that while it is never a good thing for a school to lose a principal, particularly a good principal, in the middle of the year, having a core of teachers to navigate the school through the transition can help’’ soften the blow, Coggins said.

Many teachers remain guardedly optimistic about Blackstone’s future. Giving some solace: The school has a state-approved turnaround plan, and any changes would require state consent, making it difficult for a new leader to switch direction on a whim.

“It’s a personal loss for me,’’ said Elizabeth Goncalves Wachman, a special education teacher at Blackstone who previously worked with Zrike at the Ohrenberger. “I adore Steve. He’s a young charismatic leader. He will do great things, and so will we.’’