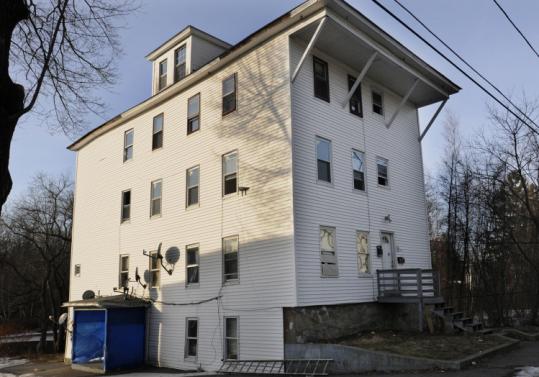 Think of it as a scarlet letter. Maybe D for dilapidated.

Selectmen in Webster, frustrated over a number of abandoned houses, are hoping to shame their absentee owners into action by prominently posting their names and contact information on the buildings in plain public view.

“We’re at our wit’s end,’’ said board chairwoman Deborah Keefe. “These properties have been a thorn in our side for a long time.’’

Town officials have had little luck convincing property owners, in many cases banks or out-of-town residents, to destroy the houses or at least board them up. In angry desperation, they are turning to old-fashioned public embarrassment.

The signs would be 4 feet by 8 feet and brightly lettered for visibility. They would feature the owner’s telephone number, so residents can lodge complaints.

“When you post the list of people who owe back taxes in the newspaper, they suddenly come out of the woodwork,’’ Keefe said. “They don’t want their name out there. So we hope this will get these people to take action.’’

The move is an unusually creative response to a widespread problem, the spate of abandoned properties in communities hard hit by collapse of the housing market. In Webster, a working-class town of about 17,000 in Central Massachusetts, many people who bought during the bubble years simply walked away from their properties when values plummeted. Town officials say banks that foreclosed on the houses have done little to maintain them.

“They leave them in limbo,’’ said Mark Dowgiewicz, the selectman who proposed the sign idea at a Monday board meeting. “They had no problem accepting the bailout, but they can’t find the money to secure unsafe buildings. It’s a national problem, and we’re just trying to get them to do the right thing.’’

Selectmen have asked town officials to determine whether the plan is legal before they proceed, but John McAuliffe, the town administrator, said yesterday that he sees no legal pitfalls.

“If the information is part of the public record, and we ascertain it the same way any taxpayer could, I think it should hold up,’’ he said.

Town officials say they have not found a precedent for their plan. But public shaming seems to be making a comeback of sorts. This summer, the mayor’s office in Reading, Pa. created an online “Wall of Shame,’’ listing owners of blighted properties. Last month, a student newspaper at the University of Wisconsin printed the names of students it said were reselling Rose Bowl tickets online at a huge profit.

In Massachusetts, the state posts lists online of the worst deadbeat dads and tax delinquents, a strategy it believes has paid dividends.

Webster town leaders said they have no qualms about trying to pressure people they say should be ashamed of themselves.

“At this point it’s a scarlet letter for the banks,’’ McAuliffe said. “They’ve been horrible.’’

Many of the properties were abandoned years ago and have been condemned. Three of them are near downtown and draw frequent complaints from residents as eyesores.

Police are often called to one three-decker where drug addicts and the homeless gather, Keefe said. She estimated that the property, owned by , has cost the town thousands of dollars in police time.

“This is just prohibitive for the town, and they’ve taken no action on it,’’ she said. “We’re not asking for much, just board it up.’’

A Wells Fargo spokesman said yesterday that the property has been moving through the foreclosure process and until recently was occupied, limiting the bank’s ability to make repairs. The spokesman said the bank planned to begin work on the building soon.

Dowgiewicz describes himself as old-fashioned and said people who neglect their property should be held accountable.

He wants the signs posted as soon as possible.

“If they give me the screwdriver, I’ll do it myself,’’ he said.