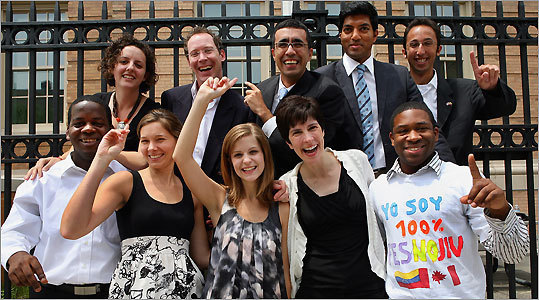 When it launched in 2009, El Sistema USA was hailed as a major coup for New England Conservatory, a chance for the school to become the national leader in spreading the revolutionary Venezuelan music education program that has changed the lives of children around the world.

Just more than a year later, El Sistema USA is looking for a new home. NEC says that it will honor its commitment to El Sistema USA’s central program — the training of 50 graduate students through the 2013-2014 academic year — but cannot support the program’s plan to expand at a cost of $125,000 to $400,000 a year.

“I’m sad and disagree, but respectfully,’’ said Mark Churchill, the retired NEC dean who serves as El Sistema USA’s director. “Having El Sistema at NEC is a tremendous advantage to the institution.’’

Many questions remain about the future of El Sistema USA.

It has not been determined whether NEC will continue to pay the salaries of Churchill and the 2.5 other staff positions of El Sistema USA starting next year, said Ellen Pfeifer, the conservatory’s public relations manager. It is also unclear what authority Churchill and his staff would have if they were to affiliate with another institution.

Founded in 1975, the original El Sistema has provided more than a million children with free lessons and instruments. The most famous product of the program is Gustavo Dudamel, the dynamic young conductor of the Los Angeles Philharmonic.

El Sistema USA, situated on the third floor of NEC’s Jordan Hall building, aims to adapt the Venezuelan program’s strategies to the United States. Starting in 2009, NEC began training the Abreu Fellows, named after El Sistema founder José Antonio Abreu. These graduates are then expected to take what they have learned and launch their own programs, or “nucleos,’’ typically in underserved communities.

Some of the first class of fellows teach or run nucleos in locations such as Alaska, Georgia, and North Carolina.

NEC’s unwillingness to support El Sistema USA’s expansion comes as the program strives to become more ambitious. Over the last year, NEC commissioned Connecticut-based consultant Gregory Kandel to put together a strategic plan for the program. His report, filed around Thanksgiving, called for initiatives ranging from the development of a new website to training a roving group of consultants to provide advice to groups around the country. Kandel’s report also called for recruiting educational experts to research and evaluate the effectiveness of El Sistema USA.

NEC agreed with these ideas but was not enthusiastic about the price tag. Pfeifer said the initiatives would have added $400,000 to the $500,000 already spent on the Abreu Fellows program. Churchill estimated the cost considerably lower, closer to $125,000 per year with some one-time costs for other ideas.

“We are not abandoning our commitment to El Sistema USA or the Abreu Fellows,’’ said Pfeifer. “That said, we did not buy into a complete El Sistema USA program and all of its costs.’’

NEC, she said, has considerable needs that speak more to its core mission as a music conservatory. For example, the school, which has a $30 million annual operating budget, hopes to launch the first phase of a $60 million construction project that will add a dorm and other upgrades to its campus.

NEC’s decision, which was made in early December, has not surprised some of the members of the first class of Abreu Fellows.

“It’s difficult to know exactly what this national entity is going to look like and what its purpose is going to be,’’ said Dantes Rameau, who recently launched an after-school orchestra and choir program for children in Atlanta. “I totally understand why NEC would be hesitant to foot the bill.’’

Jessica Balboni, a member of El Sistema USA’s national steering committee and the director of the American Symphony Orchestra League’s leadership academy, believes it makes sense for the group to spread out responsibility. She understands the conservatory’s decision.

“NEC has always had a commitment to train new leaders through the Abreu Fellows,’’ she said. “It’s something very different to say, ‘Let’s start a national service organization.’ ’’

Churchill wants to add a full-time webmaster and increase the staff’s half-time worker to full time, but he believes the other priorities are projects that could be supported by private fund-raising and grants.

He said he was disappointed that Tony Woodcock, NEC’s president, declined his request, made early in December, to appeal the administration’s decision to not support El Sistema USA’s plans. (Woodcock is in India and was unavailable for comment, Pfeifer said.) Churchill is now speaking with several institutions, none of which he would name, about a potential alliance.

El Sistema USA could end up leaving Boston, Churchill said. It has a national steering committee that includes music education leaders from across the country. This week, members of that committee, some Abreu fellows, and a representative from NEC will meet in San Antonio to discuss how to move forward.

“NEC has supported this work until now very generously,’’ said Churchill, who has been talking with Woodcock about serving as a consultant to the Abreu Fellows program. “But El Sistema is at the point where it either needs to expand or lose its effectiveness.’’

Balboni said she believes that El Sistema USA will grow and thrive. She provided a list of more than 50 programs in the United States linked to either Abreu fellows or members of the national steering committee.

“There are no answers, but boy, are there an incredibly committed group of people on the front lines across the country,’’ said Balboni. “I’m not worried.’’