Job of removing space savers bumps up against Southie tradition 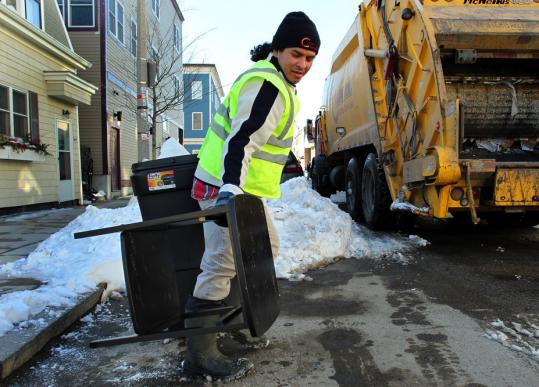 Last year in South Boston, a woman chased Vladimir Diaz down Old Colony Avenue with a knife after he took the chair she was using to reserve her shoveled-out parking spot.

On N Street, a guy tried to drag him out of his garbage truck, he said. Then there was the group of men who surrounded the truck.

“They just kept kicking it,’’ he said.

What’s most surprising about the stories is how Diaz tells them; it is not with anger, but with sympathy.

“They work hard to shovel their spot,’’ he said. “I feel sorry for them. But there’s nothing I can do. I’m just doing my job.’’

Diaz is a Boston trash collector. And, beginning yesterday, it again became one of the most treacherous jobs in the city. That’s when the mayor’s office ordered trash collectors, on their regular route, to begin taking all the space savers — cones, buckets, dining sets, whatever — that have become a post-snow tradition in many of the city’s neighborhoods.

If you put in the effort to shovel it, the ethic goes, you own it. At least for a little while.

But since 2005, when Mayor Thomas M. Menino decreed that space savers had to be removed 48 hours after a snow emergency ended, enforcement has become a dicey proposition, especially in South Boston, where the practice is rampant and militant.

As Diaz and his partner, Nilson Azevedo, made their way along East Third Street yesterday afternoon in their bright yellow Capitol Waste Services garbage truck, tossing busted beach chairs and broken baby toys into the compactor, their arrival was met with a mixed reaction.

Nick Provenzano politely moved his orange cones from the spots he’d shoveled for himself and his wife, and even chatted up Diaz and Azevedo.

“When they leave,’’ he said as the truck inched down the street, “I’m just going to put them right back.’’

Provenzano is a native of the neighborhood, and where residents stand on the practice of preserving parking spaces depends a lot on that distinction.

“I think it’s bogus,’’ said Colby Colarossi, a 26-year-old Connecticut native who lives on West Third Street. “You don’t own it. This is the city of Boston. It’s not your driveway.’’

Colarossi refuses to put out a saver on principle, even though it means she ends up having to park several blocks from her apartment.

“I don’t do it because it’s wrong, but then I leave and someone puts a chair in the spot I just left. And if I move it, my tires will get slashed,’’ she said. “It’s a lose-lose if you don’t go with the flow.’’

Karen McCormack, a 53-year-old native who was outside Mom’s Laundry on East Third having a smoke when Diaz’s truck drove by, said the old system worked just fine until Menino and the “yuppies’’ messed it all up.

“We had our rules, and they worked for years,’’ she said. “If you do the work — and I mean shovel shovel — then it should be good for at least a week. But now all these yuppies in their four-wheel-drive SUVs just plow out of the spots, don’t shovel at all, and still put a cone in there. That ain’t how it works.’’

How it works, proponents say, is as incentive. Shoveling a spot properly can take hours of backbreaking work, and they say a reserved parking spot until the snow is gone is a just reward.

“If you look around the Back Bay or Beacon Hill, where I’ve lived in the past, people just left their cars until the snow melted,’’ Rene Rasinski said as she walked two pugs through the slush. “There was no incentive. But the problem here is that people would keep the chairs out until there was just one little trace of snow left.’’

Just how long is too long has always been a source of contention, even among locals.

Menino’s 48-hour rule, many said yesterday as the snow piles remained, isn’t long enough. But deciding that your neighbors have gone too far is also risky. Moving another’s saver, locals say, is always asking for trouble.

Tristan Buechs had been circling long enough. She pulled in front of the Tan Man on L Street, stopped her minivan, looked around for a second, then got out and kicked an old television to the curb. She was going to take the risk.

When a reporter approached, she had a slight moment of panic.

She thought she was in for a fight.

“You know what? It’s been three days,’’ the 25-year-old South Boston native said, once she realized she was in the clear. For now.

“I wanted to go tanning and I needed somewhere to park. What am I supposed to do?’’

Her tone was somewhere between defiant and worried, and before she stepped into one of the tanning rooms, she asked the staff to do her a favor.