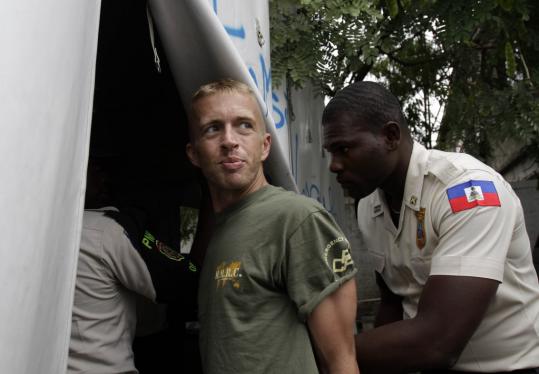 Paul Waggoner of Nantucket was escorted by police to court in Port-au-Prince, Haiti, on Dec. 15 on allegations of kidnapping an infant. Charges against the relief aid worker were dropped. (Dieu Nalio Chery/ Associated Press)
By Travis Andersen Globe Staff / December 30, 2010

A Nantucket man working in Haiti on a humanitarian mission was freed from prison there after 18 days when a judge in the country declined to bring kidnapping charges against him, his aid organization said last night.

However, the lawyer for Paul Waggoner in Port-au-Prince said his release is “provisional’’ until the judge in Haiti makes a final ruling, which could take up to two months.

“Of course, Paul is completely innocent, and there is no doubt the final ruling will be favorable to him,’’ said the lawyer, Louis Gary Lissade. “I pray this unfortunate situation will not discourage all the good American volunteers to continue to come to Haiti to help the Haitian people.’’

A bearded Waggoner said last night on CNN’s “Anderson Cooper 360’’ that being out of prison felt “awesome,’’ but that after his experience he will reassess whether he wants to work in Haiti again.

“Due to the circumstances, I think it would be good to get out of here for a little bit,’’ he said.

Other than sporting several days growth of whiskers, Waggoner looked little different after his ordeal. An aide had said he was malnourished from not having enough to eat in jail, and Waggoner himself said the conditions inside the prison were “nothing nice.’’

“I was really relieved, I’ll tell you,’’ she said in a phone interview. “It’s been a rough ordeal.’’

Waggoner sold his construction business on Nantucket to start the aid organization and fund the relief work in Haiti. He arrived in the devastated Caribbean nation shortly after the earthquake of Jan. 12.

In February the infant’s father, identified by the Associated Press as Frantz Philistin, said that Waggoner stole the baby and that the child was still alive, because its eyes would not close after death.

Materials Management said that Philistin believed Waggoner kidnapped the 15-month-old child in order to adopt or sell the child.

On CNN last night Waggoner said Philistin, was trying to extort money from him after he contacted the father to notify him of the baby’s death.

He said Philistin told him he did not want to recover the child’s body and instead wanted his remains “incinerated.’’

Waggoner left the country shortly after the child’s death because he feared for his safety, his organization has said, but he returned in March when he thought the situation had been resolved.

Two weeks ago, the child’s death certificate was presented to a court in Haiti, the aid group said, and an American doctor had signed an affidavit stating that the infant died and that the father had viewed the body.